Margate residents who have been baffled by the continual disappearance and reappearance of a communal bin have now been told it should not have been in the street anyway!

People living near the top of Trinity Hill and Fort Crescent had been using the paladin bin, which has been in place for some three years according to residents, because of difficulty with collections.

The bin disappeared when the funfair came to Margate, although it was not the fair workers that removed it. A luckless resident attempted to take another bin from the fair but was caught by their security. It then reappeared only to once again disappear shortly afterwards. 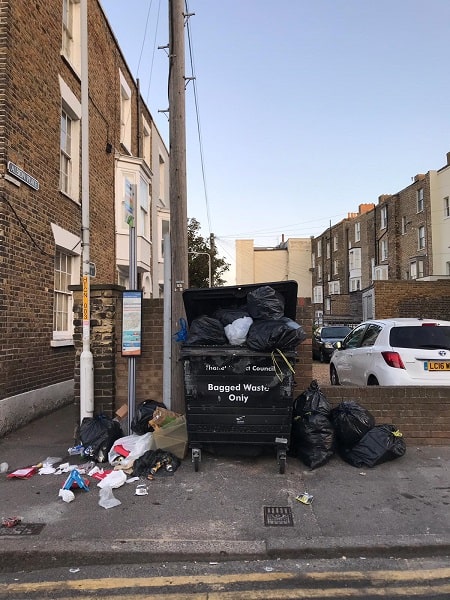 One resident said: “It has been an ongoing issue. We thought the council had been trying to solve the issue of the overflowing bin – however as they removed the recycling point in Trinity Square last year this is the only bin service for numerous tenants who do not have their waste collected or are able to recycle. The closest recycling bins are in Palm Bay which overflow constantly.

“The council provide ample bins on the sea front for tourists. Why can’t they for residents?”

In absence of the bin rubbish has piled up in the spot where it stood, with a chalked message on the wall saying “insert bin here!”

The resident said: ”It’s a battle between the council and residents at this stage. A street cleaner has been clearing it up every day. He firmly told a few of us we’d get done for fly tipping but we weren’t actually putting our rubbish there, other people have been. We were simply thanking him for his hard work but I understand his frustration. 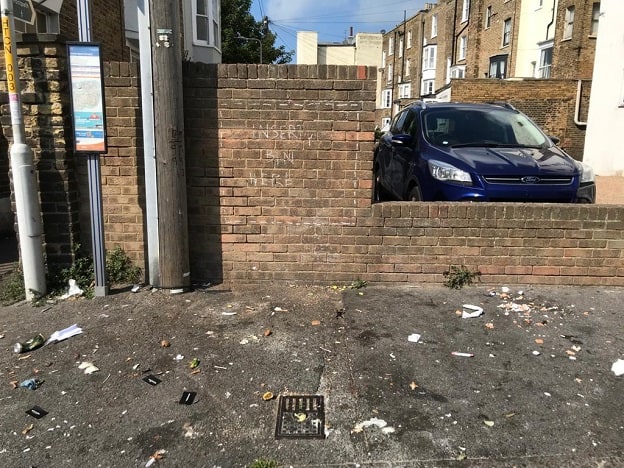 Thanet council says residents do receive weekly collections and can sign up for the neighbourhood recycling scheme.

A council spokesperson said: “The large black bin was not placed there by Thanet District Council. It was blocking the pavement and being misused by nearby residents to dispose of their residual waste and was creating significant fly-tipping issues.

“The bin was removed in mid-August and residents at both Fort Mansions and Trinity Square have been written to with reminders about their responsibility to dispose of waste responsibly, as well as being given tips on waste minimisation. Residents in these areas already receive weekly collections of their residual waste and have the option to sign-up to the Neighbourhood Recycling Scheme.

“This area is monitored by CCTV – fines have been issued by our Streetscene enforcement team and there are several ongoing investigations.

“Signage will be erected to remind people that fly-tipping is illegal and can lead to a £400 fixed penalty notice or a criminal prosecution.”