Two sisters from Palm Bay who have been on a mission to clean up the area they live in have now  joined volunteers from The Friends of Northdown Park.

Holly and Sophia Manclark, aged 8 and 5, with help from parents Donna and Scott, began their clean up mission after noticing the amount of litter across the Palm Bay estate when they were out for exercise during the lockdown restrictions.

Pharma worker Scott, 41, said the pair questioned why there was so much rubbish strewn on roads, pavements and parks and decided they wanted to do something about it.

As well as cleaning the estate, the industrious Palm Bay School pupils have litter picked outside their school, around Cliftonville Library, Northdown Park and other nearby areas. 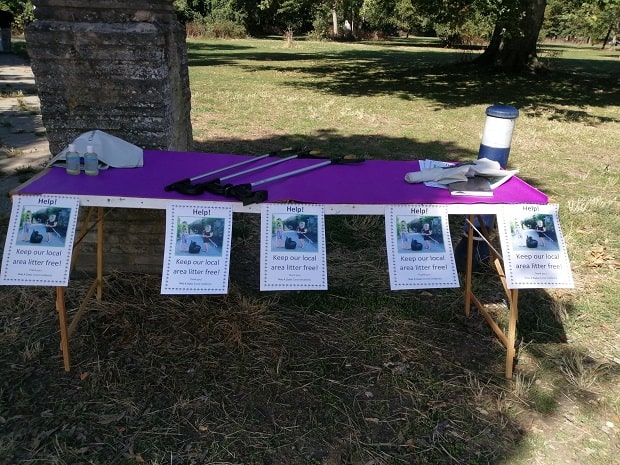 Their dedication to cleaning up after the litter bugs prompted an invite from The Friends of Northdown Park for more people to join the clear up campaign.

Scott said: “I did a short introduction asking all the children why we are doing a litter pick. I told them that obviously it doesn’t look nice, it’s awful for our wildlife, and that the wildlife can get hurt by it and when the leaves fall in autumn it buries the litter and prevents growth of plants the following year.

“I also taught them how long it takes certain types of litter to decompose. The children are now asking when the next litter pick is. The council provided us with bags and litter pick sticks which we can keep for the next pick.

“I am so proud that my girls are inspiring others like this. The plan Is the litter pick Northdown Park again in the woodland area. Then we’ll move to another park, possibly Dane Park or Ellington Park.”

There is another group litter pick this Saturday at 2pm until 3pm for the Friends of Northdown Park group.