A bid to appeal against a ruling to reject a Judicial Review on changes to stroke services in Kent and Medway has failed.

A judicial review hearing challenging the decision to close acute stroke services in hospitals including Margate’s QEQM was lost at the beginning of this year.

Two Thanet groups, Save Our NHS in Kent and Thanet Stroke Campaign, took a case to the High Court – alongside Medway Council- to fight the decision made by a Joint Committee of Clinical Commissioning Groups’ (JCCCG) to remove acute services from six hospitals in favour of three specialised units for Kent and Medway.

The cases were heard together by Judge Judith Farbey although they were brought on behalf of separate claimants.

A  decision on the location for three hyper-acute stroke units (HASUs) across Kent & Medway was agreed by the Joint Committee of Clinical Commissioning Groups (JCCCG) in February 2019.

The HASUs will be at Darent Valley Hospital, Maidstone Hospital and William Harvey Hospital. Acute services at Margate’s QEQM Hospital will be removed with Thanet patients needing to travel to Ashford instead.

SONIK and Thanet resident Marion Kepple, who was the claimant for the Thanet Stroke Campaign backed by Cllr Karen Constantine and Summer Kitchen boss Sharon Goodyer, had challenged that decision, as did Medway Council.

The Court of Appeal has now refused permission for an appeal against the judicial review ruling.

The judge considering the application for appeal has ruled there are no permissible grounds for an appeal against the judicial review ruling made in February 2020. The judicial review found in favour of the NHS on all eight of the grounds bought by the claimants.

Speaking about the outcome, Rachel Jones, Executive Director of Strategy and Population Health at NHS Kent and Medway Clinical Commissioning Group, said: “I am extremely pleased about the decision from the Court of Appeal. The original judicial review ruling found emphatically in favour of the NHS and the process we followed.

“The need to improve stroke services in Kent and Medway is as urgent as ever and this decision brings us closer to being able to move forward with the implementation of evidenced-based hyper acute stroke units, which will in turn reduce death and disability from stroke.”

Cllr Constantine said the judicial system has failed the people but she will continue to fight. She said: “Thanet residents will be angry and concerned about this surprising refusal to allow an appeal. The concerns about the journey to Ashford haven’t diminished, nor have the worries about QEQM and its future, which continues to look bleak.

“It’s plain that Thanet’s full range of health needs aren’t being met. The Judicial system has also failed the people. We should have had our appeal heard. It’s an important principle not just for the people of Thanet, but for any group that wishes to challenge erroneous decisions. I will continue to fight for improved health for Thanet.” 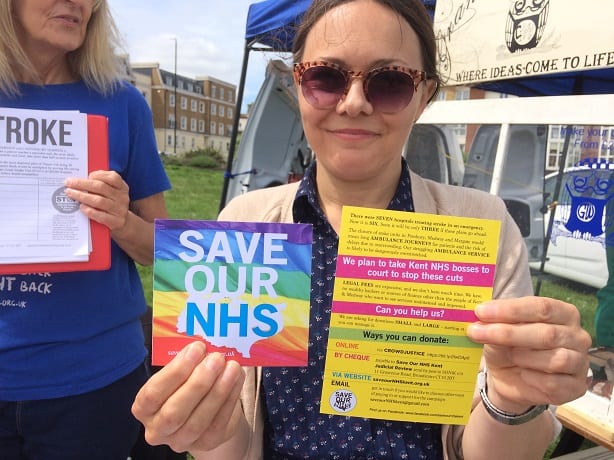 Carly Jeffrey of SONIK said: “We are very sorry to hear that Medway Council’s appeal has been refused, but we are not surprised. Judicial Review is a very limited and blunt tool, and many cases where an injustice is being done fall by the wayside like this.

“SONIK put everything we had into the JR; it took months of research and hard work. But with a Judicial Review, the judge is not obliged to consider the merits of the proposals, only whether or not the process that led to the decision was adequate or not. During the three day court case in December last year, all the NHS bosses had to do was say that they had ‘considered’ all the many drawbacks pointed out to them by the public, campaigners, doctors, staff, the Public Health Observatory and the risk assessment report. They didn’t have to disprove dangers and concerns – merely show that they had ‘considered’ them. It really is all they have to do under current laws, according to Justice Farbey.

“As soon as we learned that the initial case was lost, we approached our legal team with our intention to appeal. Three of the grounds had been found arguable by the judge, so we felt it was worth a shot, despite the low odds of winning. Having already been awarded legal aid, it was unlikely that we would have to raise much money. However, our barrister and solicitors were not willing to appeal, and we were informed that trying a new legal team would be unlikely to help.

“Our barrister did not believe an appeal would win. It was also suggested that revealing our inability to appeal might undermine and thus jeopardise the other case (Medway’s). This is why we have been silent on the issue.

“It is our understanding that the legal avenue is now exhausted. This means that the focus must now be on Matt Hancock and the referral back of the stroke plans that happened in 2019. We have written once again to the IRP (Independent Review Panel) asking if Matt Hancock’s decision is imminent. We must all now appeal to the Secretary of State for Health to reverse the plans, and SONIK will shortly be revealing how we intend to get the public involved in this.”

The Kent and Medway Stroke Programme is still awaiting the decision from the Secretary of State on the referral for an independent review of the process and says the hope is that this can now be expedited so Hyper Acute and Acute Stroke units can be implemented.

The units will be at Darent Valley Hospital, Maidstone Hospital and William Harvey Hospital

The new units are expected to reduce financial deficits in the Kent and Medway service, although a review of those finances will take place.

SONIK is hosting a Zoom public meeting on the topic of whistleblowing in the NHS, with guest speakers including Derek Richford (grandfather of baby Harry) who has taken on East Kent Hospitals Trust over the tragic baby deaths scandal.