A demonstration has been held outside Thanet council’s offices in Margate to highlight the ‘fire and rehire’ situation faced by British Airways staff.

Some 37 BA workers live in the Thanet constituency will more in surrounding areas.

Cabin crew for BA have been served notice for either an enhanced redundancy package or the choice to reapply for a similar role but on lower pay.

The airline is cutting 12,000 jobs from its 42,000 employee roll blaming the impact of Covid and warning that business is unlikely to recover to pre-Covid-19 levels until at least 2023. 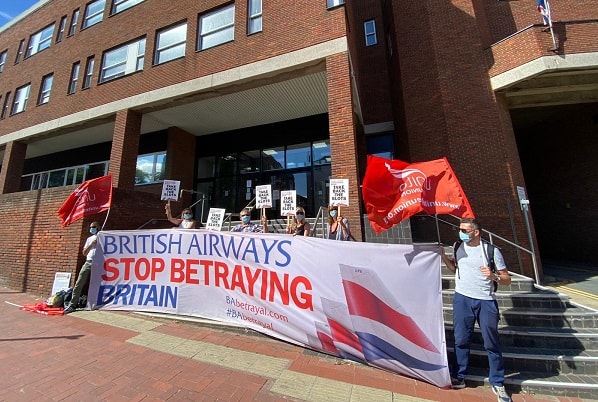 BA workers in Thanet are calling on South Thanet MP Craig Mackinlay to join more than 230 MPs who have pledged to review BA’s privileged landing slots if the airline doesn’t end its  ‘fire and rehire’ policy.

MPs have signed a pledge calling for government action. Now BA Betrayal campaigners are taking the fight to  MP Craig Mackinlay to increase the pressure on the government to act.

A recent poll revealed British public backing for tough action against BA over its plans, with voters giving strong support for the introduction of legislation to strip the nation’s flag carrying airline of its privileged access to UK landing slots.

A Survation poll of over 2000 people, including over 1219 BA passengers across the UK, revealed that 69% of all those surveyed believed the government should review the UK’s current arrangements on landing slots.

Unite executive officer Sharon Graham said: “Many thousands of BA workers are being subjected to the most brutal ‘fire and rehire strategy. British Airways are a national disgrace and actions against them will continue.

“So far, over 230 MPs have added their name to our call for BA’s privileged landing slots to be reviewed and the numbers continue to grow. BA  scorched earth approach will have consequences.” 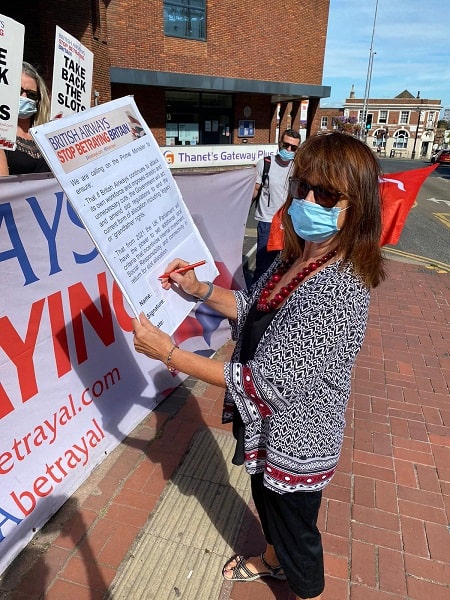 A member of BA cabin crew, who asked not to be named, said: “I have worked for BA for 23 years. The last five months have been mental torture. I am now on medication to help cope with the stress and anxiety caused by BA. Dedicated and long serving employees who have made BA billions in profit, have been thrown in the scrap heap. Using the pandemic as an excuse to impose draconian measures will see my pay less than when I started and is unforgivable”

District councillor Aram Rawf voiced his support for the cause, saying: “”It is a disaster that this government allowed a big company like BA to treat their staff like this with many dreams of their staff coming to an end. I urge both Thanet MPs to take this to Parliament and stand behind BA staff and local people.”

Fellow councillor Pauline Farrance said:“Where is our MP on this issue? He should be doing everything to support his constituents. I am proud to stand in solidarity with affected workers. “These plans will not only affect workers and their families but will have a knock on effect to on board safety and quality of service with less experience within the company.”

Mr Mackinlay  said: “There can be no doubt the aviation sector is facing serious challenges, but I regret the commercial decisions BA have announced, not least because the airline was benefiting from the Coronavirus Job Retention Scheme. This scheme was not designed to fund the wages of employees only for companies to put those same staff on notice of redundancy during the furlough period.

“Those organisations who do decide to make employees redundant should do so with fairness and they will be judged by the way they treat their employees – British Airways are no different. I have been assured by Ministers that the Department for Work and Pensions stands ready to help affected employees identify and access the support that is available.”

A petition for the cause can be found at  https://petition.parliament.uk/petitions/467094