Police are investigating a report that a 75-year-old Parkinson’s sufferer was punched in the face repeatedly by another man in the communal gardens of Alexandra Homes in Margate.

Grandad Victor Champs, who was an RNLI Margate crewman for 35 years, says he was sat in the garden on Tuesday (August 11) when he was punched in the face, falling back in his chair to the ground, and then punched again.

Dad-of-three and stepdad-of-one Victor, who is recovering from lung cancer, was left with a cut and swollen face – meaning he is unable to wear a mask for ventilation at night which is necessary for COPD and sleep apnoea.

Victor said: “I was talking to another friend when this chap shouted at me, punched me in the face, pushed me back in my chair and then started punching me again. I couldn’t do anything because I was on the ground.”

Victor attended hospital for his injuries and has been driven out of his home of 20 years because of the incident.

He is currently staying with his partner in Ciftonville. 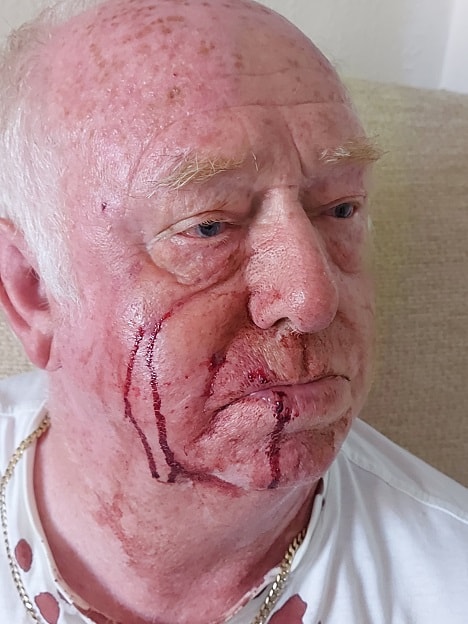 The  former doorman and delivery company worker says he is upset that wardens from the alms house site have not assisted him.

Alexandra Homes offers independent living for elderly people in flats and cottages with an alarm service and wardens. Victor has previously worked for the homes as a gardener and maintenance man as well as living n the site.

He said: “I am so annoyed that nothing is being done and nobody seems to want to know about it. I can’t wear my oxygen mask because my face is so sore and I am now staying at my partner’s flat to get away from it all but no-one seems interested. I have been on to the police and to the wardens. If being punched in the face when you are 75 and getting over cancer isn’t a crime I don’t know what is.”

Victor, who admits there had been past disagreement with the other man, says he has only got through thanks to the care of his partner and his family.

Granddaughter Sophie Champs said: “Grandad’s worked with the RNLI  helping others but the one time he needs someone to help him after an unprovoked attack no one seems to be there for him.”

Son Lee Allen added: “It is not good enough in this day and age that this can happen to an OAP and no one wants to know.”

A Kent Police spokesperson said: “Kent Police is investigating an assault that took place at a residence in Tivoli Road, Margate at around 4.45pm on August 11. A man, in his 70s, reported being punched by another man.

“Enquiries regarding the circumstances of this incident remain ongoing.”

Trustees at Alexandra Homes are aware of the incident and will be discussing the circumstances.

A statement from the Board of Management, Alexandra Homes Almshouse Charity, says: “The Alexandra Homes is a small independent almshouse charity set up in 1865 to provide affordable housing to the elderly residents of Margate. We own 33 flats and cottages.

“Appointments are made based on strict criteria of entry and residents all live independently. We are not a residential home
nor care home. The charity is managed by a Board of Trustees.

“The Trustees are aware that an incident took place between two residents on August 11 and have interviewed both residents and all eye-witnesses. The Trustees will now fully discuss the facts presented.”