A cyclist whose bike was mangled after he was hit by a vehicle in Margate on Sunday (August 9) ended up spending his birthday in hospital and is now off work due to his injuries.

Enrique Cruz, 38, was riding home to Westgate after his shift at Budgens Broadstairs when the vehicle collided with the rear of his new, £400 bike, in Marine Terrace, Margate, at around 11pm.

Enrique ended up in the road and the bike was crushed under the front of the vehicle which had travelled around 100 yards unaware of the incident until being flagged down, says stepdaughter Ria Baxter.

Passers-by, including an off duty paramedic, helped at the scene, contacting Enrique’s wife Pam, and making sure he was comfortable until help arrived. 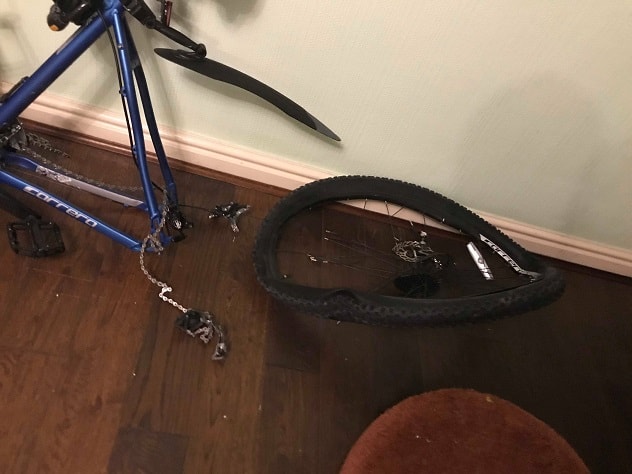 Enrique was taken to QEQM Hospital and did not get home until 5am the next day – his birthday – and then had to return at 11am, finally getting back home at 4pm.

He suffered cuts, bruises, skin was scraped off his arms, legs and backside and ligaments were torn in his left knee.

Pam said: “An off duty paramedic helped and stayed with Enrique until I got there. There was a security woman and a chap directed traffic. I would really like to thank them.

“We had just saved up for the bike and had all extra bits on it and now it is all smashed up. It makes me feel ill to think it could have been him under the vehicle.

“It has been frustrating as no-one has got in touch. We haven’t heard from the police and the driver’s insurance company is in liquidation so we don’t even know what will happen with that.

“Enrique has got to have time off work as he can’t stand behind the counter or fill shelves while he has this brace on his knee.

“It is frustrating and I am very upset.”

A Kent Police spokesperson said: “Kent Police was called at 11.21pm on Sunday, August 9 to a collision between a cyclist and a car.