Cliftonville mum-of-two Paige Crow, her dad – who was driving – her partner and a friend were in the vehicle when the fire ignited. They were driving back from Westwood and had just gone past Margate Caves when several vehicles beeped to alert them of the flames under the car.

Paige, 20, said: “We got a beep from a taxi and then a couple more beeps and someone screamed out of their window ‘there’s a fire under your car.’

“My dad pulled over and we all just jumped out of the car and I ran to Aldi, grabbed their fire extinguisher and said ‘I need this.’ I was thinking to just try and put the fire out and save the car.” 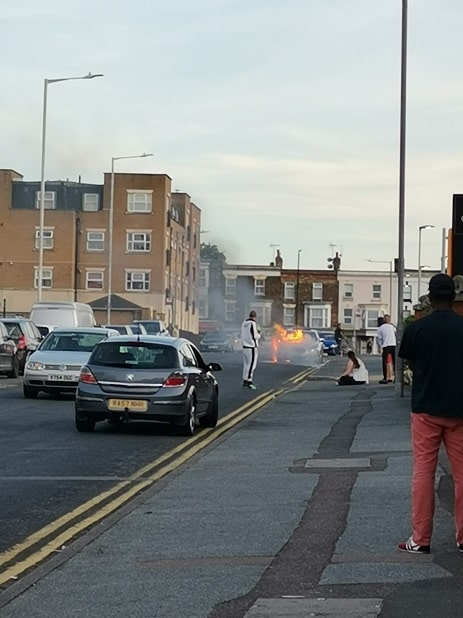 The fire service was called and took around 10 minutes to arrive. During that time staff at Aldi came out with more fire extinguishers to try and help, as did several onlookers.

Paige said: “It was really smoky and there were a couple of bangs but we did not think there would be an explosion because it is a diesel car, although it did have a full tank which was a bit worrying.

“Lots of people tried to help and blocked off the road and then the fire service arrived.”

One fire engine was sent to assist and firefighters wearing breathing apparatus put out the blaze using a high-pressure hose reel.

Paige, her dad, boyfriend and friend were all unharmed.