A crowdfunder has been launched in a bid to apply for a Judicial Review over the decision to approve a Development Consent Order for Manston airport.

Chair of Ramsgate Coastal Community Team Jenny Dawes – who says she is acting alone but with a groundswell of community support – has a £12,000 target in a bid to launch the legal challenge.

A Judicial Review will look at whether the Government followed correct procedure in reaching the decision to approve the DCO for RiverOak Strategic Partners.

The Department of Transport approved the application to create an air freight hub at the site despite the Examining Authority panel of Martin Broderick, Jonathan Hockley, Kelvin MacDonald and Jonathan Manning recommending to the Secretary of State that development consent should not be granted.

The approval makes Manston the first ever site to gain a DCO for an airport.

The application was accepted for examination in August 2018 and it was completed on 9 July 2019.

RSP says it will reopen the airport in a £300m project to create an air freight hub with passenger services and business aviation. Plans for construction will be phased over 15 years and will include freight stands and four passenger stands for aircraft as well as warehousing and fuel storage to meet the forecast demand.

There are also plans for education and training, flight training school, business aviation and passenger services.

But Jenny Dawes says her action is being launched due to the decision being made against the examining panel’s advice.

She says she fears for the impact locally – particularly Ramsgate – and on the climate.

She says: “With the support of those affected, I’m launching an application for a Judicial Review of the Secretary of State’s decision.

“The legal team is in place but at least £12,000 is needed to start the process, with a call for more if the application is accepted.”

Laying out her reasons for opposition to the airport plan she writes: “This is against the advice of the Government’s own planning experts, which sets a worrying precedent in the face of air pollution and climate change.

“According to the Government’s own experts, re-opening the airport will damage the local economy and impact negatively on the UK’s carbon budget and our commitments to the Paris climate agreement.

“The cargo-first development at Manston will handle the noisiest and most polluting type of aircraft, planes not even allowed at Heathrow. These are also the most expensive way of moving freight.

“The opening of a dedicated cargo hub will cause irreparable harm to the people, the natural environment and the economy of East Kent. Residents in the seaside towns of Ramsgate and Herne Bay, and in surrounding villages, will be living under low-flying, heavy-duty, highly-polluting aircraft. Some will be a mere 500ft below the flight path.

“It will ruin our health and well-being as well as blighting the tourist industry on which so many depend. This will not only be a disaster for local people and our towns and villages, but also for the climate change obligations of the UK.” 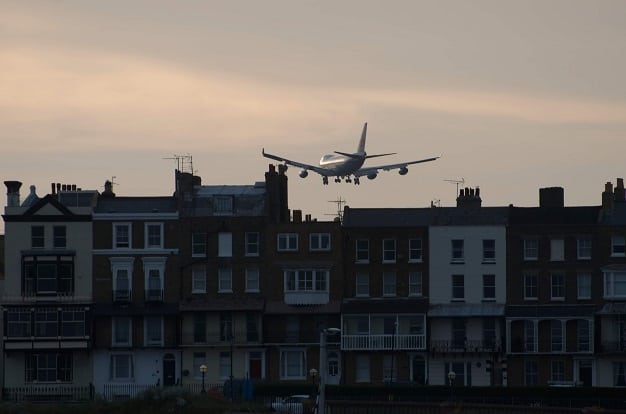 A spokesperson for the No Night Flights campaign said: “No Night Flights is delighted to note that a Ramsgate resident is prepared to question the decision to allow the DCO for Manston Airport. When the news was announced a week ago, against the very clear guidance from the Examining Authority that weighed up evidence of the proposal and the effects it would have over Ramsgate, Herne Bay and surrounding areas there was an air of disbelief.

“With an amount of evidence that outweighed any other DCO the four appointed Planning Inspectors came to the decision this was not a viable proposal on various grounds, such as health, pollution, need amongst other reasons. Therefore we support a challenge of that decision very much and can only get behind this chance to highlight exactly why the decision was made.

“There has been a lot of unfounded publicity that the majority in the area want an airport, but NNF has always held the line that there is little support for a cargo hub, that will not have passenger flights until far off in the future and will technically have night flights. The threat to our towns and health is real.

“It has been uplifting to see so much local support, and so quick. The crowdfunder passed its first target of £12,000 within two hours and is still going strong. There are people out there that have been quiet and waiting for a chance to show that they do not want a cargo hub. They can’t be ignored any longer it seems.

“People are beginning to realise the amount of air traffic that will be allowed over the area, holding patterns blighting Birchington, Margate, Broadstairs and beyond, this is not a proposal for small passenger airport it once was. We are very excited to see what happens next.”

The panel conclusion was that the socio-economic benefits of the development were overstated, and that the development would have an adverse effect on tourism in Ramsgate. The panel said that the Applicant’s education, training and skills commitments would benefit Thanet and East Kent. When taken together the ExA considered the Development would still generate a socio-economic benefit to Thanet and East Kent, but such benefits were substantially lower than that forecast by the Applicant.

However, the letter on behalf of the Secretary of State for Transport disagreed with that conclusion, saying: “The Secretary of State disagrees and concludes that there is a clear case of need for the Development which existing airports (Heathrow, Stansted, EMA and others able to handle freight) would not bring about to the same extent or at all.

“The Secretary of State concludes that significant economic and socioeconomic benefits would flow from the Development to Thanet and East Kent as well as more widely including employment creation, education and training, leisure and tourism, benefits to general aviation and regeneration benefits.

“In conclusion, the Secretary of State considers that the public benefits significantly outweigh the harm caused by the Development due to noise and vibration impacts, taking into account the restrictions to be imposed by him, and also acknowledging that the airport has operated lawfully without restrictions in the past.”

Tony Freudmann, director of RSP, said it is not unusual for government not to follow an examining panel recommendation.

He said: “The decision had always been with the Secretary of State and he said he did not agree  with the recommendation, especially the assessment that there was not a shortage of capacity.”

Mr Freudmann says there are  a number of restrictions put in place as part of the order – including a ban on night flights, noise control quotas and caps on the annual air traffic movements for cargo, passenger and general aviation at 18,000 cargo movements and 7,000 passenger movements annually.

He said plans include ‘carbon neutral’ measures to meet the Paris Accord and RSP is ‘comfortable’ with the ability to reach those.

He said measures would include: “using electric and hydrogen powered vehicles, keeping the number of road users to a minimum (with the use of local employees) and hopefully being able to take cargo to Port Ramsgate.”

Construction work at the site is expected to begin next year – when the Department of Transport’s deal for lorry parking  at the site has expired, with opening predicted for early 2023.

Restrictions imposed by the Secretary of State  include: