A heartbroken couple from Margate are warning people to thoroughly research any online pet sellers they might be thinking of using after their tiny puppy died just days after they bought him.

Bradley Linton and Becky Hopper bought tiny ‘Oreo’ through an online seller but were duped by the breeder who gave false information regarding the pup’s breed, age and vaccinations.

The lettings agent worker said: “After weeks of trawling through puppy adverts and with a limited budget we found an advert for a Cocker Spaniel/ Shitzu puppy and started making enquiries with the seller via text, sure enough within a few minutes we were having a conversation over the phone. Everything seemed perfect, microchipped, jabs, wormed and paperwork all in order with the seller also dropping the price from £900 to £850.
“The seller said that he had one puppy left and was happy to meet us for a viewing. We hopped straight in the car and drove the 115 miles to meet the seller in Buckinghamshire.” 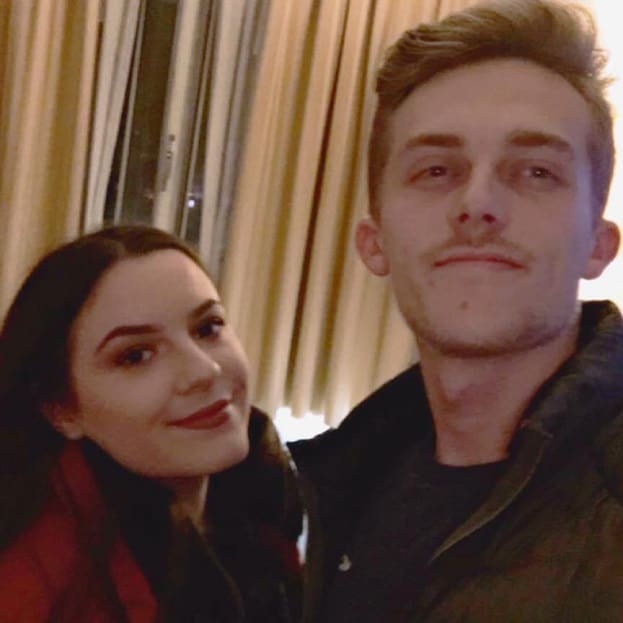 When the couple arrived they were told to meet the seller near a school as his ‘elderly neighbours were getting upset at visitors during the Covid-19 pandemic.’ They were also told they couldn’t see the pup’s mother because she was in the house.

Despite this, the pair fell in love with the pup, paid and set off home.

However, they then found that the paperwork said the pup, who they named Oreo, was a Jack Russell. And more problems came to light after family advised a visit to the vets because Oreo was so tiny. They confirmed Oreo was only approximately 6 weeks old, wasn’t microchipped and that his injections paperwork was also likely to be false.

Bradley said: “Six days into Oreo’s story we found ourselves with a very lethargic little boy who then started being sick.

“We rushed him to the vets and left him in their capable hands, a short while later receiving a call saying that he had perked up with treatment but that he was still very ill.

“The wait was agonising although very short as a couple of hours later we received the call that no one wants, Oreo was unable to breathe and would pass away, could they have consent to euthanise him to make sure he didn’t suffer anymore.

The couple reported the incident to the RSPCA and say they were shocked to hear how common this type of ‘con’ is.

Now they want to find a way to make sure others do not fall victim to unscrupulous breeders and are planning to create a website for trustworthy sellers.

Bradley said: “So many of the sales websites like the ones we looked through have no way of verifying the seller. Small puppy breeders aren’t regulated in any way until they have more than three litters in a year or are advertising themselves as a business breeder.

“The law simply doesn’t cover anyone outside of that. Although there is plenty of guidance out there as to the do’s and don’ts there is no accountability and a lot of the sales websites just verify the email address of a seller leaving no paper trail whatsoever.

“We plan to construct a website for trustworthy sellers of unregulated and regulated pets alike, whether you fall into a regulated category or not our aim is to provide a website for sellers and buyers to be contactable before and after pet sales,.

“We plan to collect data from both parties which will allow for both to be contacted in the event of a problem or just updates of how the pet is getting on. Identification and address verification will be a requirement along with the uploading of an individual photograph of each pet to be sold, each advert will then be looked over by a moderator who will approve or decline the advert after carefully considering all of the guidance given.”

Bradley says the site will also have a re-homing / adoption area  and a reporting feature for information to be passed on to local authorities and the RSPCA.”

They hope to raise £1,500 to design a platform for users to be able to sell from and fund the upkeep of the site for the short term.

Chief inspector Ian Briggs, from the RSPCA’s special operations unit, said: “This story is incredibly sad but is, unfortunately, something we hear all too often. We have investigated more than 28,000 complaints related to the illegal puppy trade in England and Wales over the last decade and we hear the same stories time and time again.

“We would urge anybody thinking of getting a puppy to be extremely cautious when researching who or where to buy from, and we’d encourage people to first consider adopting instead of buying. Sadly there are many unscrupulous breeders and sellers out there who are willing to exploit the demand for certain breeds in order to make a quick buck, very often at the expense of the dogs’ welfare.

“As the demand over lockdown for pets has surged, we fear that even more criminals and conmen are cashing in on unsuspecting members of the public and more dogs are paying the ultimate price.

“That’s why we’re calling on any prospective puppy buyers to do lots of research before getting a puppy and to use The Puppy Contract to help them buy a happy, healthy dog from a responsible breeder.”