Staff will celebrate the 90th birthday of the Queen Elizabeth The Queen Mother Hospital in Margate on Friday (July 3).

And one nurse who will have plenty of memories to share is Sue Leach, who has worked at the hospital for half its life – an incredible 45 years.

The 63-year-old clinical nurse educator started as an 18-year-old student nurse, living in the nurses’ home above the hospital, and has worked on most of the wards around the hospital.

She said: “I didn’t actually want to be a nurse – I started off in dentistry and was looking for something else so I applied for the training and got in, much to my parents’ horror.

“They thought it was a dreadful career choice for me, although they did change their minds eventually.”

Her initial training was six weeks in the classroom at Devon House, where one room was set up as a ward and students practised bed-bathing dummies and injecting oranges.

Sue would smuggle her boyfriend – now husband – to her room via the lift from the basement, and spent summers sunbathing on the hospital’s flat roof after climbing out of a bathroom window.

She said: “I know Margate hospital inside and out, and I have so many fond memories. I have seen a lot of people come and go. I don’t know of anyone who has been around as long as I have. 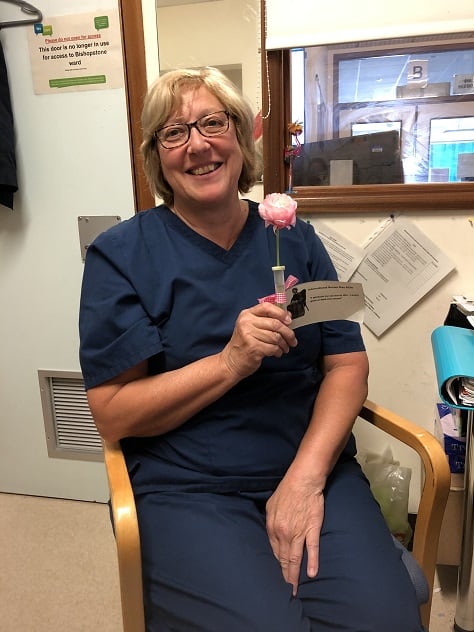 “I’ve shaken hands with most of the royal family, including the Queen and the Queen Mother, and I was at the opening of the new part of the hospital, when it became the QEQM.”

Sue also worked at the old Seabathing hospital, where she met the Queen, and as a Marie Curie nurse, but most of her career has been at the QEQM.

She was made ward sister on Cheerful Sparrows, a female surgical ward, when the new hospital opened, and stayed there for 20 years before retiring – only to return for two days a week in her current role.

She said: “There have been a lot of changes, of course. We used to wear starched pinafores and hats; but when you swung the curtains it would knock your hat off.

“We had no MRI or CT scanners and we used to send patients to theatres without knowing what was going on inside.

“Sometimes the surgeons would open them up, take a look and close them again because there was nothing they could do – we called those ‘open and shut’ cases.

“Patients would stay in hospital longer and those who were the most well would do the tea trolley in the morning.”

There was originally no intensive care unit at the hospital so staff would not see the very sick patients they now often care for.

All observations were done manually, without machines, and recorded on paper. Now they are entered via an app.

Staff had to observe a strict hierarchy, with no one addressed by their first name.

Sue said: “I was always Nurse Smith. I remember Mr Butler was the chief surgeon.

“He would do ward rounds once a week and the patients had to be in their beds, sitting up, looking smart and well-kept. Nurses made themselves scarce – we used to hide in the bathrooms!

“We didn’t have lots of physios and occupational therapists and social workers and all the people who make up the multi-disciplinary team who care for patients now.”

Sue also remembers an active social life based around the bar in the doctors’ mess, with regular parties including one that had to be broken up by the chief surgeon after the night sister tried and failed.

And at Christmas, each ward had a turkey and the surgeons would come in to carve it.

Sue said: “My first Christmas as a student nurse they brought out a drinks trolley and all the patients had a tipple before lunch.

“I was also part of the hospital drama group and we put on a panto each Christmas, and wheeled patients in their beds of chairs along to watch it.”

She said: “I just love looking after people. I particularly liked general surgery, because you can see someone visibly getting better. They would come in with a problem, have surgery and we would get them better.

“But I also I like looking after staff and seeing them develop and improve.

“We have had some traumatic times and some very sad times but we have also had so much fun and I have loved being part of such a great team at the QEQM.”