Balloons, gifts and a card from the Queen were among the 100th birthday gifts for Ramsgate resident Ivy Clayton.

She moved to Ramsgate with husband Bill, a bus driver, in the early 60s. Ivy worked at Harrison’s café on Ramsgate seafront before taking a job at Tesco in York Street – now Wilko – up until her retirement.

Friend Margaret Penn, who visits every fortnight sometimes accompanied by daughters Michelle and Stephanie, says Ivy had been friends with her parents and was like a mum and nan to the family.

Margaret said: “When Ivy lost her husband my mum helped her out a lot. Since I lost my mum she has always been there for me and my girls. She is a wonderful person who would give someone her last penny.” 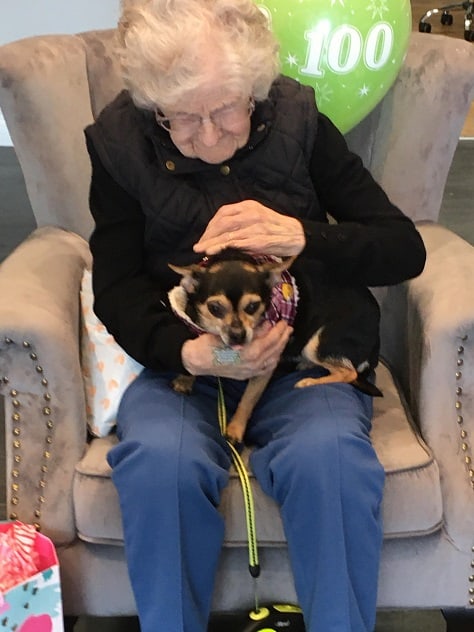 Ivy was living in Clements Road and visiting the care centre in Boundary Road a couple of days a week. She took the decision to move in as she wanted the extra company.

A party had been planned for her 100th but covid restrictions meant this had to be scaled down to a visit from Margaret and Michelle, plus her dog.

Margaret said: “It made me sad as we could not even give her a hug but she said she would hug the dog instead.”