A paediatric nurse and mum-of-one who followed in her late father’s footsteps to be an on-call firefighter is hoping to inspire others to do the same.

Kirsty Bylett, 30, is an on-call firefighter for Kent Fire and Rescue Service in Margate, where her dad, Alan, was also a retained firefighter.

Now, three years after her father’s death, she provides day cover at the station in Grosvenor Gardens.

She said: “I’m just following in my dad’s footsteps. He’d be so chuffed to see me now.

“If I can be a positive role model for anyone considering being part of the fire service, then that would be an absolute honour.”

In the evenings, Kirsty works in paediatrics at the Queen Elizabeth The Queen Mother Hospital, where are colleagues are supportive of her firefighting work.

Zoe Newman, Head of Nursing for Urgent and Emergency Care, said: “Kirsty is a great asset to our team and I am sure the same skills that make her a fantastic nurse prove invaluable as an on-call firefighter too.

“We are so proud of her for demonstrating her commitment to helping others by giving up some of her off-duty time to help as an on-call firefighter. She is an inspiration to us all.”

When Kirsty’s not nursing, or riding in a fire engine, she enjoys spending time with her 10-year-old daughter and family, or training for her next bodybuilding competition. 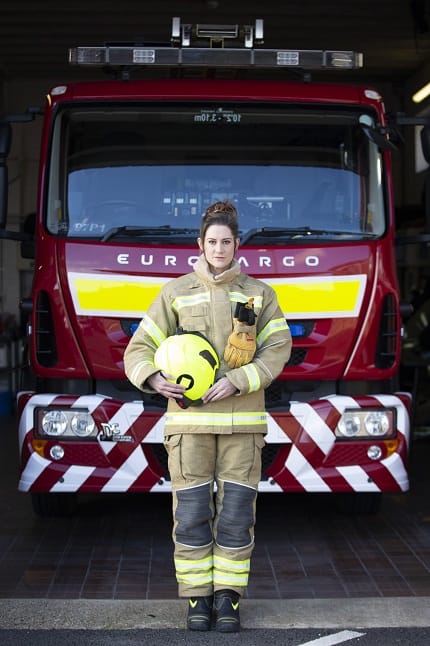 She said: “When people find out that I’m a paediatric nurse, I’m a mum, I’m into the gym and I’m an on-call firefighter, the first question usually is how do you juggle it all?”

“But honestly, it’s not that difficult to juggle everything. It just takes organisation. Just like a normal mum, I do the school run and spend the evening with my daughter before going to work. So, being able to offer day cover as an on-call firefighter fits in nicely.”

Kirsty lives a short distance from the station, which is one of the requirements of the on-call role. If the crew is called to an emergency, Kirsty is alerted by a pager and within minutes, she’s on a fire engine heading to an incident.

She said: “The best part of being an on-call firefighter is the variety. Your pager goes off and you never know quite what you’re going to.

Each of our on-call firefighters has a story to tell about why they joined us in this unique role. Kirsty’s following in her father's footsteps & is an on-call firefighter, as well as a paediatric nurse & a mum. What’s stopping you from joining us? More: https://t.co/nG7vMO95gg pic.twitter.com/uxyup6yprS

Kirsty applied to KFRS after being inspired by her dad’s on-call service and hopes she can motivate more people to do the same.

She added: “Being a woman in the fire service is quite an empowering feeling. To me, it doesn’t matter as no two firefighters are the same.

“Regardless of who you are, if this is a career you want to progress into, or you’re looking into, do a bit of research and if it’s for you, then I’d say go for it.”

On-call firefighters receive an annual wage to reflect the time they commit to being available, plus additional payments for certain activities. They are expected to undertake and attend training at least once per week, and be available for at least 50 hours a week.