The Kitchen CT9 in Cliftonville had barely celebrated its first birthday when it had to close up shop on March 20 due to the coronavirus pandemic.

The community cafe works closely with residents to provide nutritious, low cost food with many of their customers paying forward meals for those less well off.

It operates on a system of taking surplus food that would otherwise go to waste from local shops and superstores, and then creating a simple menu with affordable prices.

Set up by the Thanet Iceberg Project, founded by parents-of-four Ann Newstead and Alexander Roarke, it operates a two tier pricing system: “need it” and “want it.”

The ‘need it’ price will be set as low as possible to make good food in a cafe environment affordable for everyone in the community, including families on tight budgets or relying on benefits. The ‘want it’ price is that, whilst still being excellent value for money, the customer has the chance to pay forward the profit from their meal to help those in more difficult circumstances.

Since opening in March 2019 The Kitchen has recycled 11 metric tonnes of surplus food through FareShare, giving away around one-third of that outside of café use. That figure does not include food also recycled from other sources such as supermarkets.

Free meals are also given to those in extreme need. But The Kitchen CT9 goes beyond the food, offering to help with the root causes of being unable manage and finding the right agencies to help a person.

During the pandemic the Iceberg side of the organisation continued to help people who were in need of items such as furniture or support at meetings and now the couple, who have been married for 27 years, are preparing to reopen the café on July 4 – Covid restrictions dependent – and say they hope anyone who now finds themselves struggling will seek their help.

Roarke, 53, said: “We are expecting to get busy with a lot of people who were living normal lives up until a couple of months ago but have since had their world turned upside down through no fault of their own. Six months ago a couple may have been working, paying a mortgage, eating somewhere more expensive and now they don’t know where they are in life.

“I would say we are there for everybody, there is no stigma, come in for a free meal, or pay less for your meal, and ask for help if you want to. That’s what we are here for, we do not want people to let pride get in the way. If someone didn’t come in because they were embarrassed that would break my heart.” 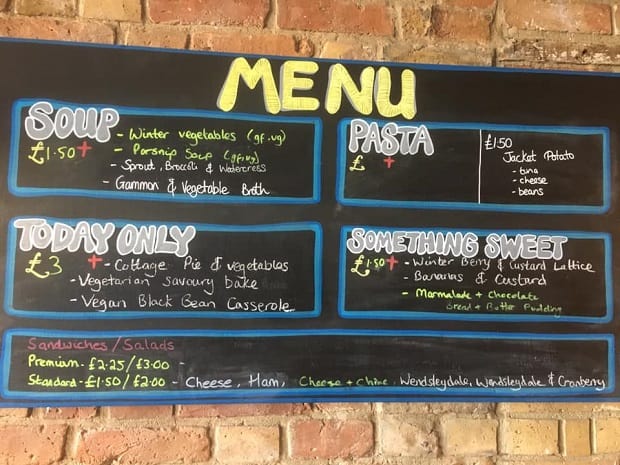 The couple, who moved to Thanet from Bromley seven years ago, had always planned a community venture and the Kitchen was born from an amalgamation of their ideas.

Roarke said: “After 27 years of thrashing the idea about we said ‘if not now then when?’ It just came from the idea of feeding people, looking after the most basic needs and helping people to be more than their current situation allows. It is working with people to overcome poverty but also working against the causes of poverty.

“That is the difference between what we do and what some others are doing. We are interested in why people are coming to us rather than them just coming and getting food.

“If people can’t necessarily fend for themselves then they might need help finding the right services. We don’t give drug or mental health advice, we signpost to the agencies that do and if needed will go with someone for their first appointment to introduce them to the experts.”

The Kitchen CT9 is also part of the Community Fridge Network, allowing local people to share their own surplus or unwanted food. The average UK family wastes £810 a year by throwing away food and drink which could have been eaten.

Preparations for reopening are already taking place with Rourke and Ann, 50, putting in place distancing measures and a sanitiser station.

Rourke said: “Things will be a little bit different. We have moved ‘the fridge’ downstairs.

“So, instead of people going and taking what they want they can now ask and we will go and get it for them. We have a screen barrier, a hand sanitiser station at the front and have spread the tables out.

“It does feel though like we are taking the hospitality out of hospitality and all those reasons why people go out to eat, closeness to others, personal contact, all the things that are going for now.”

The Kitchen can usually serve 30 covers. Reorganisation means it may still be possible to do this but if people come in as singles rather than groups it would reduce capacity to as low as five covers.

Despite the challenges Ann and Rourke are looking forward to reopening. Rourke said: “Come and see us, have a chat and if you need help we will try and point you in the right direction to get your life back on track.”