The MP, who has caused something of a storm with a recent column about the Black Lives Matter protests and a social media posting about the removal of statues, is suggesting Ramsgate becomes the resting place for “unloved, unfashionable or truly despised” statues.

He says with a reappraisal of historical public art in full flood across parts of the country, following protests in the wake of the killing of black American George Floyd by police in Minneapolis, and with it “demands for the tearing down of statues of luminaries of old now deemed as unacceptable under the microscope of a 21st century perspective” the idea could now come to pass.

Mr Mackinlay says such sites around the globe have become significant and successful visitor attractions.

The MP said: “I was a trustee of the Medway Sculpture Trust for many years across my time as a councillor. The team put together the funding for and completion of a successful modern bronze sculpture named ‘The Mariners’ on St Mary’s Island, Chatham. It remains to this day as a significant piece of contemporary art.

“I have long harboured the desire to see more public sculpture since visiting a sculpture cemetery outside of Vientiane in Laos many years ago. I’ve kept the idea alive for the appropriate moment. With a new surge of historic revisionism taking hold, why not create something bold in Ramsgate giving a new home for unloved statues from around the world, and a new opportunity for domestic ones as well which might well be looking for a new home?

“From Saddam Hussein to Karl Marx, Abraham Lincoln and Gandhi to a currently soggy Edward Colton from Bristol, all could have a new lease of life with appropriate historical context and educational focus whether loved or despised. This could become a significant tourist attraction and I have identified land on the Westcliff, next to the boating pool as a perfect, underused site for such a new scheme.

“I am writing to the Chief Executive of Thanet District Council to enquire whether this land could be made available, and also intend to establish a new charitable trust for East Kent to promote public sculpture across the area. This could be really exciting particularly as we have such a vibrant creative sector locally, with the new charity assisting in the establishment of the new King George IV sculpture currently being completed by local sculptor Dominic Grant.” 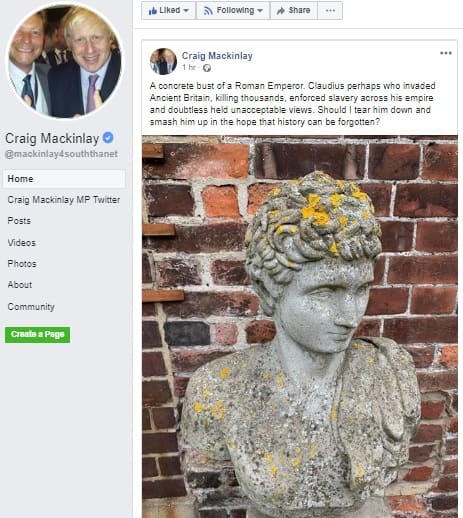 A post today (June 10) on the MP’s facebook alluding to the removal of statues, including the removal of one of 18th century slaver Robert Milligan and the toppling of the Edward Colston monument in Briostol, has caused some outrage with one commentator saying: “Craig Mackinlay is a long time way from covering himself in glory here.”

A second Thanet Black Lives Matter protest is being held on Saturday, June 13 at noon with a march from Ramsgate town centre to Margate seafront. This will be followed by kneeling for 8 minutes and 46 seconds. It follows a peaceful demonstration held in Margate last Sunday.

Participants are asked to wear protective masks, follow social distancing and bring food and water. They are also asked to wear black with one colourful item.

An event page for the march says: “When we arrive in Margate we will kneel for exactly 8 minutes 46 seconds in silence. (This is inhumane amount of time Derek Chauvin had his knee on George Floyd’s neck) This will be to show our respect for George, that lost his life to the racist mistreatment and brutality that the police and justice system delivered.”

Concerns have been raised over an organised gathering during the need for social distancing due to the covid pandemic.

Protesters say they will social distance but for those who have concerns these areas of Ramsgate and Margate may be busy during the protest times.