The Thanet Trees group is demanding a biodiversity strategy for the isle is put in place urgently following ‘destruction’ of a woodland wildflower verge at Northdown House and other wildlife habitats across Thanet.

The group says mowing at Northdown House eradicated a woodland wildflower verge ‘in its prime’ highlighting that 97% of wildflower meadows have disappeared since the 1930s.

A spokesperson for the group said: “This wildflower woodland verge was an incredibly important biodiverse habitat for wildlife.

“Cow Parsley and Alexanders in full bloom are essential food for pollinating insects, including butterflies and bees, during the month of May. For this reason there is a national campaign for #nomowmay. Between 1980 – 2013 each square kilometre in the UK lost an average of 11 species of bee and hover fly. How many insects lost their lives and habitat at this wildflower meadow at Northdown House?

“Blackbirds, thrushes, robins, dunnocks and wrens rely on this habitat to nest and forage. They will struggle to feed their young if foraging habitat is destroyed during nesting season.

“Small mammals such as voles and shrews live amongst the flowers. Slow worms and grass snakes adore woodland edge habitat, which provides both shaded places and open areas for basking. These protected species are facing an onslaught of destruction this year across Thanet. We have anecdotal evidence of dead slow worms due to the decimation of habitat at Westbrook and Minster. It is illegal to harm or kill them – so what is being done to check for their presence before mowing?“

However, there have also been complaints of a lack of mowing at King George VI Park in Ramsgate. 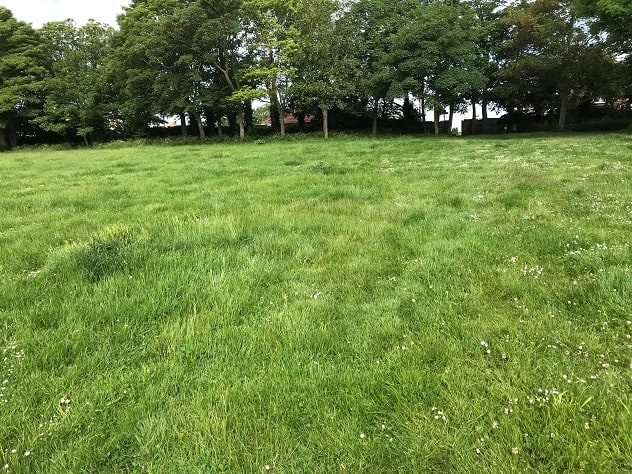 He said: “It is an embarrassment. I don’t ask for much but our park areas need to look decent. This is not an area of special natural interest, daisies and dandelions are not ‘wildflowers’. It is a place for people to walk through and children to play in. You can’t do that in two foot high grass.”

Cllr Steve Albon, Thanet council Cabinet Member for Operational Services,  said:“There is always a balancing act in relation to grass-cutting as some residents want grass cut regularly whilst others would like to see it left longer to attract wildlife.

“We have been working with the Bumblebee Conservation Trust and now have two sites (Sunken Gardens in Westbrook and Foreness Point at Palm Bay) in Thanet which are cut less throughout the year to encourage wild flowers and bees.

“Grass-cutting has been reduced for most of the lockdown period, however some of our sites are now becoming substantially overgrown which will mean they will soon be too long for our grass strimmers, tractors and mowers.

“Not managing the grass, especially at this time of year, would also require us to hire specialist equipment to tackle overgrown areas which would then come at an additional expense to the council.

“It’s also important to ensure overgrown grass does not pose an unnecessary risk to health and safety as longer grass can make it difficult to spot things you’re walking through, such as broken glass or dog faeces. This is especially important in areas close to playgrounds.”

Thanet Trees says the Northdown House site is not near a play area so it is unlikely there will be broken glass or dog faeces in overgrown. The group suggests paths could be cut through to enable easier access for all.

Thanet Trees has now submitted a number of Freedom of Information requests relating to mowing, biodiversity, funding, management and use of glyphosate weedkiller.

Thanet Trees called for Thanet council to commit to providing a full biodiversity strategy in July last year following a row about cutting back areas at the Winter Gardens site.

A spokesperson added:” We do not believe anything further has been done, and in fact we have still not heard any further details regarding the declared actions of a Climate Emergency declaration. As a local authority TDC have a duty to put conservation of biodiversity at the heart of their policies.”

Thanet Trees has also issued a plea for residents to water newly planted saplings in residential streets and a park which appear to be dying.