The former Primark building in Margate has gone back on the market for £2,750,000.

Planning permission was granted to create mixed retail, offices, a bar and restaurant and flats at the site in 2017.

SIR Investments Ltd, which bought the property in 2015 for £600,000 plus £120,000 VAT, was proposing a two-storey roof extension, internal alterations including new stair wells at upper ground floor and first floor level, change of use of existing first floor and use of new second and third floors as residential, comprising 11 duplexes and apartments.

SIR Investments, whose directors are Eugene Dogot and Boo Khoo, wanted to create 11 flats and maisonettes at the site, retaining the ground floor for commercial, bar and restaurant use. The canopy on the upper ground floor was to be removed.

The property is now marketed with the planning permissions in place through Terence Painter Properties. 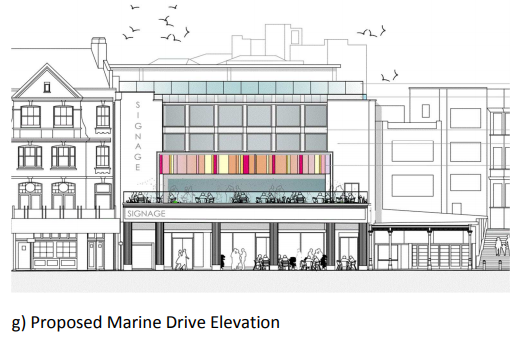 Mr Dogot is also the director for Stour Side Developments which bought the Cliftonville Lido.

Former SIR Investment directors Paul Eley and Alexander Andreev  headed up the buy out of the Lido site, land at All Saints Industrial Estate, land at Eaton Place and the King’s Theatre in Ramsgate, which has since been sold on.

In 2016 the pair claimed to have received interest from a national restaurant chain and ice cream parlour for the former Primark site. Both resigned their roles from SIR  and from Stour Side in 2017.

That same year Stour Side Developments went into administration with former Dreamland administrators Duff & Phelps being brought in after concerns over business irregularities were highlighted.

In 2015 and early 2016, Stour Side received additional cash from Mr Dogot and SIR Investments and in 2017 he became sole director.

After discussions over concerns regarding transactions that were entered into by the company before Mr Dogot was in place it was concluded that the company was unable to pay its debts and was insolvent.

Stour Side Developments is still in administration with the period extended to July 2021. According to a progress report issued in February an investigation into the transactions of the previous directors continues.

SIR is an active company.