All across the isle people are marking the 75th anniversary of VE Day with colourful bunting and garden picnics – albeit from a distance during lockdown.

But one Ramsgate youngster has gone the extra mile by displaying his epic war memorabilia in his front garden.

Harry Keefe has been all over the country visiting fairs adding to an impressive collection which has seen his bedroom transform into a mini museum.

The ten-year-old has been an avid collector since he was just five years old -inspired after a trip to Germany with Grandad, Billy.

Proud dad Mark, 45, said: “Harry’s grandad used to live in Germany and he still goes on trips with him all over Europe.”

The St Ethelbert’s pupil has collected hundreds of items from World War Two ranging from clothing to even parts of a train wreckage from the period.

But his most prized possession is a poster signed by the war hero Lawrence Martin. The 97-year-old served during Operation Market Garden which marked its 75th anniversary last year.

The Allied Forces initiative, which included the Battle for Arnhem, in September 1944, was the largest airborne battle in history. It involved thousands of aircraft and armoured vehicles, and hundreds of thousands of troops and was the only major Allied defeat of the Northwest European campaign.

Mark added: “We bought the poster at Arnhem last September, it’s very special. I spoke to his (Lawrence Martin’s) grandson and he told me never to sell it – but Harry never would.”

Such is Harry’s passion he even wants to open a museum when he’s older so VE Day was the perfect opportunity to showcase his collection.

“We had some bunting left over from the Royal wedding and Harry just wanted to cheer people up during lockdown. We are going to have some music in the street later.” 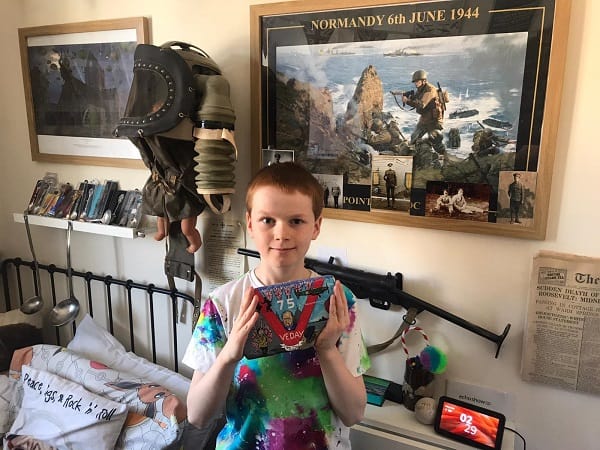 UPDATE: Harry now has a new piece to add to his collection after Ramsgate rock painter Anthony Thorne left a gift outside his home this morning (May 9).