Tragically there have been 13 deaths attributed to coronavirus registered for the Cliftonville West area.

The map has points placed at the centre of the area they represent and does not show the actual location of deaths (such as street name). To protect confidentiality, a small number of deaths have been reallocated between neighbouring areas.

The figures are for deaths occurring between  March 1 and  April 17 and registered by April 18. Figures exclude death of non-residents. Coronavirus (COVID-19) was the underlying cause or was mentioned on the death certificate as a contributory factor.

Thanet ranks as the most deprived local authority in Kent and has some 18 areas that are listed as among the 10% most deprived in the country, including Cliftonville West. The rankings are based on deprivation in areas such as education, employment, health, housing and crime.

However, wards with similar deprivation levels are Margate Central, with no registered deaths, and Newington, with two registered deaths, suggesting the higher rate of deaths in Cliftonville West may be influenced by factors such as the location of care homes. 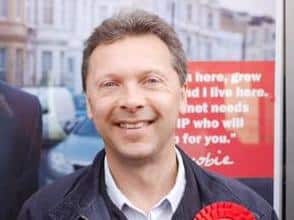 Ward councillor Alan Currie (pictured) said: “It is very sad to see confirmation that COVID- 19 has reached Thanet and residents have died.

“The numbers for Cliftonville West are particularly worrying and tells us that less affluent areas of Thanet with poor housing, overcrowding and ill health could be factors. I would urge all residents to adhere to government advice on social distancing and once the government gets its act together regarding testing we will all be able to manage our daily life in a safer way.”

Iain Bell,Deputy National Statistician at the ONS, said: “Raw statistics are often seen as just numbers. But behind every death, every number, in this pandemic is a human being and a tragic toll on a family and a community.

“It is crucial that ONS, working with public health bodies across government, does all it can to help fully understand the impact coronavirus is having, so the right decisions can be made to help those who most need it.”

As of 5pm on 30 April, of those who tested positive for coronavirus in the UK, 27,510 have died. This new figure includes deaths in all settings, not just in hospitals. The equivalent figure under the old measure of just hospitals would have been 23,229.

There are 3976 people in Kent and Medway who have tested positive for the virus.

East Kent Hospitals, including Margate, Ashford and Canterbury, have registered 175 deaths that are covid related.

During a meeting yesterday (April 30) Wilf Williams, the Accountable Officer for Kent and Medway Clinical Commissioning Group, said: “Activity has come down and our system is still very much able to cope.”