Long term Margate resident Leslie Robert Logan – best known as Les – passed away peacefully aged 98 on March 18 after a stroke from which he did not recover.

Les was born on May 6, 1921, in Chatham, the youngest of six siblings. After school he worked in manufacturing Hurricanes and Spitfires for the war effort. At the outbreak of war he volunteered for the Royal Navy as a gunner. He was transferred to the Fleet Air Arm and served in Yeovil and Scotland.

He met and married his wife Gladys and they had two children and  65 years of happy marriage prior to her death in 2011.

After the war Les completed his apprenticeship as a cabinet maker and eventually ended up working for Margate Estates (Dreamland owner).

He was well known around the town and was always ready to help anyone. In his work he put his hand to many roles from building the animated animal models, magic castle and other attractions in the Magic Gardens and Lido, he helped rebuild the Scenic Railway after two fires over the years and maintained the lights on the side of Dreamland tower when no one else would venture up there. He always had stories about Margate and Dreamland to tell residents and visitors alike.

Les was teetotal and never smoked but did not judge those who did. After retirement he continued with making large wooden children’s toys for his grandchildren and friends and was still climbing ladders to prune his fruit trees at 95 until he had a fall on the ice and broke his hip. 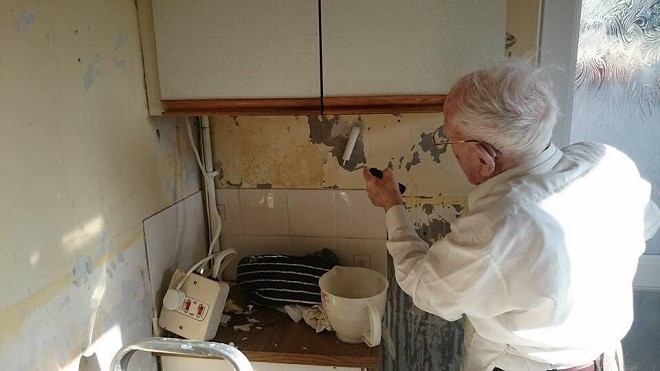 Gone to join his wife Gladys, Les is survived by his sons Colin and Kevin and their wives, his grandchildren and great-grandchildren.

A long and fulfilled life:  A true gentleman in every sense of the word.

The family thank all at Kent House Broadstairs for the care and attention they showed him in his time with them following his fall, and the friends who visited him often.