Young competitors from Thanet won a slew of matches at the annual show hosted by the Pavilion in Broadstairs last week.

The event was supported by Keel Toys, John McCormack of Skip2Bfit and Les Ray of DDS and Thanet Waste.

Ramsgate Boxing Club came away with five out of six wins and PEJ ABC Margate with four out of four wins for boxers Stanley Pitcher, Danny Maslak, Billy Lee and Bailey Giles.

Results for Ramsgate Boxing Club were:

Of these Theo Harket was first to box and started the winning momentum by beating a skilful Essex opponent with an excellent display of long range boxing.

Sam Hurst was having his third bout for Ramsgate and produced his best performance yet, by beating a very strong Surrey opponent in a close bout.

Hayden Gaffon gave a polished performance working behind the left jab and working at long range to beat his Winchester opponent on a clear points decision.

Jack Bushell was having his first bout, he maintained an excellent work rate throughout the contest against a tall Strood opponent, winning on a unanimous decision.

Ayden Brewster was also having his first ever bout and lost on a very close points decision, to a much more experienced opponent. The Ramsgate boxer pushed the Aylesham opponent all the way landing excellent body shots in the second and third rounds.

Last to box was Ramsgate senior boxer, heavyweight Don Homan, also entering the ring for the first time. The Ramsgate boxer stopped his very strong Strood opponent with a straight one two, that sent his opponent crashing to the canvas, giving a win by a first round stoppage. 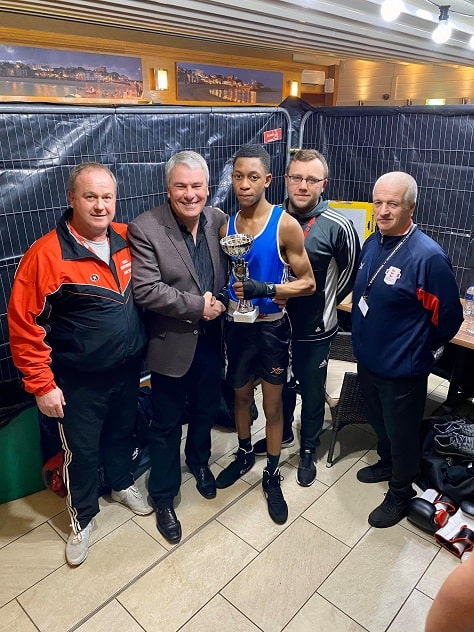 The show has returned to the Pavilion following the end of the Rotary Club of Thanet backed events at the Winter Gardens. Those ended last year but over the past 14 years the events raised £440,000 for local charities as well as contributing towards the expansion of Ramsgate Boxing Club.

Ramsgate Boxing Club president Les Ray said: “I have been president of the club for 40 years. I used to box in school and this was just carrying on from there. The club was going to close 25 years ago but we put some money in the kitty and there has been a lot of good supporters such as Blaze Neon, and the club has gone onwards and upwards.”

The next boxing show is being organised to take place at the Pavilion in October.