Thanet council is calling on residents to help catch culprits who fail to clear up after their dogs.

The authority said although the majority of dog owners are responsible there are a minority who let their pets foul without bothering to clean up.

A social media statement from TDC states: “Here’s one example of what we’re up against…in Cliftonville, Margate an alleyway between Brockley and Clifton Roads is being found covered in disgusting dog mess, and all evidence points to one owner not scooping the poop. 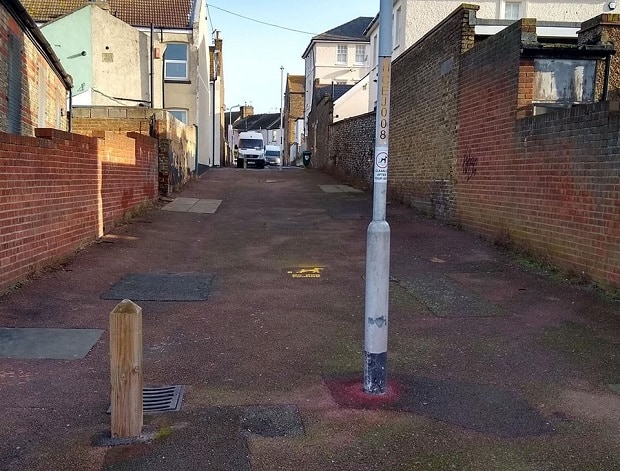 “Our teams have had the alley cleaned, patrolled it regularly and picked up dog mess. They have also added signs and sprayed the pavement with stencils to remind people of their responsibility, as well as adding a dog bin at the top of the alley. Despite these efforts the dog mess still appears.

“Without 24/7 monitoring, it would need luck to catch the culprit, who must be caught in the act of walking away and not picking up the mess, for us to be able to issue a penalty! In the eyes of the law, dog fouling doesn’t allow covert surveillance, so hidden cameras aren’t an option.

“We need people in local communities to start identifying the few who are ruining the streets for the rest of us. Can you help? Residents can report offenders in confidence to sse@thanet.gov.uk, and the joint enforcement team will investigate and take action. We will also be posting flyers through doors in hotspot areas.”

The enforcement team also recently cleared the alley next to Salmestone primary and nursery and stencilled a sign on the footway to remind dog owners to be responsible.

The action followed a report by The Isle of Thanet News last week about the growing problem of discarded dog waste along the public footpath.

The path runs from Tivoli Road to Salmestone Road, alongside the former Margate Sands Railway line. Dog mess littered the ground and black bags containing the waste were discarded alongside the pathway or thrown over the fence. At the bottom of the path by Tivoli Road a mound of bags was building up on a section of brickwork.

Anyone who fails to clear up after their dog can be issued with a Fixed Penalty Notice of £100. If a case goes to court this could cost the owner or person in charge of the animal up to £1,000.

Thanet District Council has worked in partnership with Tikspac to install 30 dog waste bag dispensers around parks and open spaces.