Margate -famed for its sandy beaches, the revival of Dreamland, Turner Contemporary and the annual Meltdown. The town is once more becoming a hive of activity, and with the re-opening of Margate Caves last year, the importance and value of tourism to the town cannot be overestimated.

But Margate also has another jewel in its crown, the iconic harbour arm (Stone Pier). As a young resident of Margate and photographer, to me the harbour arm has a special appeal and magic all of its own. I have photographed it numerous times, and one of my favourite captures in my early days of photography was a glorious sunset over the harbour arm itself. 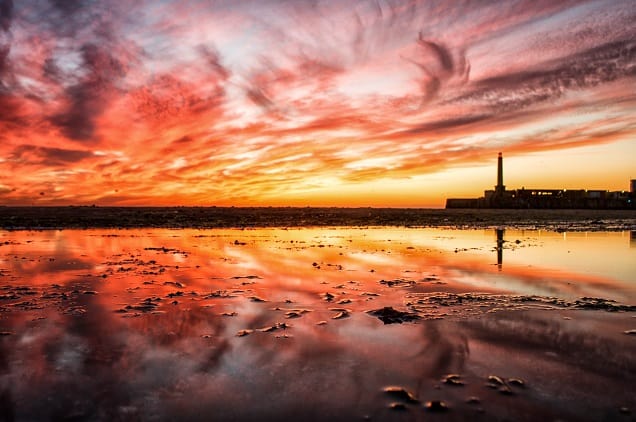 No matter how many times I photograph it I find myself drawn closer to it. Without a doubt artist  JWM Turner was also drawn to Margate, having attended school in Love Lane at an early age he became smitten by the town. In later years he returned to Margate to sketch and was noted for his affair with his landlady Mrs Booth. Turner Contemporary gallery today stands upon her former home.

What is it that makes the harbour arm so appealing to people today? Isle resident and artist Anthony Giles says: “For me the harbour arm at Margate is the epitome of the town. Painted by Turner and numerous other artists over the last, almost 200 years, it offers so much to paint.

“The skies above Thanet are the best in all of Europe so not surprisingly it constantly offers a new challenge to the current stable of Margate artists.”

I am really interested in the local history of Margate and I therefore did some digging with the help of my dad and brother as to the harbour arm itself.

In 1812 Droit House was built for Margate Pier and Harbour Co, and in 1813 work commenced on building the harbour Arm itself  by John Rennie, and took three years to complete. But where did the stone come?

The answer to this question lays across the water at Reculver Towers, the former church of Saint Mary, and prior to that, once a Roman Fort.

In the autumn of 1807, a northerly storm combined with a high tide caused erosion of the cliff on which the church stood to within the churchyard. At a vestry meeting on January 12, 1808, and at the instigation of the vicar Christopher Naylor, it was decided the church should be demolished.

Christopher Naylor applied to the Archbishop of Canterbury, Charles Manners-Sutton, for permission. The Archbishop commissioned neighbouring clergy and landowners to assess the situation and they reported in March 1809 that the church should be demolished and “to save the materials for the erection of another church.”.

In 1810 Trinity House bought what was left of the structure from the parish for £100, to ensure that the towers were preserved as a navigational aid.

Two thousand tons of stone from the demolished church were sold and incorporated into the harbour wall at Margate, known as the Stone Pier, which was completed in 1815. Serious problems were encountered during the construction of the Stone Pier due to the freshwater springs that bubble up in the area, relics of the creek and Tivoli Brooks.

These springs undermined a 100 yard stretch of the wall and the problem was overcome by spreading a bed of clay over the affected area and then laying a timber floor on it, after which the stone walls were built up on top. The harbour wall itself is constructed as a series of compartments filled with rubble and shingle and has now firmly withstood the fury of the sea for 204 years.

The Great Storm of 1953 played havoc on the evening of January 31 and the early hours of February 1. The corner stones were damaged, and the lighthouse fell into the sea, totally destroying it. A new one was built, which stands today. The lighthouse is under the care of the Ramsgate harbour master, to ensure the red light remains alight to warn shipping.

The harbour arm itself, until late last year, was illuminated along the edge with lights, 26 roughly, which changed colour automatically, giving a calm and relaxing atmosphere. Since 2015 the number of lights actually working has declined year by year. In April 2019 there were only three working lights and by July all were extinguished. Calls to Thanet council and communications to our local MPs failed to get a response and sadly at night, the harbour arm looks nothing more than a black silhouette.

The upper deck of the arm, where a small steam railway used to run in the 1950s, now has railings alongside, fitted with LED lighting. I have never seen the lighting work since I moved back here from Devon in 2014. 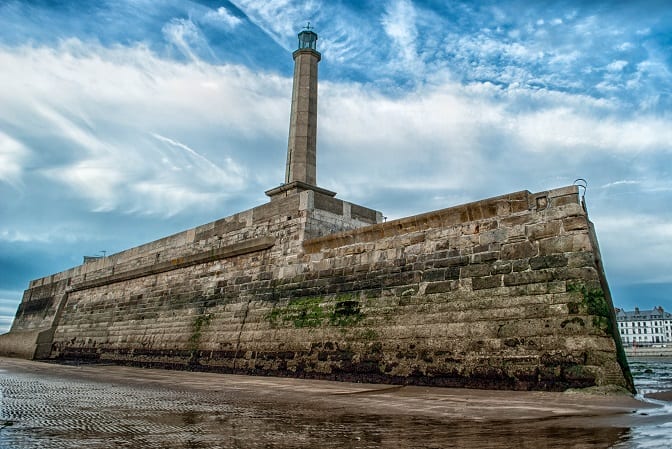 Sitting on the sea defences at night in the summer, watching the sun set on the horizon always draws a crowd (the defences are also fitted with sunken LED lighting but unfortunately those do not work either), and I have seen some spectacular sights on the  horizon, as well as proposals of marriage and just happy familes enjoying a day out.

Long may the harbour arm give enjoyment to all, with its galleries and bars, and long may it remain an icon of Thanet – “The Beautiful Isle”.