Three young people from the Thanet district have been recognised in the annual Spirit of Try Angle Awards, organised by Kent County Council – for positive intervention and personal development.

Following the final judging of the inspirational stories of the district category winners, the 24 Spirit finalists along with guests and sponsors celebrated the 25th anniversary of The Spirit of Try Angle County Final at the Ashford International Hotel.

Joe Dale and Lewis Roberts were finalists in the positive intervention category after being nominated by Police Community Support Officer Deborah Forsyth for helping save the life of a woman who fell from a cliff.

A quiet day of fishing at the coast in Ramsgate – catching up on gossip and life in general, more chatting than catching fish it seemed – turned into a very different day for Joe and Lewis.

The PCSO have described them as brave and thoughtful on a day they will never forget. Both were recognised for their positive intervention and quick thinking.

Rebecca East has attended the Foreland Fields school in Ramsgate which caters for pupils with profound, severe and complex needs from a very young age.

Rebecca is a naturally caring young person and wanted to be more involved in school activities so asked if she could gain some work experience. She offered to assist with a club night and staff stood back and let Rebecca take control.

Rebecca put hard work into preparing lesson plans, informed staff of the roles she wanted them to play, researched information, and identified poems and songs that she could use at the club. She even provided homework for the students.

She also organised paperwork for parents to sign and stood up in front of the parents to introduce herself and inform them of what she was doing. This was done with

Rebecca has now successfully embarked on a music and drama course in a mainstream college. 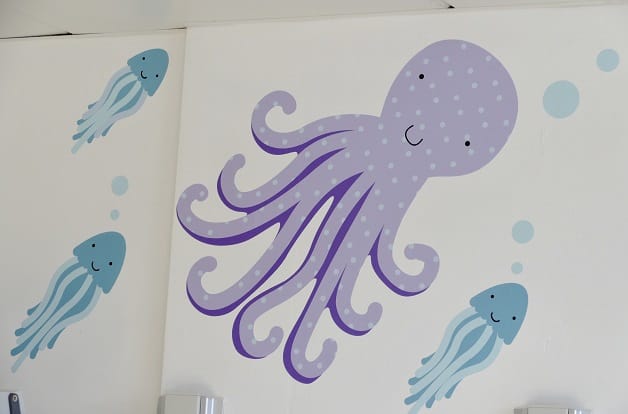 The Special Care Baby Unit at the QEQM Hospital has recently benefited by the Hospital’s League of Friends funding the purchase of: 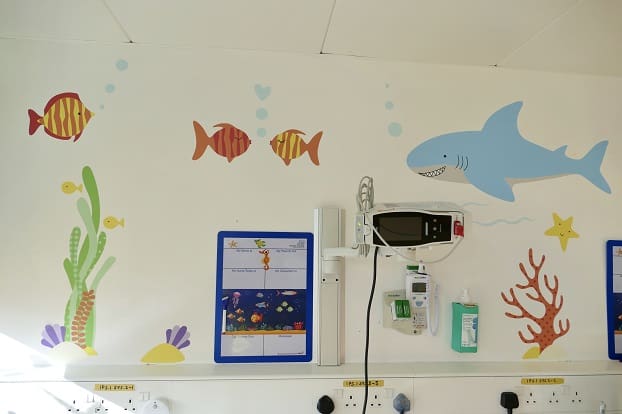 Also, at a recent League of Friends Committee meeting it was agreed to fund:

The total cost of these items comes to £58,460 and the League of Friends would like to thank the public on whom they depend to support their fundraising to enable them to support our local Hospital. More information about their charity is available on their Facebook page – QEQM Hospital League of Friends – and website www.leagueoffriendsqeqm.nhs.uk

RNLI community presenter and Ramsgate lifeboat archivist John Ray visited King Edward Court, Herne Bay on  February 14 where he was presented with a cheque for £1,200. The money had been raised during the past year by the King Edward Court Residents Association

The residents had chosen the RNLI as ‘their’ 2019 charity and John had visited them at the request of Residents Association Chair Ian Devereux to talk about the charity’s work. Throughout the ensuing months the King Edward Court’s residents and staff had worked hard organising a number of fundraising events. This culminated in John being presented with a very generous cheque by King Edward Court supporter Thanet North MP Sir Roger Gale. John, on behalf of the RNLI, expressed his gratitude to all concerned. 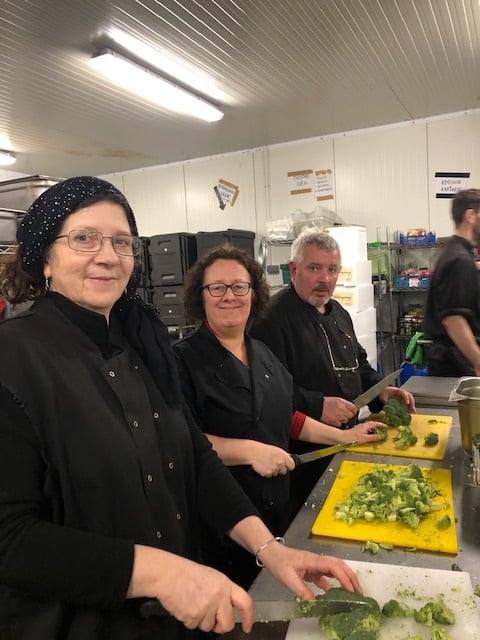 Earlier this week we were privileged due to the kindness and generosity of friends and Thanet residents to be able to take part in another Calais run to alleviate the dire conditions 35 Kurdish families had found themselves in. These families fleeing the appalling circumstances in their home country had been left with nothing and required clothes, toiletries etc. for both themselves and their children. It is affirming to see young people from throughout Europe helping with these projects which have strong Thanet connections due to the number of local volunteers who make the trip to help.

After dropping of the clothes we decided we would make ourselves useful by assisting in the kitchens with the preparation of the food for the meals that are produced daily for refugees in Dunkirk and Calais. Additionally on the day we were there, a further 800 meals were prepared for Brussels where refugees are sleeping in the Central Park. 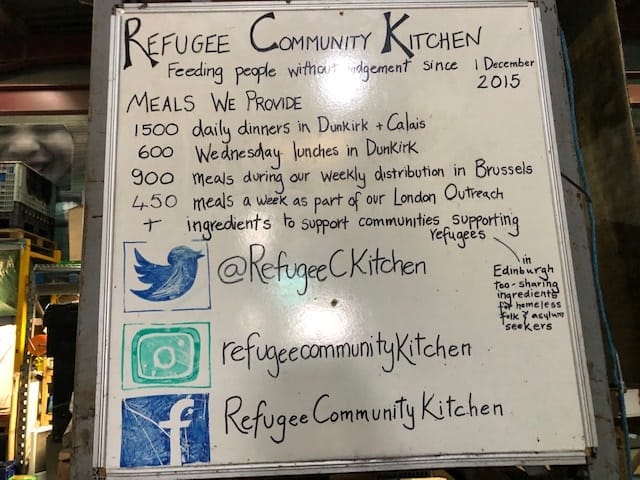 We spent a happy afternoon chopping broccoli with other volunteers. I shared my table with a fabulous young woman called Hannah who had taken a week off her job as an Occupational Therapist to work with the kitchen project. We then visited a group of young men who were in a small encampment in some woodlands taking water, chocolate and fruit.

I would once again like to thank everyone who gave us money, clothes and toiletries and we will be repeating this trip soon, as the need is there. The refugee kitchen has a presence on Facebook, Twitter and Whattsapp so you can follow activities and donate, please do as £1 buys 2 much needed meals! 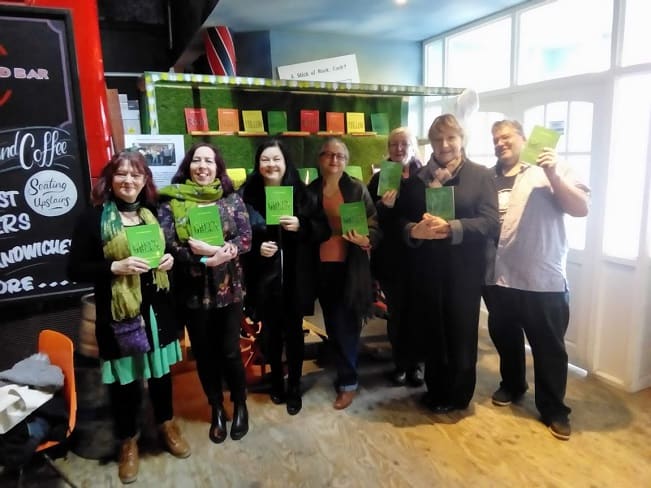 On Saturday, February 15, the very successful local writing group Inspirations, held its fourth book launch at Old Kent Market, Margate. This event, held in this exciting and friendly establishment, was well attended by group members and the general public.

Following the theme of its earlier Anthologies, Green enables writers to create in whatever genre they desire. Each piece, like the Red, Orange and Yellow before it, must incorporate the colour of the theme, be it as a colour or a single item one associates with that colour. From the light and shadow of dappled sunlight through the leaves of a forest canopy, to the wavering green lines of the Aurora Borealis this Anthology has something for everyone.

Why not consider joining this proactive and friendly group? Your work could be in print in our next Anthology, Blue. We meet every fourth Saturday from 10am to 12.30pm at Westgate Library. Contact us for more information, or book copies, through our website https://inspirationswritersgroup.weebly.com/ 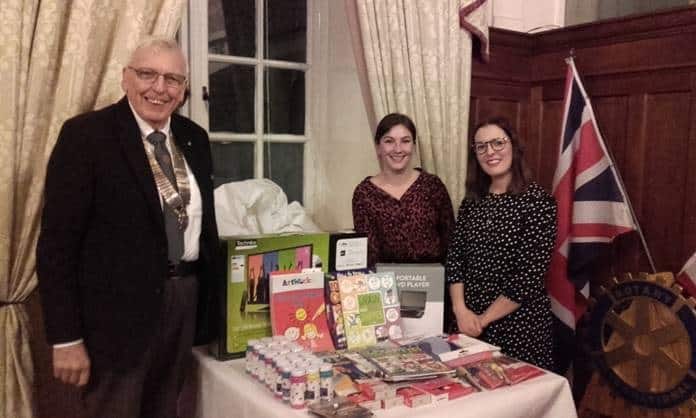 Just before Christmas, President Richard O’Sullivan and the Rotary Santa made their annual visit to the Rainbow Ward at QEQM Hospital to give out sweets and Christmas greetings to the children.

The “Play Team” in Rainbow Ward impressed us greatly and we invited them to come along to a Rotary Club meeting so that we could make a donation towards their equipment stock.

Rather than giving a cash donation, the “Play Team” – Lauren Clayson and Holly Lowery, asked if they could give us a wish list of items they would like to add to their collection of toys and equipment. Accordingly, President Richard and Rotarian Mick Stokes went shopping and bought an array of items ranging from a 24” TV/DVD Combo and loads of art materials to a large number of bottles of bubble-making liquid. (Bubbles are apparently a favourite way of distracting the children when they have to have an injection or blood test!).

After a very interesting and informative talk by Lauren and Holly, there were many questions from Rotary members and their guests before President Richard unveiled a table full of the gifts which he presented to the “Play Team”.

The club also held a formal Burns Night dinner  in the Chapel venue at St Augustine’s Westgate-on-Sea in  January. Seventy-five guests witnessed the ceremonies of homage to the Haggis to the accompaniment of the bagpipes played by a piper from the Caledonian Society. Animated readings from the works of Robbie Burns and a history of his colourful life were followed by a rendition of the song “My Love is like a red, red rose” sung by Rotary Vice-President Chris Hedges

The event was one of a wide range of different events held by the Rotary Club, many of which are designed to raise funds for local, national and international charities.

The Rotary Club meets for an informal supper each Tuesday at St Augustine’s Westgate-on-Sea when we often have an interesting speaker. We welcome guests to our meetings and anyone interested in coming along to see what we do should contact Dave Alker on 01843 845783. There is masses of information about our activities on our website: www.wb-rotary.co.uk

The February meeting was chaired by  Margaret Price who welcomed everyone.

Attendance was good. After the minutes from the January meeting were read, signed and approved the meeting continued with Mrs Price telling the Guild that an outing was being arranged by the Federation for Guilds from East Kent. This will be a coach trip to Kew Gardens and an afternoon tea. This will be in June. Before that in March the annual craft day in Canterbury will include a light lunch and craft making.

After many years Enid Colbear is stepping down from the committee. Mrs Price thanked her for all her hard work supporting the Guild and presented her with flowers. The Guild now looks forward to a year of events and interesting speakers.

The flowers for the afternoons top table were by  Jan Smith for the large arrangement and Joyce Covus for the small arrangement.

After the tea break Doctor Gehad gave an interesting and thought provoking talk about ‘Mercy Ships’ These ships operate on the African coast all year round, providing necessary medical aid to local African people. Many of whom travel long distances to get medical help.

Our next meeting will be on March 2 at 2.30pm. in St. Benedict’s Church Hall Hereson Road Ramsgate. We welcome new members to come and join us. 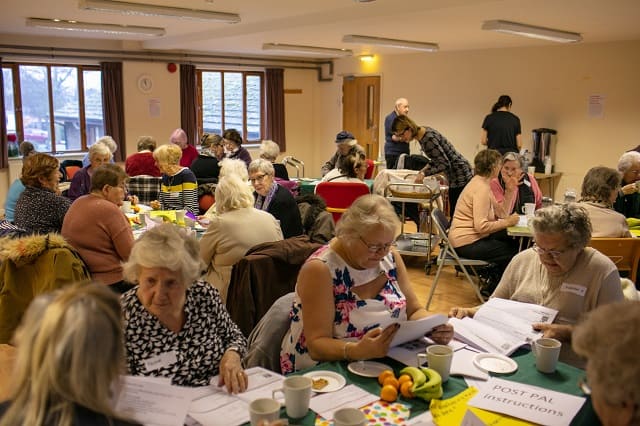 “Volunteering is good for your health” is the message from Kent Coast Volunteering (KCV), which is holding a free workshop for charities and community groups to promote age-friendly and inclusive volunteering.

The session on Tuesday, March 3 includes networking and lunch and is an opportunity for organisations to share what works to recruit age 50-plus volunteers and will discuss the benefits of people in later life to the charity sector – and to its funders.

Project co-coordinator Georgie Macfarlan said: “Older people are a valuable asset for charities – but how can you attract and retain them? We don’t want to miss out on the talents people bring.”

The training follows a year-long project, which invited older people who access KCV services for help, to try volunteering to meet other people, make use of their strengths and take part in activities to help the community during weekly social get togethers.

Co-coordinator and event organiser, Emma Cooney, said: “The aim of the social sessions was to break down barriers to volunteering and boost happiness through quick, easy, fun activities to help others and connect with the wider community, which improves people’s health and wellbeing. People said really nice things like ‘it made my day.’” 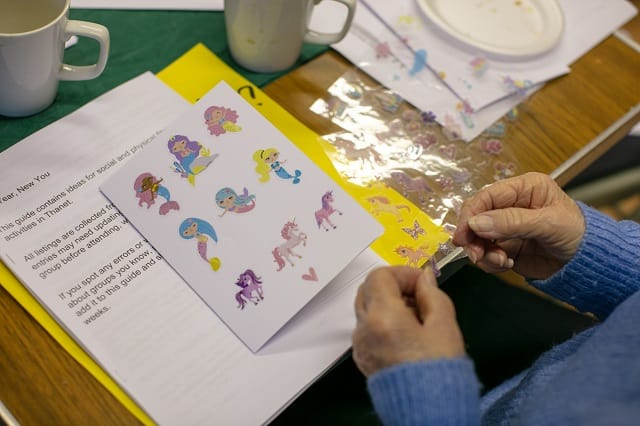 This project is part of a bigger ‘supported to supporter’ programme, which is about encouraging people who have been helped by volunteering organisations to become volunteers themselves. The project is funded by a £50,000 grant from the Centre for Ageing Better and Department of Digital, Culture, Media & Sport, as part of their Age-friendly and inclusive volunteering fund.

Staff at Kent Community Health NHS Foundation Trust (KCHFT) say it is one of the best performing community trusts in the country when it comes to support from immediate managers and team working.

The statistics are revealed in the national analysis of the annual staff survey of NHS across the country. The trust, which was rated as outstanding by the Care Quality Commission in July last year, is benchmarked against 15 other community trusts in England.

Overall, in eight of the 11 themes that make up the NHS staff survey, KCHFT is among the best performing in England and in two areas – immediate managers and team working – the trust is ranked as the best.

Chief Executive Paul Bentley said: “I am enormously proud that all the work that we have done as a trust during the past five years is starting to come to fruition.

“Every step takes us a little bit further along the path towards delivering consistently high-quality healthcare for the people we serve and being the best employer. This marks another important milestone in our journey to do that.’’

You can read the full set of results for KCHFT here