Council tax hikes for policing in Kent will generate an extra £8.4million to boost officer numbers.

The increases will come after Kent police and crime commissioner Matthew Scott’s funding proposal for the next financial year was unanimously approved by councillors at Maidstone County Hall yesterday (February 6).

Under his plans, the amount the average Band D household in Kent will have to pay towards the police precept will grow from £193.15 to £203.15, marking a 5.2% rise from April last year.

The multi-million pound monetary boost will fund 36 new PSCOs, including 15 dedicated to crime prevention. There will also be an uplift of 100 civilian staff to support front-line officers, notably more community liaison officers.

Mr Scott told the Kent Police and Crime Panel: “If you ask residents to pay more, they should get more in return for that. 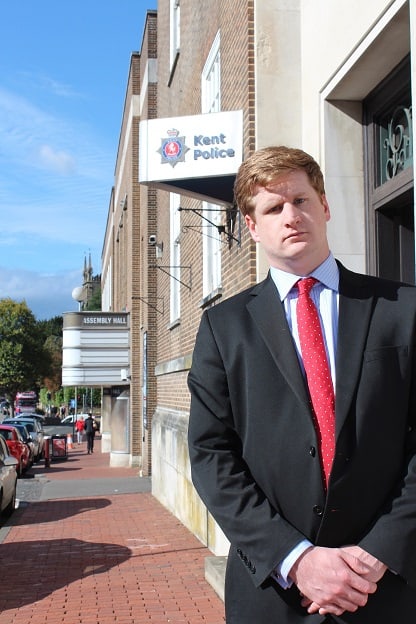 “My plan provides a balance to meeting the needs of policing in 2020 and the growing expectation that residents have for the services they receive.”

His comments were made in front of more than a dozen district and county councillors, along with senior representatives from Mr Scott’s office, in the main council chamber of the Sessions House building.

The panel was told the police precept increases will help meet inflationary pressures, such as vehicle running costs, as well as annual pay rises for staff.

However, Kent Police will be expected to make cuts of more than £9m despite pledges of extra funding from Boris Johnson’s administration.

Mr Scott said the force would be avoiding front line counter closures, adding: “We are trying to find savings, but police are having to be much, much smarter.”

A total of 147 of these would be recruited as part of the first-year share of the Government’s planned 20,000 new officers, which was promised by the Conservatives in December’s General Election campaign.

The remaining 34 police officers would be funded through this year’s council tax rise, the commissioner’s report published to the panel revealed last week.

Dover council’s deputy leader Michael Holloway (Con) asked Mr Scott: “Are we getting the justifiable slice of cake from central Government? Given the strategic location of Kent sandwiched between London and Europe.”

In response, the commissioner said: “We are getting more funding, but the formula is still not fair.”