The annual Channel Dash memorial service marking one of the most daring actions in the history of naval aviation will take place on February 12 at the 825 Memorial at  Ramsgate harbour.

Admiral of the Fleet Lord Boyce, together with Thanet mayors, representatives of the armed forces, Royal British Legion, veterans and contingents from cadet forces will be in attendance with their standards.

This year the Ramsgate service, which starts at 11am, will include a handover of artefacts from the family of one of the pilots who perished during the wartime Operation Fuller – known as the Channel Dash.

During the operation 18 naval aviators from the Fleet Air Arm (825 Naval Air Squadron) flew six fabric-covered Fairey Swordfish bi-planes from RAF Manston in an attack on the might of the German Battle Fleet in the Straits of Dover.

The British top brass thought the German force would only travel through the Straits of Dover at night and had rested the majority of its air crews, leaving just the six Swordfish available to combat the German threat.

As crews were frantically scrambled, the six biplanes flew on, determined to attack the battleships Scharnhorst and Gneisenau which were in turn protected by 6 destroyers, 40 flak ships and 200 fighter aircraft. Crippled and ablaze before they had even got within range of their targets, the heroic British naval aviators delivered their attacks and paid the ultimate sacrifice with only five of the aircrew being rescued and all of their aircraft destroyed.

Sub Lieutenant Peter Bligh was one of the six brave Royal Navy pilots that ‘Dashed’ up the Channel on February 12, 1942.

Peter was with the squadron at RAF Manston on that fateful day and the decision as to which pilot would fly was down to the toss of a coin. Bligh ‘won’.

Peter Bligh was killed in the action and his body was never recovered. He has no grave other than the sea.

The aircraft flew in 2 V formations of three and Bligh was in the second wave where all the crews perished. The only body recovered from this second formation was the telegraphist Air Gunner from Bligh’s aircraft, Leading Airman William Granville-Smith.  Granville–Smith is buried in the Naval Reservation, Woodland Cemetery, Gillingham, close to his Commanding Officer Lieutenant Commander Eugene Esmonde VC DSO.

Following the death of Dr John Bligh, one of Peter Bligh’s younger brothers, the Channel Dash Memorial Trust is to be presented by the family with artefacts relating to Peter. These include a portrait of him in his flying gear, a photograph of him with the Swordfish and his pilot’s wings.

The handover will take place at the annual remembrance service at Ramsgate harbour on February 12.

Malcolm Godfrey, Chairman of the Channel Dash Memorial Trust, said: “We are delighted and very proud to be offered the opportunity to take responsibility for these significant pieces relating to one of the Channel Dash heroes, and we are most grateful to the family of Dr John Bligh for giving us this opportunity.

“As we approach the 80th anniversary of the Channel Dash in 2022 we are preparing to mark this significant occasion with a series of events and the use of artefacts such as these will help to enhance the relating of this significant story of heroism and selfless courage.

“This year’s services will be particularly poignant, not only because of the handover of the artefacts but also we will be remembering the last survivor of the Channel Dash, Sub Lieutenant JFN (Bill) Wedge of HMS Worcester. Bill passed away peacefully in January this year at the age of 98, he was an Honorary Vice President of the Trust and recently recorded his memories of that day in 1942 when he was filmed for an upcoming documentary as part of the 80th anniversary commemorations.”

The Channel Dash Memorial Trust www.channeldash.org is a small independent charity that has raised the funds for and delivered two significant memorials to Operation Fuller. 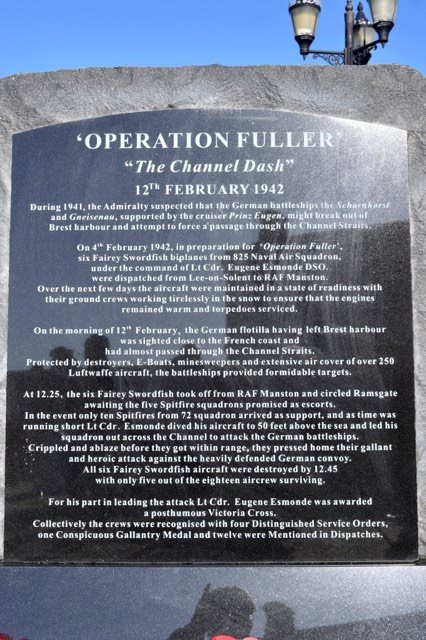 It has also delivered important commemorations to mark the 70th and 75th anniversaries.  The memorial to the crews of 825 Naval Air Squadron is on the harbour at Ramsgate and the memorial to all those from all services that participated in Operation Fuller is on the sea front at Dover.  The Trust holds an annual remembrance service at each of the memorials on February 12 every year.

Planning is underway to hold a major event in February 2022, hopefully at Manston where the planes took off on that day in 1942.

Negotiations have started with Margate company Hornby to produce commemorative items under their Airfix and Corgi brands, as they did for the 70th. Work has started on a documentary, a new commemorative book and possibly a feature film.  The Trust is working closely with the Royal Navy and Navy Wings and the current 825 Naval Air Squadron, to produce a fitting tribute in 2022. Companies interested in sponsoring the event and anybody that would like to support the work of the Trust can contact chairman@channeldash.org