A Thanet Boccia club set up last year has scooped a top award.

Thanet Thunderers, a community club based at Trinity Community Resource Centre in Cliftonville, has been named club of the year at the Boccia England’s Annual General Meeting and Awards ceremony.

The club meets twice a week to play Boccia, a Paralympic sport originally designed for severely disabled players but now enjoyed by all.  It’s a gentle, soft ball game played from a chair or wheelchair. The main rule is that no-one stands up, so everyone, wheelchair user or marathon runner, is equal.

If a player can’t throw a ball, they can kick it, and if they can’t kick, they use a ramp to launch the ball.

The sport  is rapidly growing in numbers of people of all ages and physical and intellectual abilities taking part.

The team has won numerous awards but is equally proud of all members, whether they earn medals or simply like to chat during tea-time.

Following a day refereeing at a national competition on Saturday (December 14) Thanet Thunderers chairman Terry Fearn, attended Boccia England’s Annual General Meeting and awards ceremony, little suspecting that he would be called out by Chief Executive Chris Ratcliffe and presented with the governing body’s coveted trophy on behalf of the club. 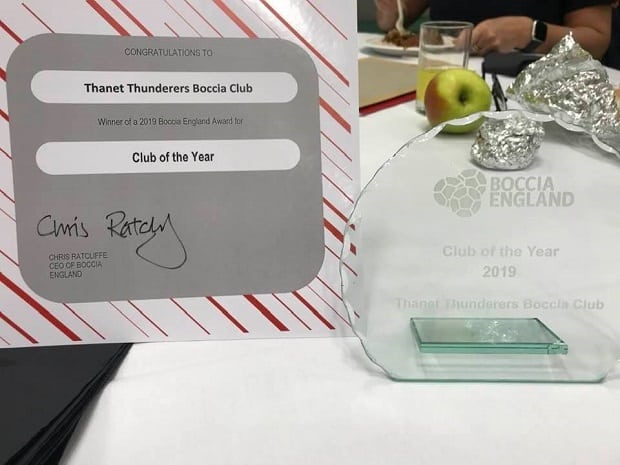 The award recognises the huge effort of Terry’s management team at Thunderers to deliver a quality experience to all of its members. Properly qualified coaches and officials ensure the smooth running of games and help everyone achieve to their best potential, as well as keeping the social side of the club running vigorously. Club members have enjoyed trips to France and Belgium as well as local activities and fund-raisers throughout the year.

Thunderers are a non-profit local organisation set up with a grant from Ageless Thanet. It is largely self-supporting but several local supermarkets have assisted with fundraising, including Sainsbury, Morrisons and Waitrose. The club is also included in Asda Broadstairs’s current in-store charity choice for shoppers.

Terry said: “Please drop your green tokens in our slot at Asda and help us to continue to play a game that alleviates social isolation and promotes fitness and wellbeing to many. Decent funding also increases our ability to reach out to schools, residential homes and clubs in Thanet with demonstrations and game sessions.”

Terry can be contacted on 07505 120059 for more information on Boccia and Thanet Thunderers activities. New members are always welcome, and the first session is always free.

It is suggested that people telephone for a chat and more information before turning up to a session, so there can then be someone on hand to welcome new folk/

Regular sessions start at 2pm every Tuesday and Friday.  The Trinity Resource centre is on the Loop bus route, opposite The Wheatsheaf pub.