The playing records of the two sides, prior to the match were similar with OAs in ninth place in the league having won three more bonus points than Wanderers in tenth.

Thanet welcomed back Arek Janelzko to the second row after a spell at Tunbridge Wells and Jon Walker Smith was on the bench after a long absence through injury. Tom Walton returned from University to replace the injured Lewis Stone at scrum half. Blake Leahy made his first XV debut on the right wing and became the first player from his age group to do so. A returner to rugby, Antony Theodosiou was on the bench for his debut in the first XV.

Conditions were good as Wanderers kicked off down the slope and after a lively opening from both sides OAs clicked into gear to score under the posts and go 7-0 ahead. Thanet came back hard and on ten minutes Walton, Nick Herbert and Charlie Knight combined well to send Jimmy Robinson away down the left wing for a touch down in the corner. Herbert’s conversion attempt from close to the clubhouse into the wind was short. 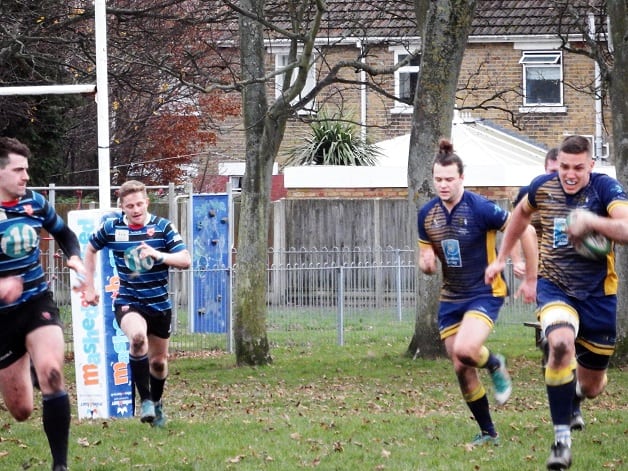 Arek was in quickly to snuff out a visiting attack from the restart but Thanet were soon having to defend to withstand some fierce OAs pressure. On 25 minutes Wanderers conceded a penalty near their line and were slow to respond to a quickly taken one that gave the visitors a 5-12 lead. A no arms tackle by the visiting full back brought him a yellow card and a minute later another expansive move from Wanderers gave Walton the opportunity to cut through OAs defence and make it 10-12.

Back came OAs and a couple of missed tackles led to a try under the posts for a 10-19 lead. Thanet prop forwards Clement and Tolley have played more minutes than the norm in recent weeks and the appearance of Walker-Smith, who now came on to replace Danny Clement, will be welcomed by them. Leahy kicked ahead and caught the catcher to set a good attacking position.

Good pressure at a scrum led to a penalty for Thanet and playing with advantage the ball was spun left and back right before Walton made another excellent finish to leave the half time score at 15-19. 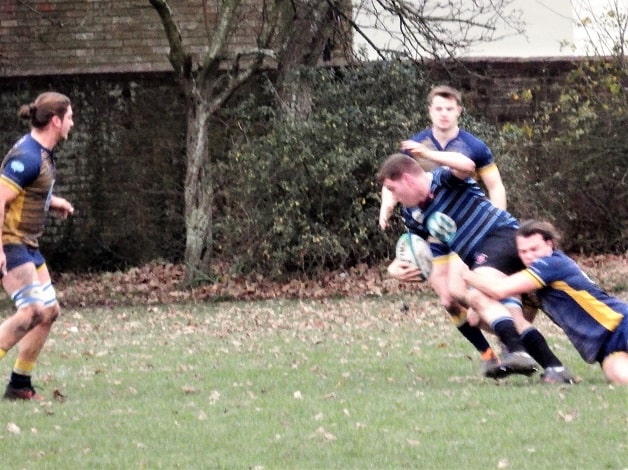 An OAs penalty early in the second half resulted in an unconverted try as the visiting kicker hit the post but the nine point margin was restored. Kris Finneran came on to join George Orton in the second row replacing Arek who had a shoulder injury. The visitors were enjoying most of the possession at this stage and good defence from Wanderers kept their line intact before OAs extended their lead with a drop goal, a rarely used means of keeping the scoreboard moving nowadays.

Cam Pond’s big tackle stemmed one attack and fellow centre Knight made an electric break before as things warmed up, the referee called the captains to issue a warning before awarding Wanderers a penalty. Herbert’s kick took Thanet close and a powerful forward drive from the resultant line-out ended with a try for Walker-Smith on his return to the side. Tom Longdon’s conversion just did enough to creep over the bar and Thanet had a bonus point and were within range at 22-27.

The recent try scorer now took a break and a scrum penalty followed for the opposition at the next scrum. There was no mistake from 25 metres and in front from OAs kicker to stretch the lead to 22-30. Debutant Theodosiou had replaced Leahy and he was soon involved breaking strongly out of defence before shortly afterwards making a good tackle and winning a penalty at the breakdown. With four minutes to play a further penalty to the visitors moved them ahead 22-33. 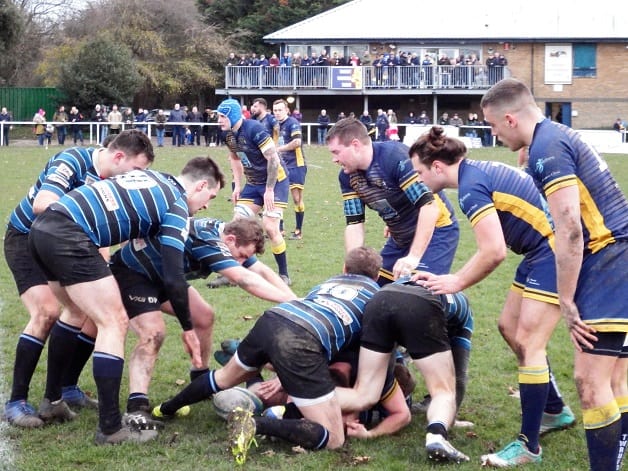 Clement broke through and raced towards the line before being brought down but Wanderers couldn’t get close enough to earn a losing bonus point before the excellent referee Michael Maple signalled full time.

There were many top quality individual performances for Wanderers today but they didn’t add up to a team performance that could deny the visitors their victory. OAs Number ten Josh Winduss used his boot well to continually peg Wanderers back as part of a team display that belied their lowly league position.

A few uncharacteristic defensive errors cost Wanderers dear but the positives augur well for the future as the selection problems stabilise. Neil Wakefield’s return brought precision back to the line out and the back row of Warren Riddell-Broomfield, Brett Scott and Andy Letts battled hard against in form attackers. There were strong performances in the back line from Charlie Knight and Nick Herbert but the man of the match for Wanderers was Tom Walton whose sparkling all round display also brought him two tries.

This weekend completes the first round of league fixtures when the team make the short trip for a local derby at Deal and Betteshanger for the last match before the Christmas break. Kick off is at 2pm against a side who have climbed to 5th in the league.