VUE Thanet has announced that it will be sponsoring Margate FC’s half-time penalty shoot-out competition.

After taking on the spot-kicks at Hartsdown Park’s hallowed turf, the winners of the competition will receive two complimentary tickets to a Vue screening of their choice.

The Garlinge Primary School pupil held her nerve during the break as Margate played Potters Bar. 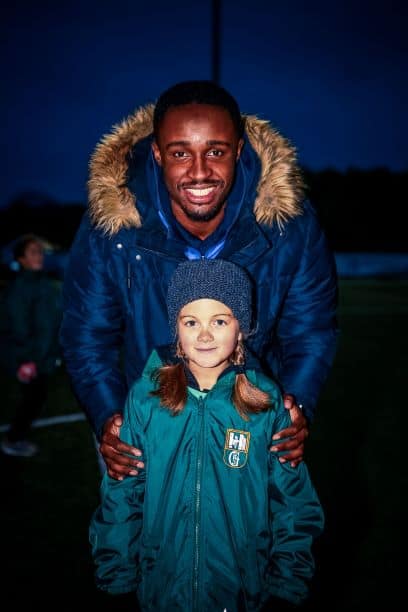 Margate FC’s/Vue’s penalty shoot-out competition provides a fantastic opportunity for Margate FC fans to experience taking a penalty in front of the home crowd and will take place at every home game for the remainder of the season at Hartsdown Park.

Andrew Mullem, General Manager for Vue Thanet, said: “We’re excited to be sponsoring Margate FC’s penalty shoot-out, to give fans the opportunity to win two tickets to enjoy the best in big screen entertainment. There are some fantastic film releases set for the remainder of 2019 and into 2020, and we look forward to welcoming Thanet’s best footballers to enjoy them.”

Deny Wilson, General Manager for Margate FC, added: “We would like to thank Vue Thanet for sponsoring this popular competition for the rest of the season. Half-time shoot outs are the greatest way to get closer to the players and the action on the pitch at Hartsdown Park. Here’s hoping we see some of our competition winners at our trials in a few years down the line.”

Those who want to test their nerves in front of Hartsdown Park’s most loyal still can get involved at every home game. The competition will be open to Under 16s who can sign up for free at the Club’s shop within the stadium before kick-off.

Tickets for Vue Thanet are available to book online.