Businesses in Broadstairs High Street say Christmas trade will be hit by the suspension of three parking bays for almost 12 weeks due to building works.

It is to allow building works at 8-12 High Street, the former site of a café and Henry’s camera shop, which is being developed into a store and flats by Panther Securities PLC.

Permission has been granted by the council for a build on the site of a three-storey property with a shop on the ground floor and three, 2-bed flats and nine one-bed flats.

Stephen Howe, who has run Present Company in the High Street for more than 20 years, says the closure will affect Christmas trade and has contacted councillors to ask why no consultation was carried out. 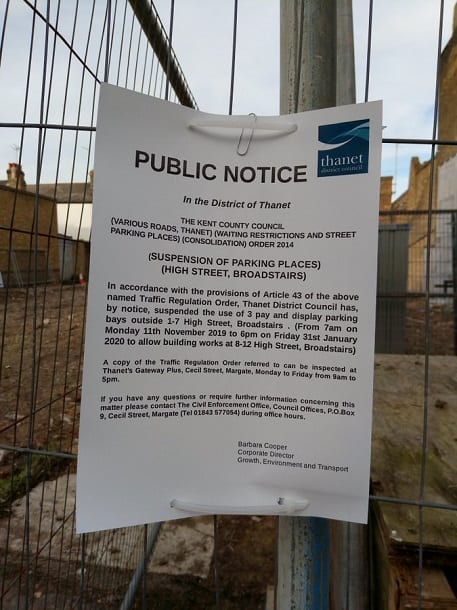 He said: “Businesses were not consulted at all. The council told Londis they had no legal requirement to consult but I would have thought it would be common courtesy. I can’t see how this won’t hit Christmas trade.

“We don’t even know what they need the spaces for. If it is building materials then that will mean handy missiles in the evenings when there are people who are drunk. If it is for lorries are they going to be parked outside all day long?

“Considering the size of the plot where the construction is to take place I would have thought it would be entirely possible to keep everything on the site and as such not interfere with existing traders.

“I am very disappointed that as traders and residents for some 20 years that we were not consulted by the council, especially as basically this covers our peak trading period of the year. Parking is at a premium in the High Street at the best of times and I cannot see any reason to justify the use of these spaces for building works, be it materials, machinery or vans. It simply is not acceptable.”

Stephen says he would like the suspension to be postponed until at least the second week of January 2020.

A Thanet council spokesperson said: “An external application for the suspension of three parking bays outside 1-7 High Street, Broadstairs, was approved following the standard council process, which does not require public consultation. Since the notice to suspend the bays was posted we have only received one formal complaint.

“Broadstairs High Street and the surrounding roads have a large amount of on street parking spaces available – with an additional 350 spaces in the town’s six car parks (including free parking in St Peter’s Road car park on a Saturday). We do not feel that the suspension of three spaces will have a negative impact on the town’s Christmas trading.”