The Thanet Winter Shelter, which will open on Monday (November 11) through to March 29 to provide a bed, food and services to those sleeping rough on the isle, aims to ‘reset’ the lives of its clients.

The scheme, now in its fourth year, is free to anyone who needs to access it and referrals are made by Thanet’s Rough Sleeper Service, RISE.

At least 20 bed spaces, plus five emergency ones, will be provided nightly, as well a hot evening meal and breakfast the next morning. It will run across eight venues in Margate and Ramsgate and is receiving support from the Salvation Army, Thanet council, The Gap Project in Broadstairs and isle churches.

Funding for the project costs around £65,000 each year. Thanet council gives £20,000 with a further £10,000 grant from the Ministry of Housing, Communities and Local Government but the rest is made up of donations.

This year the shelter has a new manager, Danilo Luongo, who already works with RISE and support service Serveco which is also supporting the scheme.

Danilio said: “The first thing is always to provide a place to stay at night as the weather gets colder and then meals but the point of the shelter is contact with RISE and services like Citizen’s Advice, The Beacon mental health centre, Housing Options.

“People’s issues are all very different and each key worker has different skills. Problems might be with addiction so we would do a referral to The Forward Trust, or mental health and we have The Beacon. It might be money managing problems and we would refer to the Landlord Liaison officer or someone might have fallen on hard times because of Universal Credit or housing benefits, We work with people on personal housing plans. Once people are at the shelter we can work to fix things and get them into housing.”

The RISE project, which officially launched on World Homeless Day last year, provides wraparound support for rough sleepers. The team is made up of three outreach workers, a substance misuse and a mental health professional. It also includes dedicated landlord officers who source the right accommodation and then work closely with people to help them retain it.

A total of 163 people have been supported by the RISE team, 69 of which have been housed. 93 people received additional ‘non-housing related’ support that they needed in order  to sustain accommodation. 17 people have been reconnected to areas where they had a local support network. The team is still supporting a further 20 people who have recently been housed, helping them adjust in order to keep their new tenancies.

People needing help are generally in the 25-60 age group. Recent homelessness counts by the RISE team have included three people under 25 and a man aged 72.

Damilo said: “He had split from his wife, had a heart condition and had come back from Australia. It took three days to find a solution with temporary accommodation. Cases like this warm the heart.

“The saddest thing is working with a person who says they want help but at the end of the day they don’t.”

Many of the people on our streets are also dog owners and this can present a problem. Danilo said: “We do not have the insurance cover. But RISE will look for a solution, talking to the liaison officer, kind landlords, temporary accommodation.”

In 2018 Research by Shelter revealed Thanet as in the top ten areas with the highest number of female rough sleepers. Eleven women were recorded as sleeping on the street in Thanet  in 2017.

Danilo says this is a situation that he has seen reduced through his work with RISE and Sereco.

He said: “Sometimes this happens when they have fallen out with a partner. There were three women noticed on a street count a couple of weeks ago, they are all in a safe place now with continued outreach.” 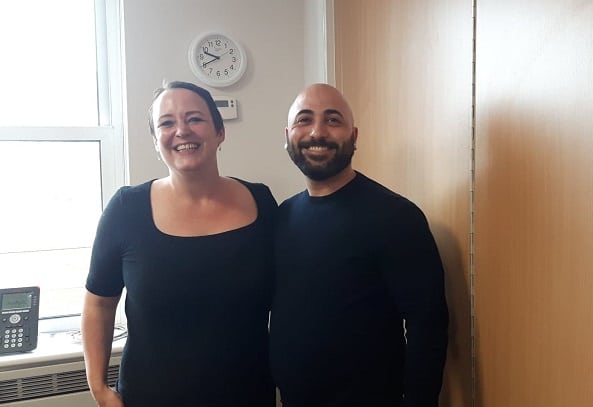 Deputy council leader Helen Whitehead (pictured with Danilo), who is getting ready for her second year as a shelter volunteer, said: “It is vital to provide the foundation for people, a bedrock, and then work on the issues that come up. Emergency support is vital but so is the long term planning by RISE with all the services coming together to make sure issues are resolved. Making sure the wraparound care is there is so important and RISE is doing a brilliant job.

“I was absolutely privileged to be part of the winter shelter last year and have seen what a difference it can make when co-ordinated services come together.

The Winter Shelter is heavily dependent on donations, either monetary, goods or volunteered time.

To volunteer your time to help run the shelter or to offer professional skills such as dentistry, hairdressing, chiropody, please visit thanetwintershelter.org. Full training and ongoing support will be provided

Help with fundraising and donate via the Thanet Winter Shelter gofundme.com/thanet-night-winter-shelter

Buy something specific for the Shelter via the Amazon Wish List at www.amzn.to/2oOeglw

Donations of food or bedding are also gratefully received. Please contact the Salvation Army in Ramsgate.

Storage space is also desperately needed. RISE has a stock of furniture and home goods for when the team move someone into new accommodation but they need to store it.

If  you can help email Danilo@ThanetWinterShelter.org 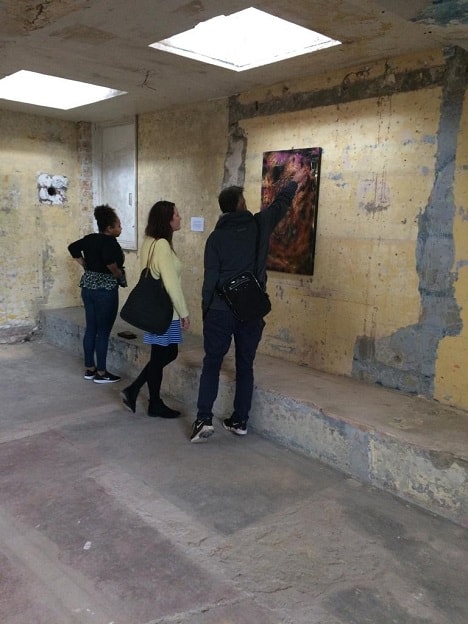 A recent exhibition of former Turner Prize winners and nominees featured some very special artworks. Two paintings by a client of the RISE team were displayed in the Sunshine Cafe, Margate alongside internationally known talents such as Tracey Emin and Damien Hirst.

They were produced especially for the exhibition by Thanet resident Daniel. The show’s location was particularly poignant as this time last year he was living on the beach, under the Sun Deck that is visible opposite the gallery.

He is now thriving at the Somewhere Safe to Stay hub thanks to funding from the MHCLG, Thanet District Council and Pathways delivery. 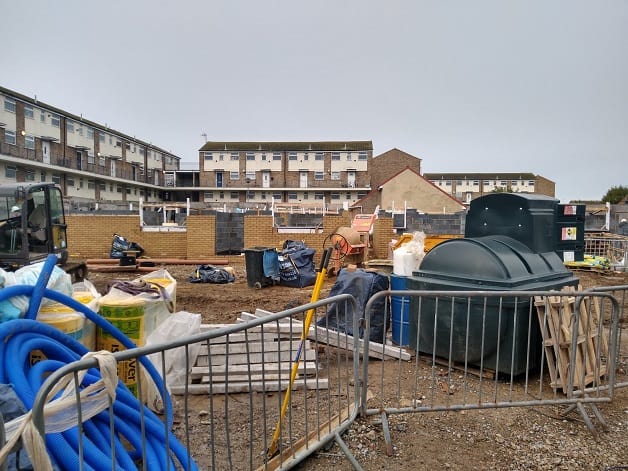 To tackle this the authority has undertaken its own scheme of building or refurbishing 150 homes by 2020 at a cost of £30million.

Some £14million has been spent on housing schemes across Thanet. These projects include a new build programme, Margate Housing Intervention project, Empty Homes Project 2012-15, and King Street intervention.

The council also plans to create its own housing company by April 1, 2020. The company would enable the council to directly buy land and build properties.

It is hoped the project will mean better standard housing, better management and more affordability for residents.

The authority is currently delivering phases 2 and 3 of its affordable homes programme The new homes will be for 51 local families, including those built in the first phase in Margate and St Peter’s. The properties will be available to families who are on the council’s housing list and who have the highest need.

The funding for the projects was  secured as a result of successful bids to the Government’s Homes and Communities Agency (HCA), which were submitted by the council’s housing teams in 2014.

New properties are being built across Thanet on sites that were previously blocks of garages. The current  phase is scheduled to be completed by mid 2020.

New build developments at King Street and Sussex Street in Ramsgate will have solar panel systems installed, and all units will meet energy efficiency standards. Many of the properties have also been future-proofed should tenants with mobility or access issues require adaptations.