The date has been set for two judicial reviews challenging a decision to close acute stroke services in hospitals including Margate’s QEQM in favour of three hyper-acute units for Kent and Medway.

Two groups, Save Our NHS in Thanet and Thanet Stroke Campaign are fighting the decision made by a Joint Committee of Clinical Commissioning Groups’ (JCCCG).

The reviews will be heard in the High Court from December 3-5. The two cases will be heard together by the same judge although they are being brought on behalf of separate claimants.

Save Our NHS in Kent (SONiK) have been fighting against the changes to A&E and Stroke in east Kent since 2017. The group has also raised awareness of issues such as the potential closure of consultant-led maternity at QEQM and Ashford and the privatisation of pathology services in Kent.

Member Rebecca Gordon Nesbitt said: “I attended the meeting in Maidstone when the plans were first made plain to the public. It was clear from the outset that the proposal was full of holes and left Thanet with very poor provision compared to other areas. The process by which decisions were made was obviously biased.

“Myself and members of SONiK argued that Thanet patients must not be expected to accept such a lengthy journey by ambulance to Ashford. We have been fighting ever since, and we hope to win in court in December”.

Jon Flaig, chair of SONiK, added “Our case argues that the processes used to come to a decision about the siting of HASUs was flawed and that the decision was made beforehand, which is not lawful.

“We argue that three HASUs for all of Kent is too few. There must be at least four, and one of them must be sited in Thanet, due to the poor road network surrounding the isle and due to the deprivation in the area that makes residents more likely to suffer a stroke. The population is rising across Kent – we need more services, not less.”

Carly Jeffrey of SONiK said “If you support this cause, please try to get the day off work on Tuesday, December 3 to join us at the Royal Courts of Justice. Lots of support in the public gallery will demonstrate how much local people care. If you’d like to come but are worried about expense or have mobility issues, please contact SONiK at saveournhskent@gmail.com – we will try to make arrangements so that anyone who wants to can attend.”

Thanet resident Marion Kepple is the claimant for the Thanet Stroke Campaign. She and her team Cllr Karen Constantine, and Sharon Goodyer, who runs the Summer Kitchen, have worked hard to get to this point in what has been a lengthy and complicated process. The community helped back Marion’s claim by funding her case, raising £5,000 after Cllr Constantine set up a crowd funder.

Alex Rook, the lawyer from Irwin Mictchell who took the case on, said: “ “Marion was one of a number of local people left devastated following the decision to close the acute stroke unit at Queen Elizabeth the Queen Mother Hospital.

“She and her fellow campaigners expressed genuine concerns that the decision to close the unit had been reached unlawfully and unfairly, without a thorough consultation considering the views of the local residents.  She is therefore very pleased that the court has recognised the complexity and importance of the matter and listed it for a 3 day hearing starting on 3 December.  It is likely that the Judge will want some time after the hearing to prepare a written judgment, but all parties are in agreement that the matter is urgent and needs to be resolved as soon as possible.”

Cllr Constantine says the case challenges the important principle and meaning of consultation and if successful could set an important precedent in Thanet,

She said: “I challenged the lack of consultation over the removal of the Stroke unit at the HOSC, Health Overview and Scrutiny Committee, I lobbied the councillors who represent areas outside Thanet to fully understand our plight and the unfair and potentially life threatening disadvantage this would cause.

“The people of Thanet, who are the most disadvantaged and suffer the worst health outcomes have not been properly consulted and have certainly not been listened too. If the Judge rules in our favour it will have far reaching implications for our community and will shape the future of consultations here and elsewhere. People must have a genuine voice. I hope the judge can see the risk posed to Thanet residents by inadequate consultation. Ashford is too far.” 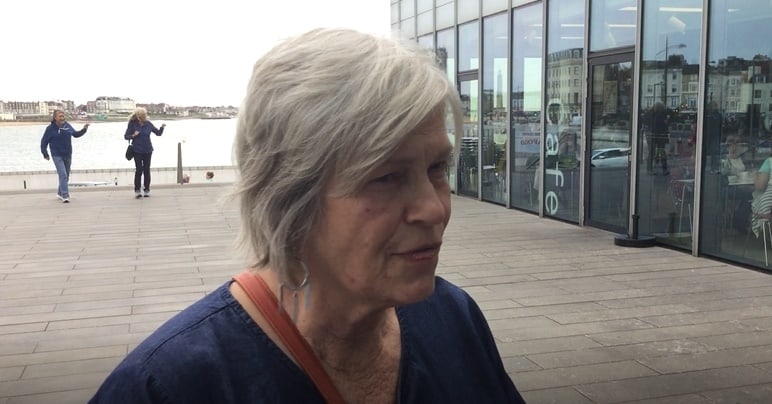 Sharon Goodyer, added  “Marion is bravely blazing a trail for us all. What we’d now like to see is as many people as possible turning up to support her at the Royal Court on December 3rd. We have the banners and posters we need the people!”

Marion said: “This decision was completely unfair. We were told that we could have our say, but the opportunity to keep a stroke unit at QEQM wasn’t even an option!  I refuse to allow the JCCCG (Joint Clinical Commissioning  Group) to treat me and the residents of Thanet in this way.”

A statement from the review team says: “We believe we carried out a legal, rational, fair and lawful process. The decision to establish three hyper acute stroke units in Kent and Medway is supported by local, regional and national specialists, including the four hospital trusts  and the senior stroke consultants in Kent and Medway. However, we will of course comply with any finding of the court.”