Outraged patients at Mocketts Wood surgery in St Peter’s have raised a petition to protest at the Care Quality Commission decision to put the centre in special measures.

In just hours more than 230 people have signed to ask the CQC to take the practice out of special measures and provide them with a process partnering from another practice which follows the required standards for risk registers and recruitment processes.

The CQC took the action after rating the surgery as inadequate following inspections in July and August.

The measures mean the surgery in Hopeville Avenue could be shut down if it does not make adequate improvements in the next six months.

In the report published this week the surgery was rated inadequate in three areas – safety, effectiveness and leadership – as requires improvement for being responsive and rated good for caring services.

The inspectors found a number of breaches including practice staff who had contact with the public had not been appropriately immunised to keep them safe; appropriate checks on staff prior to appointing them were not carried out; the practice had not appropriately assessed, scoped, trained and supervised members of the clinical team and the overall governance arrangements were not consistently effective.

But many patients have rallied to support the centre, praising the care they have received. Scores of people responded on facebook to say they were shocked by the CQC decision.

Tricia Buchanan has set up the petition. On the petition site she says: “The practice is in danger of losing its license and has been placed in special measures. This is unacceptable to the patients they look after very capably and efficiently.

“Every staff member shows competence and professionalism, kindness and concern going out of their way to help people and treat them like adults with dignity. For thousands of their patients it’s the best GP Practice they have experienced in their lives. ”

Other patients said:  “What planet do these inspectors live on? The pressure these doctors work under must be enormous but they are always patient and caring.”

Another said: “This is the best surgery I’ve ever been to, I always get seen the same day I call, even just to talk about medication, the staff and doctors have been amazing, I literally cannot fault them at all, their a great team, they go above and beyond.”

Another added: “Mocketts Wood Surgery is excellent. The doctors are so caring and kind. We are so lucky to have such an amazing service in St Peter’s I cannot believe they received such a negative report. Not in line with the practice my family have received.”

However, other patients have backed the CQC with one saying: “The Commission is there for our safety and well-being. If Mockett’s Wood properly addresses the issues which caused it to fail inspections, then it can continue, only in an improved way. What’s wrong with that? I personally like to think my health and welfare is taken very seriously and is being impartially monitored. “Liking” a particular surgery or a GP doesn’t mean it’s performing to an acceptable standard.”

The previous rating for the surgery, which has  9,208 patients on the books,was in 2015 where it was found to be good. A regulatory review in May this year found no significant changes to the quality of service being provided. However, the issues were raised followed two announced inspections in July and August.

The CQC says the surgery must make improvements to: 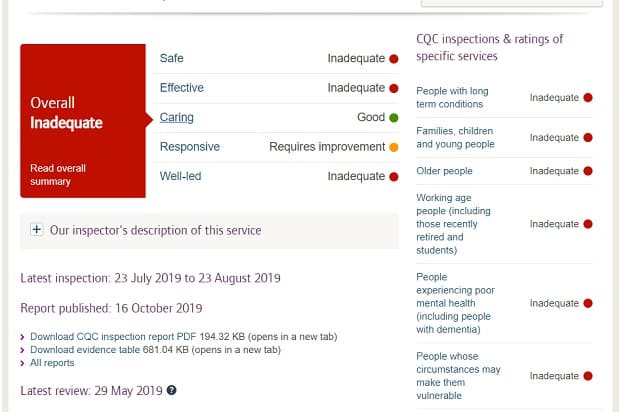