Arya, a small restaurant set in a dining room above The Ravensgate Arms in Ramsgate’s King Street has been awarded a Bib Gourmand in this year’s Michelin awards.

Both the food and the setting at Arya received praise from the inspector, who said: “This hidden gem sits in the heart of the town, There’s a delightful bar downstairs; upstairs is a dining room with a lively hum. It’s proudly run by a brother and sister: she keeps things running smoothly out front while he prepares interesting small plates with modern European influences.”

It’s an impressive accolade for Luke and Jess Crittenden, since neither have had experience running a restaurant before.

Ramsgate-born chef Luke realised he was at his most creative and happy in a kitchen, after he returned from his travels to Australia and took a position as a commis chef at The Marquis at Alkham. His passion for food and cooking then took him to London, where he worked with the likes of Gary Rhodes, and Chris and Jeff Galvin, becoming head chef at Polpetto, working with Florence Knight. 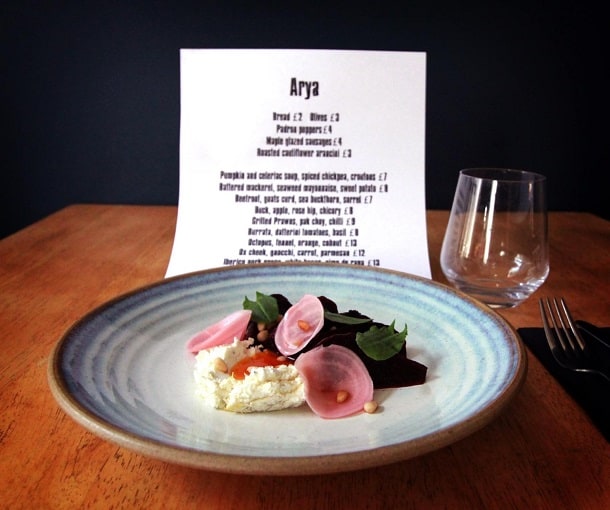 For sister Jess, opening Arya with her brother, has been her introduction to the world of hospitality; she has taken to her front-of-house duties with natural ease.

The passion for food runs through the Crittenden family, and the talent of brother Ben has just been recognised with the award of a Michelin star for his diminutive restaurant, Stark, in Broadstairs, the first such accolade in Thanet.

The menu of delicious small plates at Arya is simple, but packed full of flavour, and has influences from his London experiences.

Luke said:“Flavour is the most important thing for me. I  also enjoy foraging – it gives me valuable time to detox from the kitchen and reconnect with nature, a massive stress reliever! I try to incorporate these ingredients into my menu, creating dishes with these foraged items in mind.”

An extensive drinks list, including a wide range of beers, wine, small-batch spirits and seasonal cocktails, is offered  to diners by The Ravensgate Arms.