Families on housing benefit are being priced out of the rental market in Thanet, and across Britain, due to the continued housing benefit freeze, according to new research by the Bureau of Investigative Journalism.

The Isle of Thanet News has partnered with the Bureau on its Locked Out project, examining how the freeze is making and keeping people homeless.

The local housing allowance (LHA) was frozen as part of the government’s austerity policy in 2016. The allowance, which varies from region to region, was supposed to cover the cheapest 30% of the local rental market. However, since the freeze rents have kept rising, meaning many homes are now out of reach for those on the allowance.

Priced out in Thanet

In Thanet the LHA rate for a two-bed home is £123.62 per week but the research reveals that of 154 homes available on the isle during a day’s search not one was affordable for people on the allowance.

In fact the two-bed  housing allowance rate would need to rise to £159.95 to cover the cost of renting a home in the cheapest 30% on offer – equivalent to an extra £158 per month.

Nationally, the Bureau collected details of 62,695 two-bed rental properties and found just one in 20 were actually affordable on benefits.

This allowance shortfall means people are regularly having to rent more expensive homes and top up their housing benefit with other funds. That can mean families falling into debt and/or arrears.

To help those on housing benefits struggling with costs Thanet council made some 952 discretionary housing payment awards in the 2018/19 financial year.

Those payments totalled £471,786 with £437,080 of government funding and the remaining £34,706 coming out of council coffers. The cash was used for reasons such as helping with moving costs or help with rent payments.

According to research published by Shelter, many landlords also refuse to rent to people in receipt of housing benefit either because it is paid in arrears or due to general discrimination.

Reporters from the Bureau contacted the landlords of 180 two-bed properties UK-wide that would have been affordable on housing benefits. In each case the reporter claimed to be a single mother with an 8-year-old daughter.

Half of those landlords said definitively that they would not let to anyone on benefits. Of those that were left, more than half said they would consider letting to the hypothetical family, but only if they could fulfil further conditions, such as paying six months’ rent in advance or providing a guarantor.

Legislation to try and combat this means councils can offer cash incentives to private sector landlords so they will  let property to nominated families or individuals on housing benefits.

Research by Crisis and Alma Economics says a three-year investment to restore the rates of LHA would lift more than 32,000 UK households out of poverty, including 35,000 children.

Jon Sparkes, Chief Executive of Crisis, said “We should all have a safe and secure home. This investigation paints a clear picture that for the overwhelming majority, we’re not meeting this basic human need. This is simply unacceptable – we can and must do better.

“Housing benefit is a tool to prevent people from being forced into homelessness in the first place. But rates are currently failing to cover the cost of even the cheapest private rents in the majority of areas, pushing people to rent more expensive properties and making up the difference – skipping meals or not putting the heating on to try and ease this financial pressure and keep the roof over their head. We can’t let individuals shoulder this burden simply because housing benefit hasn’t kept up with rising rents.

“Long term solutions like building more social homes will help tackle homelessness and mean less people are left relying on privately renting. This will not happen overnight though, and the most immediate and effective way to reduce the pressure is to restore housing benefit rates to ensure they cover at least the cheapest third of rents across the country. It is vital that we see Government commitment to do so in the future Budget.”

The Government says it has increased more than 360 Local Housing Allowance rates this year, by targeting extra funding at low-income households, and is investing some £9 billion in affordable housing and an additional £2 billion after 2022.

The Housing Revenue Account borrowing cap has also been demolished, giving councils across the country the opportunity to deliver more affordable housing.

Thanet council owns 3,021 homes, which are managed by East Kent Housing, but demand has outstripped supply.

To tackle this the authority has undertaken its own scheme of building or refurbishing 150 homes by 2020 at a cost of £30million.

Some £14million has been spent on housing schemes across Thanet. These projects include a new build programme, Margate Housing Intervention project, Empty Homes Project 2012-15, and King Street intervention.

The council also plans to create its own housing company by April 1, 2020. The company would enable the council to directly buy land and build properties.

It is hoped the project will mean better standard housing, better management and more affordability for residents.

Forced to live in a tent 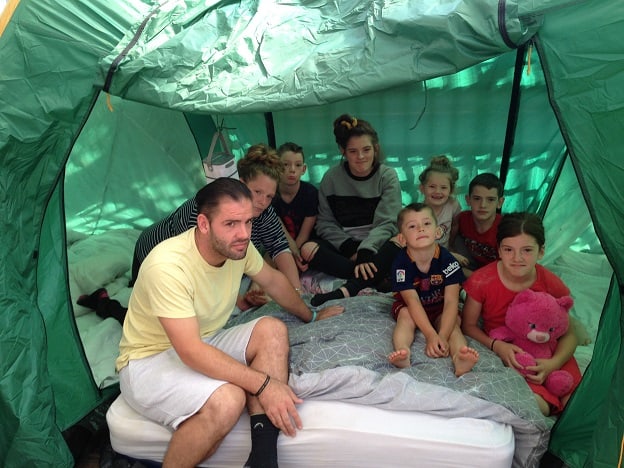 In our September print edition we highlighted the family of eight, including a three-year-old toddler, living in a tent after being evicted from their temporary home in Westgate.

Daniel and Joanne Foster said they were staying in a family member’s back garden after they were evicted from emergency accommodation.

Daniel, who is currently based in Ramsgate,  says their housing troubles snowballed after he was  forced to quit his job due to severe chest arthritis.

“I was working as a French polisher in London and I could not do the physical work – it was like I was having a heart attack. I was told to rest up,” he said.

Soon their rent payments began to accrue and they were forced to quit their Ramsgate home.

The 33-year-old became depressed and attempted suicide four times and as a coping mechanism both parents descended into addiction.

The couple separated with Daniel trying to secure help for depression at the Beacon centre but before his appointment he quit the district in a last ditch attempt to banish his demons. In the meantime Thanet council managed to re-house the rest of the family in Dover.

Eldest daughter Kaitlyn, 14, stayed with a relative to attend Sandwich Technology School but the other children remained in Thanet.

The situation improved in March of this year as Thanet council  moved them to emergency accommodation in Westgate – by this time Daniel had reconciled with the family.

Joanne said: “We loved living there and the kids were going to Northdown Primary and really loving it and settling into the routine. We stayed for as long as possible before we were evicted.”

As they have been deemed to have made themselves intentionally homeless the Fosters claim they had no choice but to camp out in the garden.

Joanne says they have been trying hard to find a home on the private market but factors including the size of their family and a reluctance from private landlords to accept tenants on universal credit has thwarted their attempts.

Devastatingly their only option maybe to contact social services forcing the family to split up – a prospect Joanne can not bear to think of: “I’d rather sleep on the street then let that happen.”

The family is being supported by Councillor Karen Constantine who is calling on Kent Social Service’s to take immediate action,

She said: “TDC appear to have had a complete ‘moral’ bypass, and are satisfied to see this family bounced between agencies. There appears to be nothing this family can do to get out of the dire situation they are in.

“They recently found a suitable 4 bedroom private rented house. TDC said they could not assist them with the guarantor issue. As a result they continue to face cold, damp nights in the tent.

“TDC need to be flexible and offer this family constructive support. Money doesn’t appear to be a problem when cash is needed for pontoons. People should come before pontoons. Shouldn’t they?’”

Read here: Out of prison, hearing voices and on the street – Margate dad pleads for someone ‘to listen’

Read here: MPs urged to act over shocking number of deaths of homeless people on our streets