Four firefighters have been recognised with an award for a rescue in Ramsgate while they were off-duty and still training for the job.

Tom Best, Sam Newton, Sam Colgan, Craig Redman were recognised for the rescue they carried out while in the early stages of their trainee recruit course to become firefighters.

Back in April, when they were about to sit down for dinner near Ramsgate harbour after a long day of training, they saw a man on a mobility scooter and his dog fall into the harbour from a pontoon. They ran to his assistance, laid down on the pontoon and reached in to keep his head above the water. Together they pulled him to safety and managed to rescue the dog and scooter from the sea too.

Although the man was wet and cold, with support from the trainee firefighters he was able to stand. They found towels and blankets to make him comfortable while they checked him over and took basic medical observations, before relaying important information to paramedics when an ambulance arrived.

Craig, who is now a firefighter at Dover station, said: “When the incident happened we didn’t really have time to think about it too much. Our careers were only in their infancy as we were trainees, but the bit of training we had had so far just kicked in  – we even used one of the knots that we’d just been taught, when we pulled the gentleman out of the water.”

Station Manager for Trainee Development Richard Nott said: “The decisive actions, speed of thought and team work displayed at such an early stage in their careers, without doubt saved the lives of the gentleman and his dog. A truly remarkable example of quick thinking, courage and ingenuity which most definitely deserves recognition.”

The acts of bravery, ingenuity and compassion were celebrated at Kent Fire and Rescue Service’s (KFRS) annual award at the Hadlow Manor Hotel yesterday (October 1) 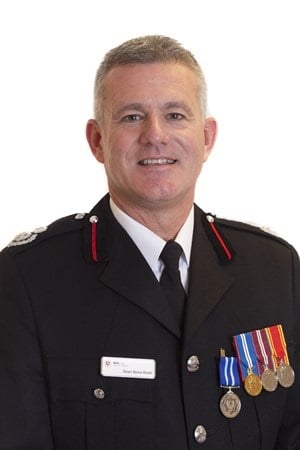 An award was also made to KFRS Operations Director Sean Bone-Knell who received the prestigious Kent Medal – a rare accolade recognising outstanding service and commitment to Kent Fire and Rescue Service and the wider Kent community.

He said: “To receive the Kent Medal is an extremely proud and humbling award for me and my family. Having joined Kent Fire and Rescue Service in 1986, I have experienced many incidents that have been sad, life changing, but also sometimes incredibly rewarding. I started my career in the Thanet area where I lived with my parents, and I have had the chance to work all over the county with some magnificent people and leaders. The fire service has changed over my 33 years and the service we have in Kent is now, and has always been, one of the best in the country. I am incredibly proud to be a member of our senior team and I know our communities are also proud the amazing staff that are ready to respond 24 hours a day. For me it is, and has always been, the best career in the world.”