A burst of colour with a political message can be seen either side of Northdown Hill in St Peter’s and Margate and off Thorne Hill in Minster.

The blaze of blue and gold are cover crops created with phacelia and sunflowers by farmers William Friend and son George.

A cover crop is planted to manage soil erosion, soil fertility, soil quality, water, weeds, pests,diseases, biodiversity and wildlife. It is planted between food crops rather than leaving the area fallow.

One purpose of the 50 acre crop is to display the Friends’ support for the UK remaining in the EU. Currently Brexit Day is scheduled for October 31 but this has been thrown into uncertainty with threats of a vote of no confidence in Prime Minister Boris Johnson and moves to block a no deal exit.

The actual use of the ‘EU’ crop is to attract bees, migrating birds and minimise nitrate leaching. 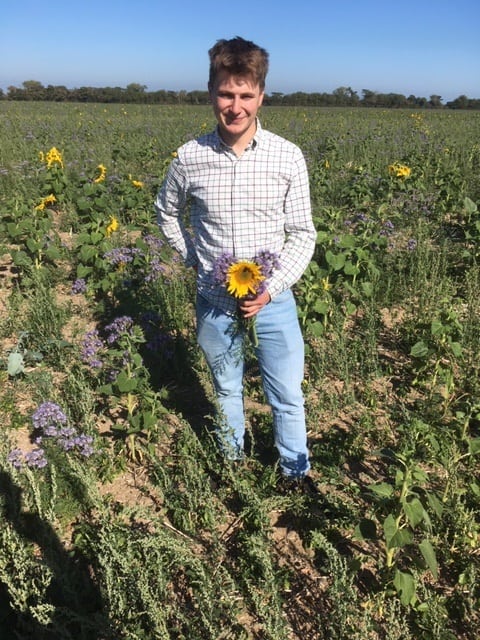 “This could all be lost if we open our borders to rainforest beef and US chlorinated chicken.”

“It is part of an EU funded agricultural- environment scheme to stop nitrogen leaching into the soil during the winter, to provide nectar for insects and, later, seeds for birds. The blue plant providing the background is phalacia with sunflowers providing the gold stars of the EU flag.” 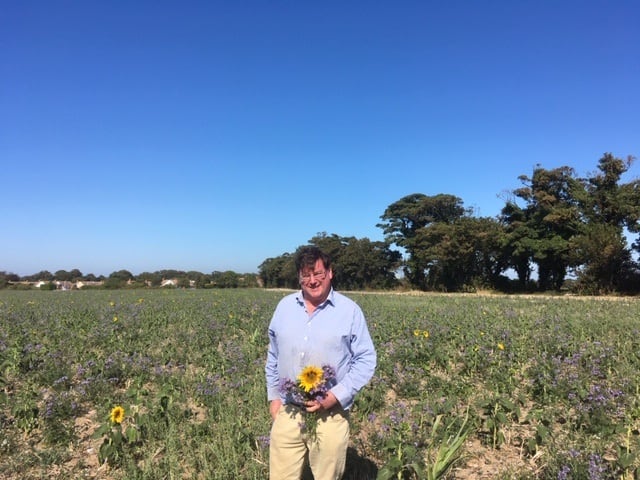 William and Louise Friend run farms, a plant nursery, Taddy’s Barn and the East Northdown Farm Business Centre in Thanet as well as businesses in Staffordshire.

William says EU membership has been beneficial for UK farming and brings more choice to shoppers as well as boosting the rural economy.

He said: “When we went into the EU, you could buy one sort of cheese, butter, one sort of beef and lamb and that was it. Since being in the EU artisan and regional food has mushroomed and the idea of getting nearer to your source of food is really important.”

William says if Britain exits the EU it will revert to ‘cheap food policy’ rather than supporting sustainable, quality foods. 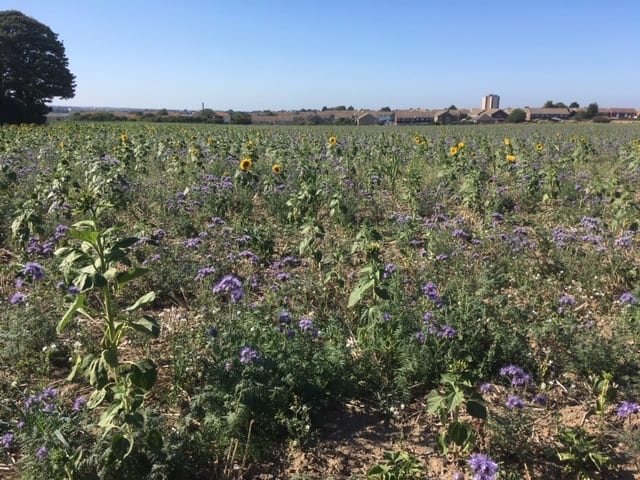 The Friends currently receive funding for a number of EU projects, such as managing ancient woodland and sustainable wood sources, preserving ancient farmland and species of grassland and environment nurturing schemes such as the flower cover crop to mop up nitrogen and  provide sustenance for bees and birds.

Was lovely to see. Hope it works in attracting wildlife. pic.twitter.com/IPvipS8iP5

He said: “This corner of Thanet is really important for migrating birds and as they come in from the Continent they end up at Foreland and Foreness and my farm is one of the first green spaces they will reach.”

In the EU election vote this May Thanet votes were in favour of The Brexit Party (49%), headed by Nigel Farage, Liberal Democrats polling second and Green Party third.