Red roses floated out to sea, bubbles were blown and candles lit at a memorial event in Margate in memory of six-year-old Lucas Dobson.

Lucas lost his life after falling into the River Stour on Saturday, August 17, while out fishing with his dad Nathan and friends.

Despite Nathan and other adults jumping into the water to rescue him, Lucas could not be found.

A huge search was mounted by emergency services and hundreds of volunteers over the course of four full days. Lucas’s body was recovered on Wednesday (August 21) on the fifth day of the search.

A gathering to light candles and show support for Lucas’s family is tonight being held at the King’s Steps until 9pm. 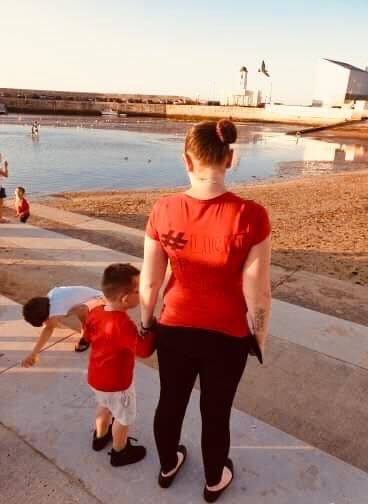 It was organised by Margate resident Abbie Small (pictured above). She said: “I would like to thank everyone that came to remember young Lucas. The turn out was amazing and we really did light Margate up with candles sparklers and smiles as well as all the flowers, which were amazing! We raised a massive £120, so well done Margate!”

A donation of flowers was also made by The Secret Garden in Northdown Road.

Isle photographer John Horton, who attended with his two sons, said: “It was a very sombre moment- time to reflect, to remember , to feel as one as a community. It was highly emotionally charged and no one afraid to shed a tear.

“There was a really feeling of “oneness” solidarity – the chalked message “God Bless you Lucas- Margate loves you” says it all.”

On Saturday (August 24) a further vigil will be held by the hands sculpture by Ramsgate Boating Pool, Royal Esplanade, at 6pm.

Vigils have also been, or are due to be, held around east Kent including in Sandwich, Deal and Herne Bay,