One of the original stars of the 1976 Bugsy Malone movie will be opening the Prison to Pavement exhibition in Margate this evening (August 16).

Donald Waugh, who played Snake Eyes, one of Fat Sam’s hoodlums in the movie which starred Jodie Foster and Scott Baio, will be part of the Stretch Outsider exhibition opening at the former Woolworth premises in the High Street.

He was invited by Stretch Outsider gallery boss Dean Stalham after the pair previously worked together on projects in London and Canterbury.

Prison to Pavement includes at least 40 art works from those who have experienced prison, homelessness and mental ill health.

For Donald it is a cause close to his heart, having experienced eight years of homelessness and sofa surfing after a property deal for a new home in Ireland went bad and being the creator of the Pavement 2 Catwalk community interest company.

The CIC works with those affected by homelessness, addiction, disability and mental health to create fashion and art from recycled materials.

Donald founded the Pavement 2 catwalk after working with homelessness charity Crisis, and this itself was prompted by his own change of circumstances and the help that was offered to him.

He said: “I had a very affluent life, doing musicals like Cats, being in Bugsy Malone and Grange Hill, and then suddenly I lost everything and became homeless.

“I was homeless and sofa surfing for eight years and it nearly drove me mad.”

Donald was duped in a property deal but says he was too ashamed to tell anyone and was eventually ditched by hi agent for not attending auditions.

He said: “I ended up in the Midlands and became a carbon copy of myself, at times I would think ‘did I ever really act?’ I started to drink, became an alcoholic.”

But Donald then managed to get to London and  was helped by a number of people, inspiring him to help others.

He said: “Homelessness o any kind of major blow in life can happen to anyone. People think ‘poor thing, he lost everything’ but if I had not followed that path I would not be here now, would not have done the stuff I have or met the people I have met.

“If I focus on what I do not have that would spiral me into depression but  I focus on creating something magical, something of beauty.

“Where there is life, there is hope. If you messed up yesterday but have today, then there is the option for change. It is always about hope,”

Donald’s work with Pavement to Catwalk loos at how homelessness, addiction, disability and mental health are all intrinsically linked but how creativity can become a path to a better life.

Currently he is working on a project in Milan with refugees who are creating a ‘dressed’ mannequin using things that mean something to them, it could be a remnant from home or something representing their experience of Italy. The art created will be printed on fabric or T.shirts.

It is a project that Donald hopes to bring to Margate before the end of the year and he is in discussions with Dean about how this could be done, The aim is to replicate the project with residents of the town touched by issues such as homelessness and/or disadvantages.

He said: “We could put on a theatre piece with music and film or an exhibition. “

Talking of the Pavement to Prison exhibition Donald said: “I find it really authentic, earthy and thought provoking. It’s very real and I like authenticity. The setting upstairs is perfect, it is like going into someone else’s world.” 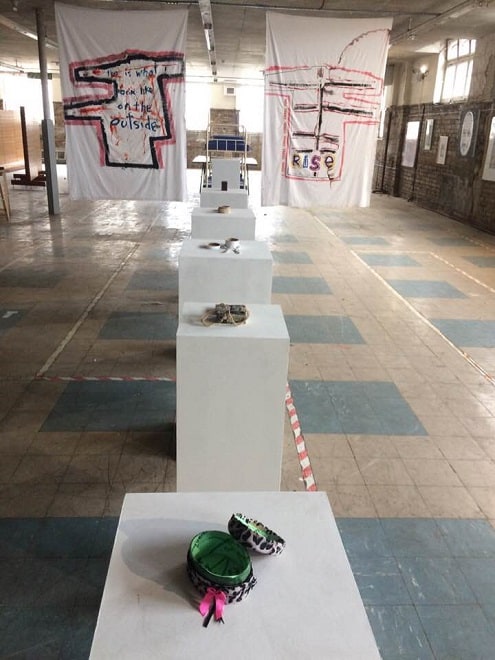 Prison to Pavement opens tonight (August 16) starting with a tour of the art at 6pm, Donald’s opening at 7pm and then music from In House Records -a  live band of serving prisoners from Standford Hill prison in Sheppey  – at 7.30pm.

The exhibition will feature works from artists including Chris Wilson, Steven Ellis, Jeremy Deller and a private collection of prison art and soap sculptures from Matthew Meadows (author of book ‘Insider Art’). Outsider Art charity Outside In will also display a selection of works from their former-prisoners.

There will also be bags  for sale designed by prisoners on the Makeright Design programme from the Design Against Against Crime Research Centre at Central Saint Martins, UAL and a music packed after party for attendees of the exhibition opening.

Prison to Pavement is then open at the Margate School (former Woolworth building) in Margate High Street every day after from 3pm to 8pm until September 1.