Broadstairs’ survival in Division 1 hangs in the balance as they slumped to a disappointing defeat away to Folkestone, despite fielding their strongest side of the season. Having lost the toss and invited to bat in the worst of the conditions on a very blustery day, it was always going to be a challenging afternoon.

Despite this, the visitors seemed to be heading towards a 200-plus score, reaching 88-2 at the drinks break with Jayojit Basu having just completed his half-century. The early loss of Jack Wheeler brought Basu together with a fluent-looking Alex Hogben (22) and their partnership had been worth 40 runs. At the half-way mark with, Scott Narraway at the crease and plenty more batting to come, Broadstairs were in the driver’s seat. 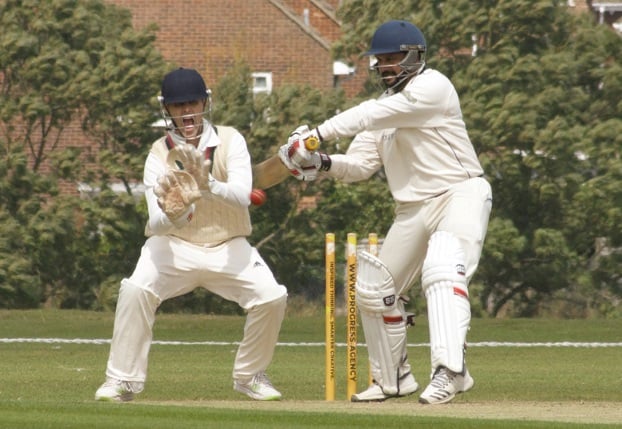 However, the loss of Basu (52), Elliot Fox (1) and Narraway (17) in relatively quick succession reduced the visitors to 111-5 and set the challenge for Matt Frewin (25) and Jamie Dewell (16) to rebuild from scratch. Together they put on 48 runs to bring the total to a respectable 159. Following their departure with still 10 overs remaining, only Matt Hardy (7) looked comfortable but his untimely run-out effectively brought the innings to a close and soon after, the visitors were bowled-out for 179 in the 48th over. 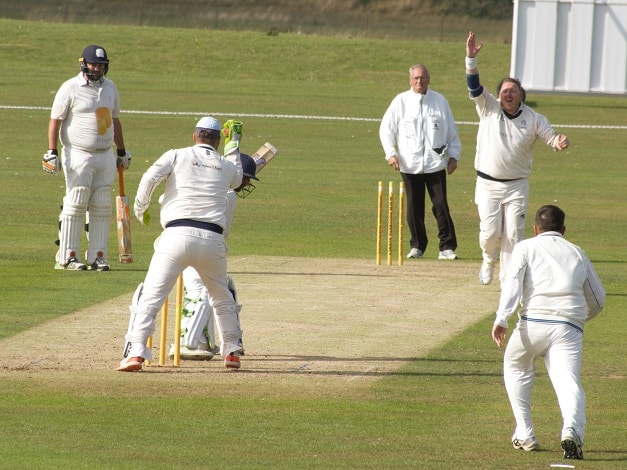 The second innings began well enough for Broadstairs with Bradley Ellison (2-41) and Matt Hardy (1-15) reducing the hosts to 29-3. A lively LBW appeal on the stroke of drinks was the turning point of the match – Morgan survived the appeal and together with Lysaught, went on to build a match-winning partnership of 131. Despite ringing the changes throughout the remaining overs, when the breakthrough came with Dewell’s dismissal of Morgan for 52, it arrived too late to make a difference to the result. With the sun shining and the wind now barely a breeze, Folkestone eased their way to victory with wickets and overs to spare.

The contrasting playing conditions aside, a major difference between the teams was the batting – eight of the Broadstairs team didn’t get to the twenties, with six not reaching double figures. Equally important though was the loss of batsmen who had got themselves in and as Folkestone proved this week, individual scores of 70-plus and partnerships of 50-plus form the basis of winning totals.

Broadstairs’ battle for survival continues at the weekend as they host promotion hopefuls Holmesdale.

Broadstairs consolidated their 3rd place spot in Division 1 with their 9th win of the season as they hosted Folkestone CC on a blustery afternoon. Losing the toss and being invited to bat, the opening partnership of George Kidd and Lewis Hewitt began well, putting on 42 runs before Hewitt was dismissed for 22 in the 9th over. This brought Nathan Fox to the crease who would bat out the next 37 overs and hit a match-winning 120 off 105 balls (his 3rd ton of the season), ably supported by Kidd (29), Tom Marshall (25), Harry Carter (15) and Josh Marshall (17). Following Fox’s departure, Masoud Rangin took over scoring duties hitting an entertaining 24 from 12 balls bringing the hosts’ final total to 279.

Next match, the 2nd XI travel to Bickley Park, hoping for a repeat of their victory in the corresponding home fixture earlier in the season.