Thanet council enforcement officers have identified the group responsible for leaving a mountain of litter on Margate Main Sands on July 27.

The mess left behind was shocking and images taken by isle photographer Frank Leppard went viral with a facebook reach of more than one million.

The mountains of rubbish, including bottles, disposable plates and cups,discarded wrappings,buckets and even broken tents, came just two days after council workers had to clear a similar scene of litter. There was also evidence of black bin bags.

In a statement online the authority said: “This particular group who visited the beach that day used the location to host an organised event and sold tickets via online community platforms. However, they had not notified our events team and therefore had not gone through any events process or obtained any approval to use the beach in this way. Another group who were also on the beach did follow this process and had obtained the appropriate approval. 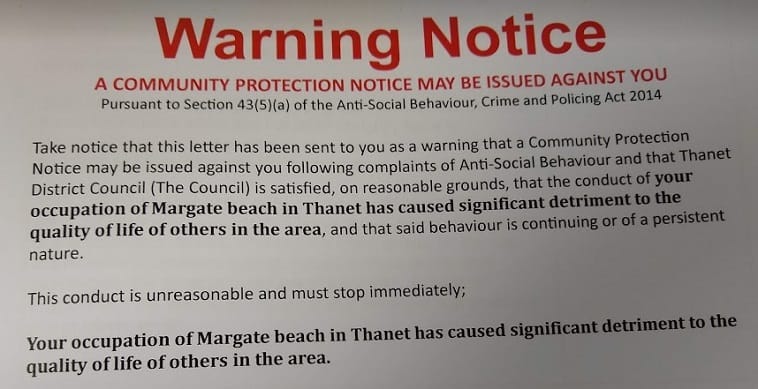 “By undertaking significant investigative work and in partnership with the coach companies who brought the group to the area, we have since been able to trace the organisers. These individuals have been issued with a Community Protection Warning Notice. Intelligence will also be shared with relevant partner agencies in London and Essex.

“The warning ensures that if the organisers of the group intend to return to Thanet to host another event, that they must receive permission from Thanet District Council to do so, and adhere to our events procedure. It also incorporates actions to protect the coach companies from anti-social behaviour, which they and their drivers experienced two weeks ago.

“Failure to comply results in a Community Protection Notice (CPN) which is intended to deal with unreasonable, ongoing problems or persistent anti-social behaviour which negatively affect the community’s quality of life by targeting the person or persons responsible. Failure to comply with the CPN can lead to a fixed penalty notice, remedial action or a court order.”

One coach company told The Isle of Thanet News that their vehicle was trashed, with the driver spending two hours trying to get it clean.

The Thanet council statement adds: “We want to send a strong message to those responsible that this behaviour was and will always be unacceptable. Being able to identify the group and take the legal action available, is a positive step to ensure this does not happen again. We do not ever want others to experience such a shocking disregard for our beaches in the future.”