The Mayor of Ramsgate Raushan Ara fired the cannon this morning (July 22) at 11am for the official start of Euromarine Insurance Ramsgate Week.

She was aided by the Royal Temple Yacht Club’s gunner Dave Peters as the countdown was read out by Fiona Rawbone. Fiona is part of the Race Hut Team led by Peter Holland, chief Race Officer for cruiser classes on loan from Broadstairs Sailing Club.

Chairman Karen Cox had previously hosted a breakfast for the Mayor at the Galley cafe underneath the yacht club. She said: “It’s important that we involve the local community in our annual regatta which has been going on for over 100 years. This year we are grateful to Broadstairs-based Euromarine Insurance Services who are our headline sponsor. 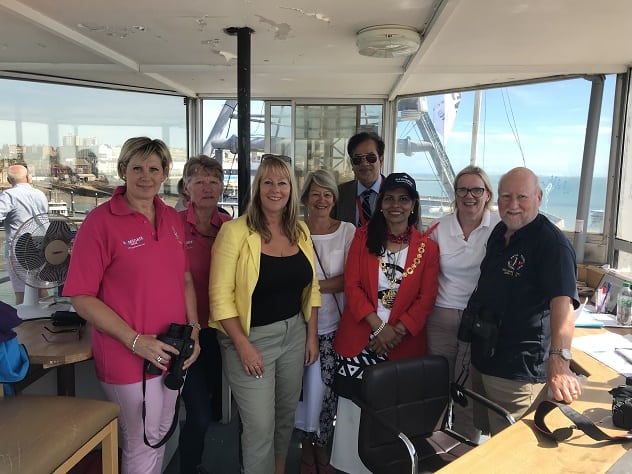 “Without support from them and other local companies like Miles & Barr, Page & Sons, and Whitstable Bay we would be unable to run this event. We are grateful to the Mayor and her husband for taking time out of their busy schedule to show support for the event.”

All races start at 11am

The IRC Fleet will compete in 2 Races. Both races will form part of the QEII Cup as well as being part SpinlockIRC East Coast Regional Championships Races 2 & 3 and also be scored  for  the continuing IRC Regatta Series Races 4 & 5

The Gold Cup, a race which is competed for by all lRC yachts and also the majority of the Cruiser Classes 5 & 6

This race is also scored as part of the Spinlock IRC East Coast Regional Championships Race 4, as well as being Race 6 of the IRC Regatta Series and Race 5 of the Cruisers Regatta Series.

The race starts can be viewed from the beach or the harbour wall and will start at 11am every day except for Sunday when the Cruiser Fleet will join theIRC Fleet in their offshore Committee boat stall at 10am.