Police are investigating the spate of fires that took place at Invicta House in Margate last week and housing bosses have now pledged 24/7 security.

Emergency crews attended the fifth  fire in a week– and the second in less than 12 hours – at the Millmead Road towerblock on July 13.

There was also a fire in one of the lifts on July 11).

On July 10 four fire engines and the height vehicle attended the Millmead Road towerblock due to a bin fire. This followed a call out on July 7 when three engines, including the height vehicle, responded to the call at the flats when a cigarette butt in the chute started a fire.

Last year firefighters were called to the block three times in one week following a spate of deliberate fires, mainly in the rubbish chutes but one more worryingly in the stairwell. 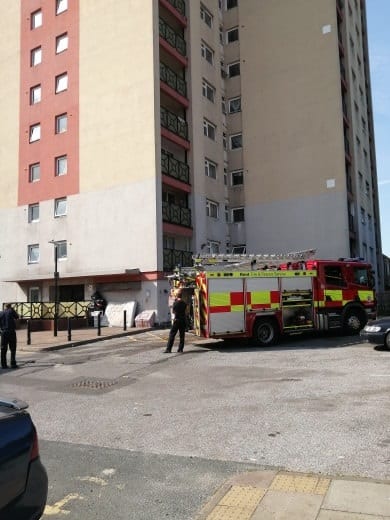 A spokesperson said: “Kent Police received reports that five small fires had taken place within a bin chute in the building in Millmead Road between Sunday 7 July and Saturday 13 July.
“Officers are currently treating the fires as suspicious and are working with the Kent Fire and Rescue Service to establish the circumstances surrounding the fires.”

Ward councillor Gary Taylor has raised the issue with Thanet council’s head of housing Bob Porter. Mr Porter has asked East Kent Housing for a full report and to advise about any mitigation or security measures needed at the block as a result.

A spokesperson for Thanet District Council and East Kent Housing said 24/7 security is to be provided.

They added:“We take fire safety extremely seriously, and having been made aware of the recent incidents at Invicta House we have been liaising closely with local police and Kent Fire & Rescue Service. We have increased our presence on site and are providing a 24 hour, 7 day a week security presence for the block.

“We encourage people to be careful and aware of any dangers, and urge everyone to ensure they do not place lighted items in the bin chutes.

“If anyone has relevant information about these fires we ask them to please get in touch with CrimeStoppers on Freephone 0800 555 111. All calls are anonymous.”

Ward councillor Gary Taylor said he had been advised PCSOs will also monitor the towerblock.