Soul of Santana, the ultimate homage to Carlos ‎Santana and his band, returns to the stage at Broadstairs Pavilion tomorrow (Friday, July 12).

It is the home debut with the band for former Bad Manners drummer Brian Tuitt on percussion, alongside fellow Ramsgate drummer Steve Wyse, who lays down the infectious Latin rock beat.

Steve said: “It is great playing in your home area and Brian and myself are really looking forward to getting the rhythm going that propels the show.

“There’s no denying the impact Santana’s first few albums has had on the history of rock ‘n’ roll – as Santana fanatics we perform the classic songs of this mighty guitarist with true passion.

“The show is keeping the Santana legacy alive – you will witness a true rock tribute to one of the world’s greatest artists, faithfully delivered.”

The percussionists are joined by Andrew Lissamore who underpins the groove with faultless bass, Chelle Free on keys that add both melody and attack, and front man Morne Gabriels whose distinctive vocals add detail to the Santana sonic backdrop.

Canterbury guitarist, session player, producer and sound engineer Steve Freeman (corr sp) dons the mantle of Carlos Santana.  It is not an easy role by any means and Steve has studied Carlos Santana’s style and technique to ensure the real feel of the man’s music is delivered faithfully.

He said: “It is a big ask but as a band we want to give the best interpretation of the music as possible. Santana is an exceptionally versatile player and I have studied his style in depth. It is hard work but it has to be that way if you are going to do this sort of project with the passion and creativity it demands. There’s a lot of notes in a two hour show and it has to be just right.” 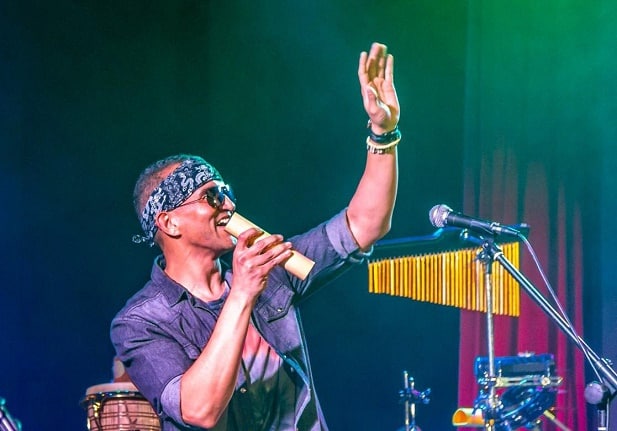 The Soul of Santana show takes listeners from the exultant heights of hits as ‘Smooth’, ‘Evil Ways’, ‘She’s Not There’, and ‘Soul Sacrifice’, to the cathartic Salsa classics contained on the bestselling 1999 Supernatural and 2016 Santana IV albums.