Joyful and uplifting songs and a powerful performance will be hallmarks of the summer concert by Thanet’s BIGMOUTH Chorus on Friday, July 19.

Her talent and passion for community choirs and the singers’ skills and enthusiasm will raise the roof when they return to Queen’s Road Baptist Church, Broadstairs, with an eclectic and upbeat programme.  This follows the resounding success of their debut 2018 concert.

Rock, pop, soul, spirituals, shape singing and folk will be among the diverse sounds, mostly in four-part harmony, and including some of Emily’s own arrangements.

Artists featured include The Beatles, U2, Simon and Garfunkel, Guns and Roses, Queen, The Bangles, Prince, Rihanna and Aretha Franklin.

A number of stirring African songs will have toes tapping and hands clapping. 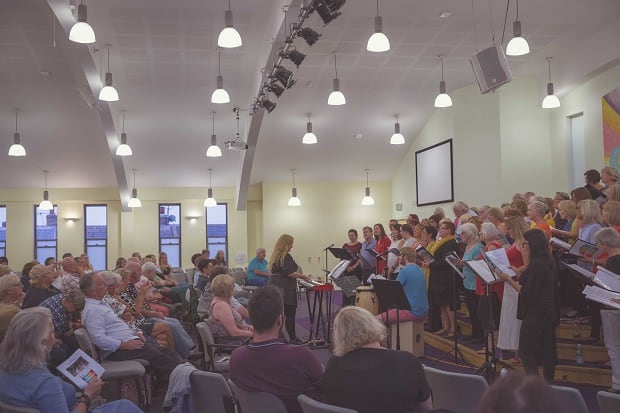 They include Bambelela, hailing from a South African township and once sung as a protest song in the Apartheid era, now sung as a song of encouragement in the fight against Aids, and Shosholoza, adopted in South Africa for the 1995 Rugby World Cup, originally sung by the country’s miners as motivation in treacherously tough working conditions.

Another special feature will be Shape Note Singing, based on a music notation introduced in 18th Century England to enable congregational and community singing.

Members of Emily’s Whitstable community choir, en Choir, will join BIGMOUTH Chorus in the second half of the performance.  Singers from BIGMOUTH will then join en Choir the following evening (Saturday, July 20) for their annual concert at St Alphege Church in Whitstable High Street.

BIGMOUTH has about 60 members, ranging in age from 16 to 90, drawn from across Thanet.

Emily said: “The choir have worked tirelessly this year, striving for excellence, and this will be a fantastic concert.”

She has earnt much critical acclaim for her work and is well known for her research-led music and interactive sound works for galleries and public spaces, including large-scale community events and intimate sound installations.

The concert starts at 7.30pm, doors open at 7pm and there will be refreshments in the break. Tickets are £8/£6 concessions.  Children under 12 are free.  Buy tickets at www.wegottickets.com (search for BIGMOUTH Chorus.) ) or from Three Graces, 2 The Broadway, Broadstairs, and on the door subject to availability.  For more information see: www.bigmouthchorus.com or email: bigmouthchorus@gmail.com