The former owner of an eight month old female Alsatian which was found dead at the East Cliff Chine yesterday (June 25) after being bound, stabbed and shaved, says she has not stopped crying since discovering the harrowing details.

Destiny Glazier, who is expecting her second child, says she had to give up pup Bow due to having to move.

She says the situation meant she had to rehome her ‘gentle’ dog around four weeks ago and thought she had found the ideal person to take over the care of Bow.

Destiny, from Ramsgate, discovered the dog had been the victim of a horrific attack after seeing a photo of the pup’s body on social media as part of an appeal for information from the RSPCA. 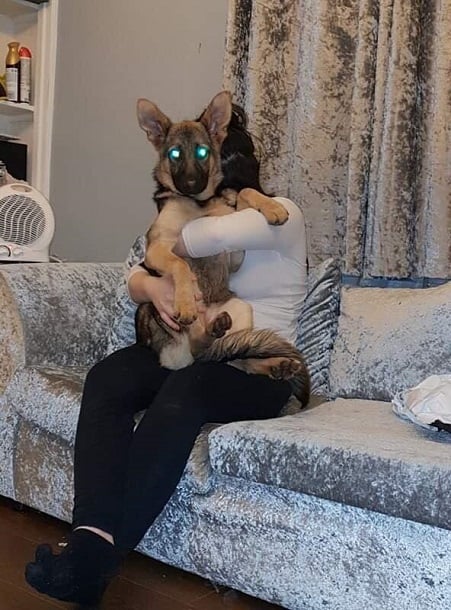 Bow’s body was discovered by a dog walker. Her muzzle and legs were bound with strips of some kind of material, which meant she had been tied up into a small ball. She also had an incision or stab wound on top of her head where her fur had also been shaved.

The dog warden was alerted and Bow’s body was taken to Thanet Vets in Margate before the RSPCA were contacted.

Destiny said: “Me and my family are in bits. I saw the post and knew, then my partner went to the vets to confirm it was her.

“I had to move and was getting no help from the council so thought it was best to rehome her. She also needed more time with someone with no kids who would walk her everyday .

“It was so horrible seeing her like that. She was so gentle, I don’t know how someone could’ve done this to her. Her head was shaved and cut, I haven’t stopped crying since I found out.”

Destiny says she has passed the relevant details on to the authorities.

He said: “This must have been an incredibly distressing discovery for the member of the public who found this poor dog. I’ve been an inspector for many years but this really is shocking. We believe the injured dog had been tied up and dumped in the sea.

“The vets also believe that the dog was in season before she died and that due to bruising and swelling on her muzzle as well as blood in her mouth, it would appear as though she was alive before she was bound.

“A black Nike holdall was found with her and contained the same material she was tied up with. Although she wasn’t inside it, it appears like whoever did this had tried and failed to place her in the bag as the bag was also full of seaweed and sand.

“The poor dog was also very underweight and has no microchip.

“We are now appealing for anyone who may have any information which could help our investigation, to contact the inspectorate appeal line in strictest confidence on 0300 123 8018.”

The investigation continues and no arrests have been made as yet. The identity of the perpetrator is not yet known or been confirmed.

A Kent Police spokesperson said: “Kent Police is assisting the RSPCA following a report that a dead dog was found on a beach in Ramsgate on 25 June. Enquiries are ongoing to establish the circumstances of the death.”

For advice on rehoming a dog visit https://www.rspca.org.uk/findapet/rehomeapet/process/rehomeadog

To help the RSPCA continue rescuing, rehabilitating and rehoming animals in desperate need of care please visit the website.