Southern Water has agreed to pay £126million in penalties and rebate payments to customers following serious failures in the operation of its sewage treatment sites and for deliberately misreporting its performance during 2010-2017.

In the course of a large-scale investigation into the water company, Ofwat found that Southern Water failed to operate a number of wastewater treatments works properly, including not making the necessary investment which led to equipment failures and spills of wastewater into the environment.

Ofwat also found that Southern Water staff manipulated the wastewater sampling process which resulted in misreporting information about the performance of a number of sewage treatment sites. This meant the company avoided penalties under Ofwat’s incentive regime.

The £126m package will see Southern Water pay a rebate of £123m to customers through their bills and  a fine of £3m.

The rebate includes £91m in penalties Southern Water had avoided and a further £32m of payments as recognition of their serious failures.

Proportionate to the size of the business, this package of penalties and payments is the biggest Ofwat has ever imposed. The amount would have been larger had Southern Water not co-operated with our investigation, addressed its failings and agreed to this payment package.

Southern Water wastewater customers should expect a rebate on their bills of £61, with £17 in 2020/21 and £11 in each of the following four years.

Southern Water appointed a new Chief Executive in January 2017 and there have been substantial changes to the company’s management team following this. Southern Water has introduced and committed to new governance arrangements to support accurate monitoring and reporting, and a programme to change the company’s culture, which enabled these failings and behaviours. Investment has also been made into the failing treatment sites and work will continue to improve them.

As part of the proposed settlement, Southern Water will need to report to Ofwat on its progress in upholding these commitments.

Ofwat Chief Executive, Rachel Fletcher, said: “What we found in this case is shocking. In all, it shows the company was being run with scant regard for its responsibilities to society and the environment. It was not just the poor operational performance, but the co-ordinated efforts to hide and deceive customers of the fact that are so troubling. The previous management failed to stamp out this behaviour and failed to manage its plants properly. In doing so, Southern Water let-down its customers and operated in a way completely counter to the public service ethos we expect. That is why the company deserves such a significant sanction.  We also think it is important Southern Water has a formal fine on their record for this serious breach.”

“This began in 2016 and revealed issues which required separate consideration by Ofwat, leading to today’s penalty. The environmental aspect of the investigation is ongoing and we expect to commence court proceedings soon.”

Southern Water said it was “deeply sorry,” and had carried out a number of measures since 2017 including an overhaul of the management team.

Southern Water began investigating issues at its wastewater treatment sites in July 2016 before alerting Ofwat to deeper issues in March 2017.

The key finding from Ofwat is that between 2010 and 2017 some of Southern Water’s waste water treatment sites were manipulated by staff to pass sampling tests they otherwise might have failed.

Southern Water has supported the investigations and has simultaneously completed its own extensive internal review, which highlighted failures of people, processes and systems during that period.

Ian McAulay, Southern Water’s Chief Executive, said: “In 2017, I was brought in to drive change and transformation. Since then we have been working very hard to understand past failings and implement the changes required to ensure we better deliver for our customers and meet the standards they deserve.”

“We are deeply sorry for what has happened. There are no excuses for the failings that occurred between 2010 and 2017 outlined in Ofwat’s report. We have clearly fallen far short of the expectations and trust placed in us by our wastewater customers and the wider communities we serve.”

“We are fully committed to continuing the fast pace of change delivered since 2017. There is a lot more work to do but we’re pleased that this proposal agreed with Ofwat enables us to fully make amends to our customers and regain their trust as quickly as possible.” 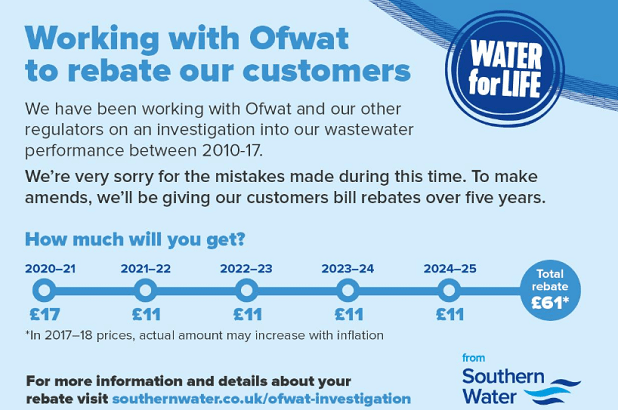 The firm says customers will not bear the cost of the penalties and an Action Plan has been agreed with Ofwat.