Dreamland – An exhibition of photography by Ben Finch 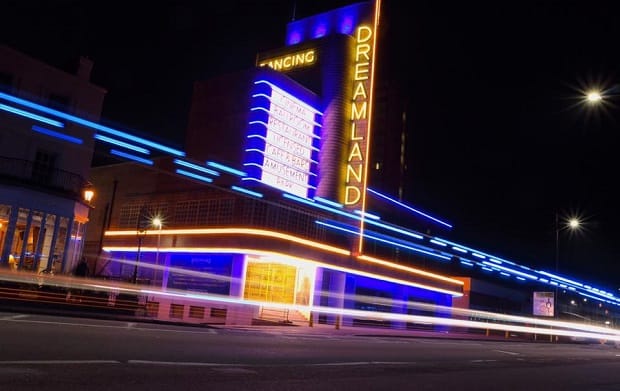 “Ever since my Mum moved to Margate from London, I have had nothing but inspiration from local landmarks such as fiery sunsets over the harbour arm or the wonderful Dreamland building lit up at night. With my exhibition ‘Dreamland’ my aim is to offer a unique perspective through the lens of my camera.”

Our oceans, beaches and marine life are under threat from plastic pollution as never before – and the countdown to a potential full-scale environmental disaster has begun.

That’s the message three Kent artists, who have been friends since their university days, are pressing home with their second exhibition at a Thanet art gallery. They aim to increase awareness  of  the devastating and often deadly impact plastic pollution can have on our seas and marine life.

“U-Turn Now” – at Ramsgate’s York Street Gallery from now until June 12– is a follow-up to their exhibition at the same venue a year ago.  Their first exhibition, ”SOS – Save Our Seas” – had a similar theme.

The three artists, Marilyn Orpin, Thel Findlay and Ba Stunt, all studied fine art degrees at Canterbury’s University for the Creative Arts. The three have something else in common. They all live near the sea – Marilyn at Minster on the Isle of Sheppey, Thel from Broadstairs and Ba from near Dover.

Former Aston Villa player and manager Brian Little will be giving a Q&A for members of the Official Kent Lions supporters club this Saturday (June 8).

The event, which is also the group’s annual meeting, will be held at Ramsgate FC, in Price’s Avenue. Entry is £3 on the door if you do not have a ticket. All ages welcome. (U13’s free)
Doors open at 3pm, there is a bar and a small buffet will be available.

There will be the opportunity to buy Brian’s book, paperback £12.99 – hardback £18.99.
There will also be a raffle to raise funds for the Lions’ club and information available for those who would like to join up. Exclusive Kent Lion’s badges will be available to buy.
Card payments are accepted but cash may be more reliable than the wifi!

Summer Escape is showing an exciting collection of bright holiday paintings, etchings and prints. This compliments the Turner Contemporary Summer exhibition ‘Seaside Photographed’, which examines the relationship between photographers, photography and the British seaside. We look forward to welcoming holiday visitors and local art lovers to enjoy the ‘Summer Escape’ collection, celebrating the light and freedom that summertime brings.

Anthony Giles is a landscape painter whose work is often started ‘plein air’. Even the larger canvasses are often started on a windy beach or marsh in Kent. Often the pieces are ‘worked up’ over several months back in his studio, where he translates the outdoor colour, shadow and light into a finished piece.

Claire Gill has always used photography as a way of exploring the world and researching creative projects and is now using it as a more central tool in the development of her work. Claire uses the computer to digitally juxtapose and combine the images she takes with one another to create photomontages.

Greg Bottle has been taking photos since he was a child after his grandfather gave him his rangefinder camera. He first got serious about photography in 1984 when he took up scuba diving as he wanted to show others what he’d seen whilst diving. Photography is a way of life for Greg and he says “I can’t imagine life without it”.

Hugh Ribbans trained at Canterbury College of Art.  Relief printmaking was his craft subject at college, particularly lino-cutting, and in 1989 he purchased a restored Columbian press, c.1860. He produces linocuts and woodcuts, sometimes mixing heavily grained wood – often driftwood – and lino in his prints.

Graham Ward has been influenced by the ancient Spanish School of painters, and his use of tempera and gold leaf in many of his works reflects an interest in the sacred aspects of representational subject-matter. Working largely on board, his use of modern acrylics work suitably with the methods of the 12th and 13th century painters of the Romanesque, where tempera painting was popular. His subjects continue to be animals and child-like figures; many of his paintings concentrate on the individual in an invented landscape, often populated by child-kings and Holy fools.

Dawn Cole has a fascination with archives and uses her own family archives as a starting point. Her work is the result of extensive research and experimentation. Dawn Cole is an award winning artist and independent curator who works from her studio in Birchington, Kent. Winning the prestigious V&A prize at the International Print Biennale, she went on to be short-listed for the Arts Foundation Award in 2013. Her work has been acquired by the V&A for their permanent collection. Cole works in a variety of media, often focusing on printmaking and pattern.

Michael Blaker was a writer and artist specialising in etching. He was for ten years editor/designer of the Printmakers Journal, the annual magazine of the Royal Society of Painter-Printmakers, of which he is a Senior Fellow (RE). He has contributed many articles to Printmaking Today, of which he was an Editorial Consultant. He has also written extensively for the Artist Magazine, Leisure Painter and Pictures and Prints.

Combining a love of travel and painting, Nick Kelly has always carried a small watercolour kit on tour so that as the chance presented itself he could sit and take in the beauty of a certain scene or magic moment, create a quick sketch and with a few brush strokes bring a small piece of cartridge paper to life with some fluid pastel colours. The fascination of the translucence of watercolour has urged Nick to capture a particular light or shadow using the medium.

The work of artist printmaker Ruth McDonald reflects her interest in her local woodland landscape and the sea when illuminated by failing light and the moon to expose the traces left by past inhabitants.  Preferred sites are constantly revisited, re-worked and re-ordered with her explorations investigating beyond the evident as she seeks to reveal images as ciphers and signs of the unknown.

With Bob Hall and Hilary Blythe.  The American Blues legend returns to Sarah Thorne on his latest world tour.

For further information go to www.sarahthornetheatre.co.uk

Strictly over 18 – ID may be required

This first event is the collaboration of Alto Saxophonist and percussionist Kevin Haynes, Grammy winning ‘percussion virtuoso’ Hammadi Valdes and pioneering electronic producer Vince Vella who have joined forces to show how traditional Afro-Cuban instrumentation and technology can come together, creating new sounds that go above and beyond the constraints of genre classifications.

The first of five shows in a new partnership between Jazz re:freshed and Olby’s Soul Cafe & Music Rooms made possible by funding from Arts Council England.

Seating is limited and on a first come first serve basis.

Join this ‘World Ocean Day’ walk amd talk with Tony Child (Thanet Coast Project) that will take you around the stunning Kingsgate coastline – starting from the beach in Botany Bay to Kingsgate Bay in Broadstairs on the Thanet Coast.

The talk takes in the cliffs, caves and castles on a stroll along the beach and chalk reef within the ‘North East Kent Marine Protected Area’ (NEKMPA) with a chance to hear about citizen science project work – such as the ‘Shoresearch’ recording of marine life on the Kent coast.

Please wear suitable footwear for walking on the chalk rocks, rockpools and along the beach; and suitable clothing for the weather conditions on the day – rain/windproof jackets, if raining or wet and cold; and suncream, hats and light clothing over, if sunny and the UV is high!

This walk is suitable for people of 14 years and above. Under 18s will need to be accompanied by a responsible adult. The walk will last for 2 hours and is relatively short (2km in total). It will cover a difficult walking terrain as partly on the rocky chalk shore.

How the Railway Boom (the dotcom bubble of the Victorian age) led to a circus superstar in Margate, The Lion Queen, elephants on the beach, and the Dreamland we know and love today. Taking in Pleasure Gardens, Lord Sanger’s Circus, the Dreamland CInema, and today’s Travelling Showmen.
A gentle walk on pavements, lasting about 1.5 hours, led by experienced local history walkers. Pay on the day – £8/£5 conc.

An epic musical fantasy about the incredible story of Elton John’s breakthrough years. The film follows the fantastical journey of transformation from shy piano prodigy Reginald Dwight into international superstar Elton John. This inspirational story — set to Elton John’s most beloved songs and performed by star Taron Egerton — tells the story of how a small-town boy became one of the most iconic figures in pop culture. Also starring Jamie Bell (Billy Elliot) as Elton’s longtime lyricist and writing partner Bernie Taupin, Richard Madden (The Bodyguard, Game of Thrones) as Elton’s first manager, John Reid. From the (uncredited!) co-director of Bohemian Rhapsody and Sunshine on Leith.

A father and his daughter struggle for survival in deep space. Monte (Robert Pattinson – Good Time, Twilight, Lost City of Z) and his baby daughter are the last survivors of a damned and dangerous mission to the outer reaches of the solar system. The crew of death-row inmates led by a doctor (Juliette Binoche – Hidden, The English Patient, Three Colours: Red) with sinister motives has vanished. As the mystery of what happened onboard the ship is unraveled, father and daughter must rely on each other to survive as they hurtle toward the oblivion of a black hole. A staggering and primal film about love and intimacy, suffused with anguished memories of a lost Earth, High Life is a haunting, thrilling achievement from visionary director Claire Denis (White Materials, Let the Sunshine In, Beau Travail)

Jasper Carrott’s Stand Up and Rock

Stand Up & Rock sees  Jasper Carrott back live on stage with a new stand up show and performing alongside his musical compatriots that have been rockin’ audiences all over the world.

Come along and browse the antiques and collectables. 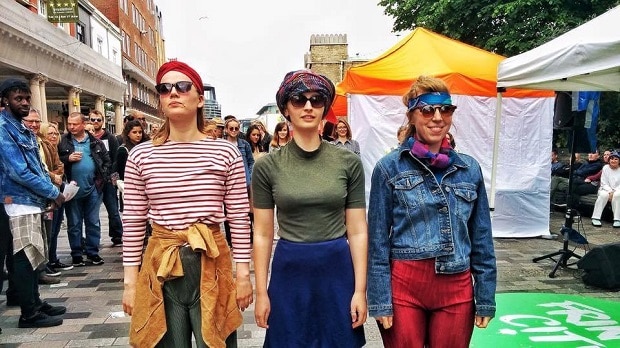 Immerse yourself in a playful and joyful dance experience as performing arts trio Tick Tock Bridget take you on a journey  in their pursuit of ‘Rejoining Jane.’

Together they delve into her story, travelling from Bromley to Papua New Guinea (via Ibiza) with various escapades and secrets that unfold along the way.

Prior to the theatre show a creative storytelling workshop will take place which is open to all.