Masked protesters have held a silent demo outside Turner Contemporary today (June 1) to highlight what they say was maladministration by the Department of Work and Pensions in the way changes were introduced to raise the state pension.

The demo also marked those women who have died during the campaign to get compensation due to the ‘unfair’ process .

The protest, using plain masks to show the message ‘no face, no voice, no pension’ was organised by the East Kent Waspi (Women Against State Pension Inequality) group.

The group says  women, particularly those born in the 1950s, have been unfairly hit by the government legislation raising the retirement age, they say they did not receive proper notice and many have been left in poverty.

In a March 2015 report on Communication of State Pension age changes, the Work and Pensions Select Committee concluded that “more could and should have been done” to communicate the changes.

Campaign group Backto60  has initiated legal proceedings into the process, which will be heard in the Divisional Court next week.

Backto60 has brought the Judicial Review case, which will examine whether 3.9 million women born in the 1950s were appropriately communicated with regarding changes to the state pension age that result in a later retirement.

Up until 2010 women were eligible for their state pension when they reached the age of 60 but changes have seen this rise with the age at which women qualify for the state pension now 65, rising to 66 in October and  67, for men and women, by 2028.

The government says the aim is to bring the retirement age for men and women in line. Increasing life expectancy means the government needs to make pension payments later in a person’s life.

In December Work and Pensions Secretary Amber Rudd said: “With the Government facing increasing financial pressures, it is simply not justified to reverse these changes, especially when we take into account that women who reached State Pension age in 2016 are estimated to receive more State Pension on average over their lifetime than women ever have before.

“We will be making no further changes to the law on this issue. Doing so would mean working-age people, especially younger people, bearing a greater financial burden to support the rising costs of the pensions system.”

However two Private Members Bills have also been presented to Parliament asking for the arrangements to be reviewed and for costings for a compensation scheme to be undertaken.

The Judicial Review will be heard at the Divisional Court in London on June 5-6. 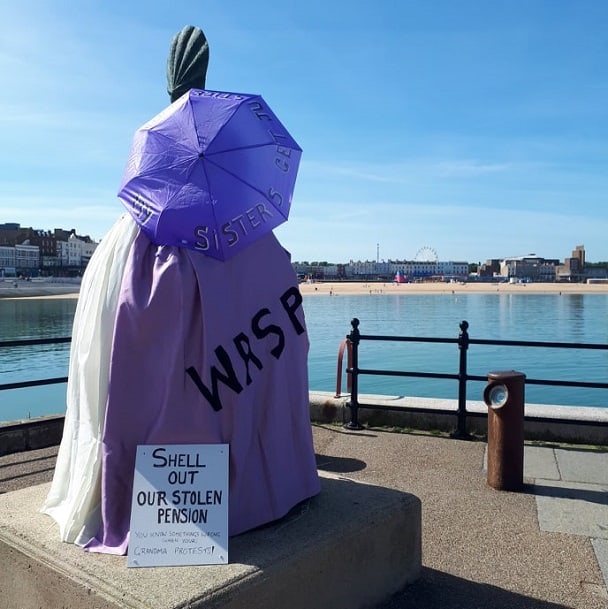 Margate’s Shell Lady also received a make-over for the demonstration with a Waspi dress, umbrella and sign.