Grey skies and rain failed to deter thousands of Thanet’s residents from turning out to the Ellington Park May Fayre last Sunday (May 19).

The popular event organised by the Friends of Ellington Park – and celebrating its tenth year – featured more stalls, attractions and entertainment than ever before.

One such crowd-puller was the “Silver Spring” marquee run by Kent Coast Volunteering, which housed everything from chair exercises and line-dancing, to laughter yoga and an arts and crafts area.  Meanwhile, staff and volunteers were also on hand to share information on the support available for Thanet’s older residents, via the National Lottery Community funded project, Thanet Community Support Partnership (TCSP). 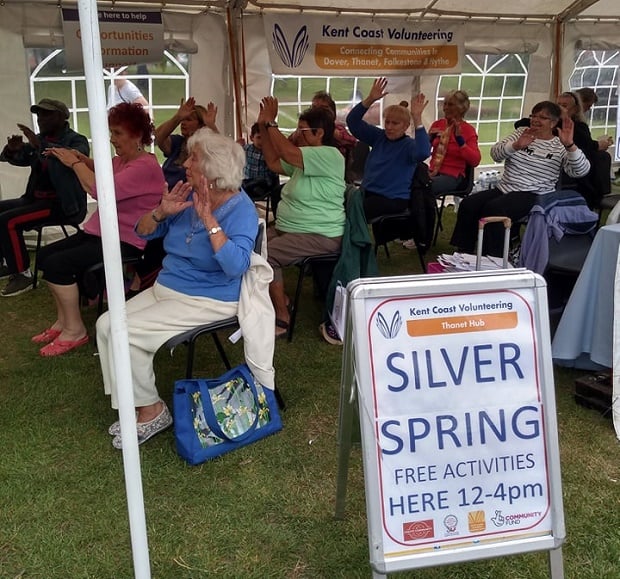 TCSP project coordinator Chris Scutt said: “We are really delighted to have played a part in such a wonderful, treasured community event.

“Kent Coast Volunteering was there to help connect people with the wealth of social and leisure activities on offer in Thanet, especially ones suitable for older and isolated people in our communities.

“Thanks to the May Fayre and the Friends, we were also able to showcase a few of the many exciting volunteering opportunities available within the Thanet community – so it was a very successful day for us all round.”

Friends of Ellington Park chair Beverley Perkins said: “We were only too happy to have Kent Coast Volunteering at the May Fayre this year.  Their marquee and the activities they had going on in there were certainly impressive and made for a great addition to the event.”

But there were many other opportunities for people of all age groups to have fun at the Fayre.  With over 90 stalls, a funfair, live music throughout the afternoon, and the Ellington Park Bookshop having sold nearly 700 books on the day, there was something for everyone. 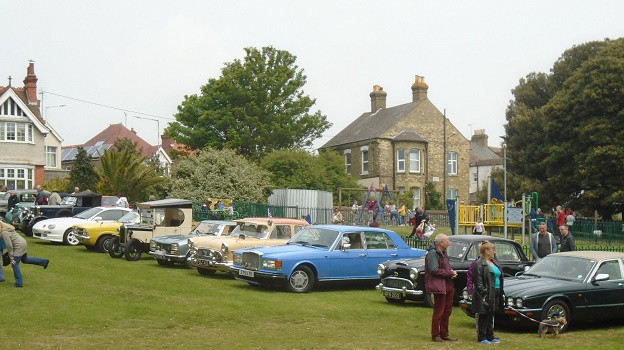 For the four-legged event-goers, the Fun Dog Show run by Angels 4 Dogs Rescue was bigger and better than ever, with new categories including “Miss and Mr Ellington Park”.  And for fans of four-wheeled vehicles, ROMMCC (the oldest old motor car club in Thanet) made their Ellington Park debut with a stunning array of classic cars on show.

Beverley said: “Thank you to all the marvellous volunteers, without whom the event would never have taken place.  Thank you also to the people of Ramsgate and beyond who always turn up and support our events whatever the weather.”

You can find out more about the Friends of Ellington Park by emailing friendsofellingtonpark@gmail.com or visiting them on social media: @FofEPRamsgate.

To find out more about Kent Coast Volunteering, you can phone 01843 609337, email info@kcv.org.uk or look them up on social media: @ThanetCommunity 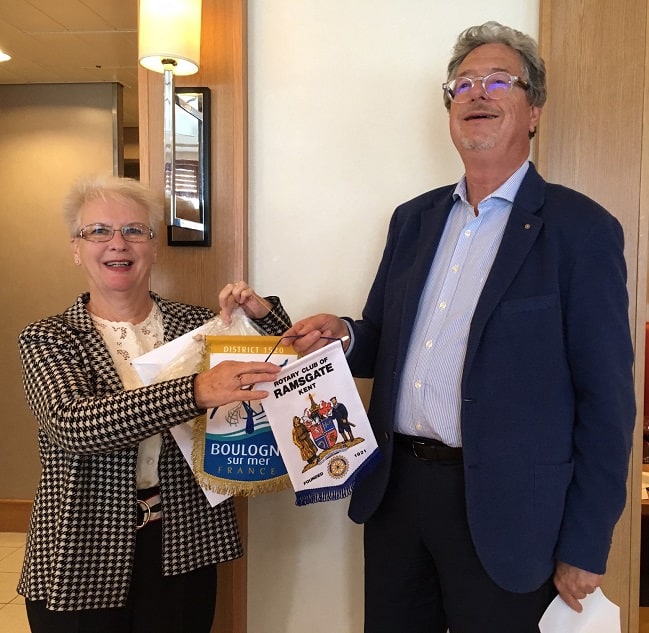 The long-standing twinning link between Ramsgate and Boulogne Rotary Clubs, was  strengthened when the two clubs held a joint meeting on board P & O ferry Spirit of France, between Dover and Calais.

The Ramsgate members boarded the ferry at Dover, and Boulogne members were already  waiting. They  enjoyed a joint meal ending in time for the French to leave the ferry when it returned to Calais, leaving the Ramsgate team to enjoy the benefit of Club Class on the journey back to  Dover.

Past President David Read made  the Ramsgate arrangements with President Pat Hersant  among those who took part.

She is pictured with Boulogne President, Alain Laurent.

Members of Ramsgate Rotary Club were also  given a real insight into the tremendous work being put in by staff and volunteers at Quarterdeck Youth Hub in Zion Place Margate when  they held their weekly meeting at the Hub.

It included a meal, prepared and served by members of staff volunteers and some young regulars at the hub.

Members learned about some of the many activities which are held on a regular basis. They include football sessions, youth club, chit chat sessions,  well-being activity sessions, and even an opportunity for some  to undergo the Duke of Edinburgh Award Scheme.

The Club is now considering giving some financial support to the scheme, which is financed to a certain extent by Kent county council.

President  Pat Hersant expressed the club’s thanks to all those who has been involved with such a successful evening, which had been organised by President Elect Henry Golding. 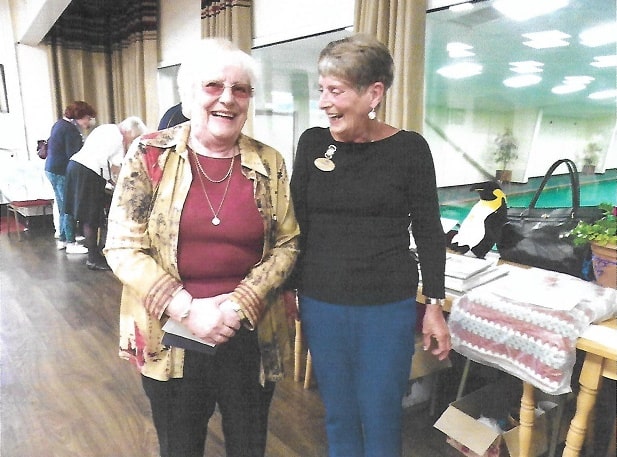 On Friday, May 3 the Inner Wheel Club of Margate held their annual Silent Auction at a new venue the Indoor Bowls Club at Cliftonville.

The event was well supported by by ladies’ from Inner Wheel Clubs from Thanet and an excellent meal was enjoyed by all.

As a club we have enjoyed several social events including a film show and many “get togethers” including craft afternoons helping with the Rotary Blossom Tour, Ten Pin Bowling and afternoon teas and plant sales. Shortly we will be enjoying another social event, a lunch at a village inn.

Inner Wheel are actively seeking new members looking for a sociable evening and friendship once a month. Please come along to our dinner meetings at Lester’s Pub which are held once a month at 6.00pm on the second Tuesday of the month. The next meeting will be on Tuesday, July  9 at 6pm.

Lots of laughter was the order for today at the TOFFS “Dying Matters Awareness” event.  More than 50 people attended the TOFFS meeting at the Margate Baptist Church, opened by  Mandy Williams, Head of Education and Training Pilgrims Hospices, Canterbury.

Mandy said: “The Dying Matters coalition was set up by the National Council for Palliative Care in 2009 to promote public awareness of dying, death and bereavement and was funded by the Department of Health.  It is now part of Hospice UK.  It was set up in response to research which showed that many people do not die where they want to or get the care they would like at the end of their life.  A large part of this is because they were uncomfortable talking about death, so as they neared the end of their lives, their loved ones did not know what their preferences were.  Dying Matters’ mission is to help people talk more openly about death and to make plans for the end of life.”

50 % of British adults prefer not to use the death word and that we have substituted it with:

So, 10 years on since the Dying Matters Coalition started, how are we doing…? Well we are not there yet, but we are making progress, proved by the growth of events such as this meeting today and like many more taking place around the country.

TOFFS showed two short films as part of Dying Matters Awareness Week. ‘Dying for a Laugh’ in which comedians Ardal O’Hanlon and Jenny Éclair … tackled the subject of death, and ‘I Didn’t Want That’ a poignant and powerful short film highlighting the importance of making your end of life wishes clear.  Laughter is an ideal way to open up discussion – and help reduce fears.

Our guest speaker was Kyla Szukala who works for Pilgrims Hospice in Margate as a Complementary Therapist.  However today at the Dying Matters Awareness TOFFS event Kyla gave us an insight into her role as a Soul Midwife.   Soul Midwives are non-medical, holistic companions who guide and support the dying in order to facilitate a gentle and tranquil death. We listen, provide gentle therapeutic techniques such as Reiki and ensure compassionate care at all times in a non-medical holistic approach.

We support families and their loves ones, giving loving care with a human touch.  We provide comfort, continuous support and reassurance in helping a dying person to experience the death he or she wants.

A big part of the role is encouraging people to view death not just about the physical thing, not just about the body but to see it as an adventure, our body is a vessel to a more beautiful thing.  The personality of the people is the soul and we want to focus on this importance.

A member of the audience asked: “Does being a soul midwife conflict with a person’s religious / cultural belief?” Kyla replied: “No as we work as a non-denominational, multi-faith practitioner who honour the dying person’s beliefs.”

As a soul midwife, Kyla went on to explain that even though we all die there are good deaths and not such good deaths.  Most of us hope to die, pain free, at home, or somewhere special that holds loving memories, with our families around us.  But this is not always possible.  It is the role of the Soul midwives to ensure that death is a dignified and peaceful experience.

As part of the event there were market information tables providing information from Boys and Maughan Solicitors, Gores Funeral Services, NHS Organ Donation Service, Kent Humanists, Survivors of Bereavement of Suicides (SOBS).  Big thank you to everyone who was part of today’s event and extra big thank you to our volunteers who make it happen!

TOFFs next public meeting is on Wednesday, July 10 at 1.30pm at the Gap Centre, Broadstairs Baptist Church Queens Road, Broadstairs, CT10 1NU.  Our keynote speakers will “Help us to understand what our local and East Kent NHS services will look like and the improvements the current proposals will make.”