A bid to persuade Thanet council to declare a climate emergency and begin action to prepare the local authority to become carbon neutral by 2030 will be made at a meeting on July 11.

Labour councillors, backed by Green councillors, will put forward the motion at the next full council meeting.

Opposition leader Cllr Rick Everitt said: “The new council faces many important issues and challenges which we will address in various ways in the coming weeks and months, however there can be no greater priority affecting the whole of Thanet than the threat from climate change. This may be a tiny step in the context of a global problem, but we believe the council should take a lead; action to reduce carbon emissions will also help make Thanet a cleaner and more pleasant place to live in the short term.”

The Labour motion calls on the council to:

The 20-strong Labour group has  been backed by the three Green councillors. 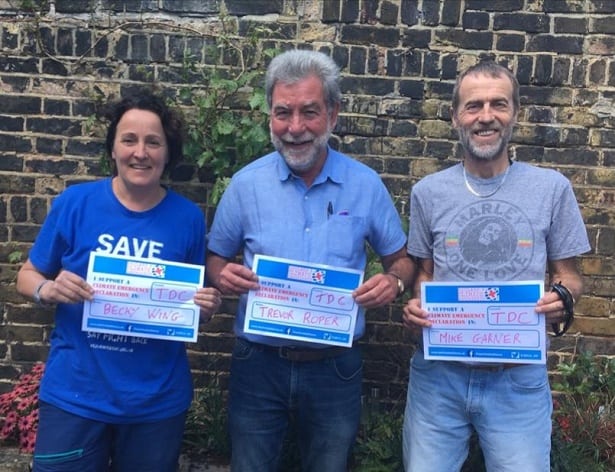 Green Party spokesperson Cllr Mike Garner said “Climate Change is the most important issue we face and needs to be tackled head-on. We cannot afford to sit back and wait for the Government to act: we need to take action now. We look forward to working with all Councillors to make sure this motion passes and that effective measures are enacted to ensure the Local Authority becomes carbon-neutral by 2030.”

The draft Kent and Medway Energy and Low Emissions Strategy is due to go out for public consultation in early June.

It makes the link between the supply of energy for housing, industry and transport and air quality, recognising that reducing emissions from the former will lead to improvements in the latter.

KCC’s deputy cabinet member for the environment Michael Payne said: “The challenge of balancing the pressures of development against the impact on our environment and health has been recognised for many years.

“Different sectors are already taking action to reduce their impact on the environment, but our evidence shows that this activity with our partners needs to be better joined up, as well as expanded and accelerated.

“Kent and Medway face some important challenges including some areas with poor air quality and levels of fuel poverty.

“The increasing number of severe weather events such as flooding, water shortages and rising temperatures must also be taken into consideration.”

The consultation is due to launch on June 11 for 12 weeks until September 2, with a final draft strategy to be agreed in October together with the implementation plan to ensure its delivery for the future.